Blog - Latest News
You are here: Home1 / Article Archive2 / I was there3 / A Tri Pacer is not an Alaska bush plane 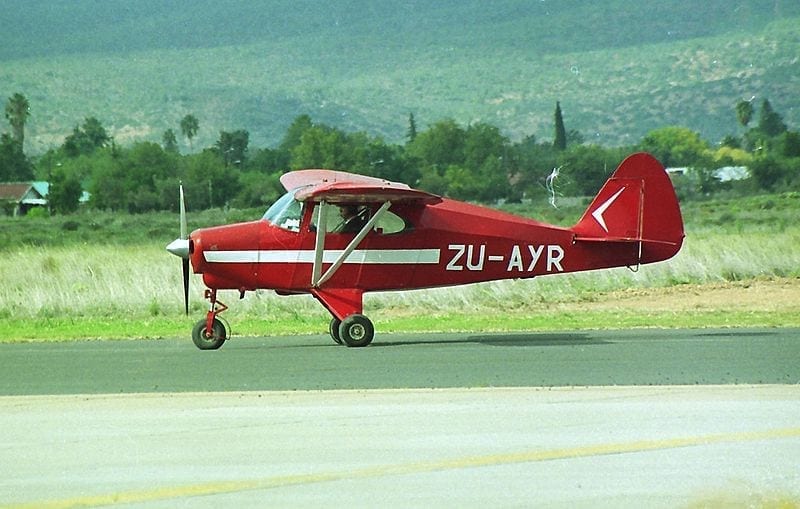 It was a really lousy Sunday morning, weather-wise, when our telephone rang with an alarming insistence. The caller was a tearful Peggy Brown, the wife of my good friend George Brown. A little tangent is in order here…

George Brown was the owner of a local fast food place named The Lucky Wishbone. George’s little restaurant was already a landmark in Anchorage, Alaska, in 1961. Fifty years later, George still went to work there early each day, and put in a full day working right alongside his other employees. He died last year at 96, but he flew his own Cessna 180 on wheels, skis, and floats well into his 90s. In short, George was a piece of work. As an architect, I designed a home for George and his family. He lived in it until his death.

George Brown worked in his restaurant well into his 90s.

George flew “the hump” in the old US Army AC-46s and B-24s during WWII; and he was for many, many years a skeet and trap shooter of national acclaim. But back to this tale…

Between sobs, Peggy told me that George had taken their little two-place Piper out the day before to scout out some new duck hunting sites. She knew that he had planned to cross Turnagain Arm and poke around at the many lakes that lay close to the coastal mud flats there. I knew it was a truly great place to hunt waterfowl, but it was quite far from George’s usual stomping grounds across Cook Inlet and perhaps 30 miles to the west.

George had flown out at mid-morning the day before, and should have long ago returned to Anchorage. With snow and a very low overcast, Peggy had reason to worry, I suppose. Of course, George was no newcomer to such flying conditions, but it was indeed unusual that he hadn’t yet returned.

I promised Peggy that I would saddle up and go have a look for her missing hubby; and that I’d call her with any news as soon as I got back. The weather was bad enough that I knew I’d need additional eyes for the search, so I called Bill “Sugarfoot” Shirley and Bob Farmer, both friends of George. I’d meet them at the Piper distributor at Merrill Field, where I planned to rent an airplane for the search.

The only plane available to me was a wheel-mounted Piper Tri-Pacer, certainly not the best of all bush planes! Still, it was a flying machine and I took it. After a careful pre-flight, and having topped the tanks, we boarded and looked at the very discouraging weather around us. A Special VFR (Zone Departure) would get us away from Merrill Field, but we got only six miles, where we landed again at Anchorage International Airport to lay in a little pie and coffee while waiting for just a little break in the weather. After about half an hour, we got that break and took off before the weather could come down on us again.

While climbing for the usual 2,000 AGL for the Turnagain Arm crossing, we slammed into the overcast in no uncertain terms. The little Tri-Pacerhad an altimeter, rate of climb, directional gyro, and the usual gaggle of basic instruments, so I made most of the crossing in the white and on the few gauges available to us. After making the 15-mile crossing, I throttled back and descended to see if I could find any visibility at all below the overcast. The heavy snow didn’t help, but we broke out at about 500 feet to a reasonable sight picture of the world below.

It was all white on white, of course, but it wasn’t quite a whiteout, so we were in tall cotton for our search. And it didn’t take long to find George’s Piper, tipped up on its nose and with no one around. George’s landing hadn’t resulted in anything that looked life threatening, but I couldn’t tell that from the air. I set up for a landing near his plane.

The landing was a short one, of course, given the two-feet-deep snow cover. We all piled out and began reading the signs around the plane. Clearly, George had fallen victim to the deep snow. It was also clear that another plane had landed near him, picked him up, and flown away. Since Peggy had called me, I had to presume that the pilot who picked up George had taken him to nearby Kenai, farther south on the Kenai Peninsula. Well, at least I could now call George’s nervous wife with the good news about his health.

A Tri Pacer is nobody’s idea of a bush plane.

We again loaded aboard the Tri-Pacer and I torched off the little engine. Taxiing took almost full throttle, and there was no way in which the plane would take off with the pilot and two passengers. We were now stuck on George’s choice of lakes. I suspected that we might have made the takeoff with a Piper Pacer, but with a nose gear poking down up front, there was no way we were leaving that small lake in our small, four-place tricycle-geared flying machine. I starved the engine out and we all stepped down to the snow-covered lake.

It was less than 15 minutes later that we heard an approaching aircraft. We looked down the lake toward the south and, sure enough, there came a ski-equipped Piper Super Cub, already letting down for a landing on our lake. When it had slid to a stop, the engine was shut down and the pilot opened the bi-parting door and stepped down to the snow-covered lake. I immediately recognized Andy Anderson, one of Alaska’s best known pilots. Andy would save my bacon once again in a few more years when I had flopped a wheel-equipped Cessna 170A over onto its back in deep snow at the Mills Creek Mine strip up near Mt. Denali.

It seems that Andy had seen George’s airplane tipped up on its nose at the northeast corner of the small lake. He had stopped to investigate the situation and had found George, needful of a lift out of the little unnamed lake. Andy had flown George back to Kenai, where he would wait for commercial flight back to Anchorage.

Andy loaded my two passengers into the single back seat of his Super Cub and lit out for Kenai once more. After takeoff, I’d follow them south and pick up the pair of them at Kenai for the return flight to Merrill Field.

With the two passengers now gone, powering the Tri-Pacer off the small lake was anticlimactic, and I was soon letting down to a landing on the Kenai airport. The days in that part of Alaska are still pretty short, and it was full dark when I loaded the two into the little Piper for our return trip to Merrill Field. About 15 minutes out of Kenai, and cruising at 2,000 ft. AGL, I noticed the visibility becoming somewhat hazy. I hit the landing lights and, sure enough, it was snowing pretty heavily again. I turned off the landing lights and, in only another minute or two, I noticed the heavy glow around the running lights. The closer I got to Anchorage, the harder it snowed. This was no place for a guy banging around up there without a full panel, so I turned back toward Kenai again. We would find motel accommodations until the following morning.

After arriving back in Anchorage the following day, I immediately called Peggy Brown, who told me that George had already made it home and was even then working again at The Lucky Wishbone. George would later mount his bent propeller on a wooden plaque and hang it on his restaurant’s wall. It was there for many years.

Go or No Go: winter warm front
Scroll to top