Blog - Latest News
You are here: Home1 / Article Archive2 / Dick's blog3 / Personal or business: is one riskier than the other? 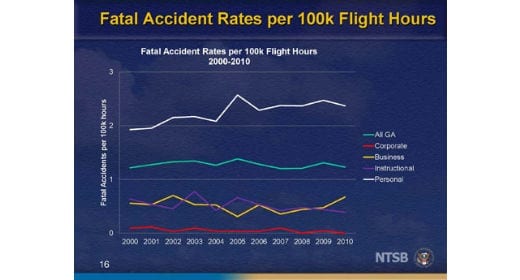 Someone called my attention to an Avemco-sponsored newsletter that makes some ridiculous assertions. One is that aviation publications do not accurately report on the safety record in general aviation, painting a brighter picture than exists. Only this newsletter tells it straight.

That is a sanctimonious and incorrect observation. I have been writing for aviation publications since 1958 and have continuously editorialized about the poor safety record in general aviation flying. I have even been accused of making it look worse than it actually is.

The NTSB says “personal” flying is far more dangerous than “business” flying. Is it true?

It might be true that associations have downplayed the unfortunate safety record but I think even that is getting better.

Worse, the newsletter perpetuates the myth that personal flying has a far worse safety record than business flying by like pilots in like airplanes on like missions. Business flying is defined as that flown by a nonprofessional pilot for business reasons.

That myth is supported by NTSB graphs showing what they call the relative records of personal and business flying. It shows the fatal accident rate in personal flying to be four times worse than in business flying.

All business flying is for transportation so the only comparison that would have any meaning would be between transportation flying for business and for personal reasons.

I have done more research on the accident records than anyone and learned long ago that there are few absolutes. The safety potential of any flight is affected by countless variables, none of which relate to whether a flight is for business or pleasure. I have read every fatal accident report issued since 1958 and have never seen any indication that there is a safety difference between the two activities.

One variable that I have seen mentioned is the pressure on a pilot to “get there.” This, though, would exist in both forms of flying. There would be no difference in wanting to get to Thanksgiving dinner and wanting to get to a big meeting to close a big deal.

I have developed accident rates for individual airplanes, using hours flown by type from Aircraft Bluebook, fleet size from Vref, an aircraft value reference, and personal examination of the fatal accident records.

Fatal accident rates vary widely among types that are used for both business and personal flying, accurately reflecting how the airplanes come out while being used as they are by the pilots who fly them. There was nothing found in this research that suggests any difference in risk between using these airplanes for business or personal reasons.

For a fact, the Cessna 172/Skyhawk has the best record that I researched at .56 fatal accidents per 100,000 hours and it is probably flown more than other airplanes for personal reasons. (It does fly in instructional flying which has a stellar safety record but that is a relatively small use of a huge fleet of 172s.)

The airplane was owned by the business, but was it on a personal trip? Who decides?

I suspect that disdain for personal flying has some background in the oil crisis of 1973. Because of an Arab oil embargo, the politicians tried to scare everybody silly about the availability of fuel. Draconian cuts were threatened for general aviation.

Russ Meyer, who would later head Cessna, led the fight to preserve our fuel supply. One of the keystones of his strategy was to show that most GA flying was serious business and vital to the national economy. Pilots flying for personal reasons almost felt like they had to take their peanut butter and jelly sandwich along in a briefcase and never smile when within 500 feet of an airplane.

Something else precludes rational thought on this subject. If a person flying an airplane owned by his business crashes on a trip to the beach, business flying likely gets credit for the hours and personal flying gets credit for the wreck. I am sure nobody who uses a business airplane has ever flown for monkey business but that remote possibility could skew any numbers on the subject.

Recreational flying is a different matter. Everything is in the personal column there and when pilots seek enjoyment by playing with their airplanes it opens up a wide variety of hazards when compared with transportation flying. The risk here is easily managed by flying the airplane well within its envelope but, sadly, many pilots fail to do that.

It is my thought that the risks pilots want to take are their own business. There is great personal freedom to be found in flying and that is as it should be.

Really, all flying is private or personal flying, too. The company that took delivery of the first Gulfstream G650 bought the airplane because somebody wanted it, not entirely because somebody truly needed it. Few businesses would own an airplane unless the manager or management wanted an airplane. That makes it all personal which means the business/ personal comparisons relate only to the deductibility of the flight for tax purposes.

My contention is that this has no relationship to the relative safety of a flight. What do you think?

A memorable flight
Scroll to top