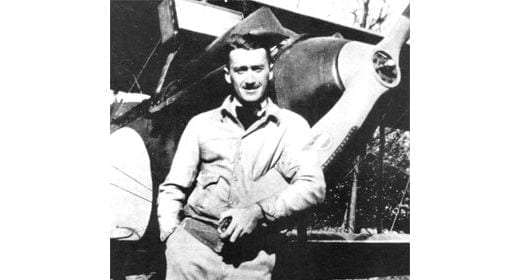 Foster Lane was born in 1903, the year the Wright Brothers changed everything with their first powered flight. He started flying in 1925, getting his first ride in a barnstormer’s Curtiss JN4 Jenny. Lessons began and he bought his first airplane, a used Waco 9, in 1928. He literally lived the birth of aviation in the 1920s.

Foster Lane was an aviation pioneer.

Starting out as a starving barnstormer flying the hills and dales of Ohio, he then moved into more steady work as a flight instructor and company pilot at various operators in the Cleveland area. Most of the airplanes were OX5 powered so Foster became very proficient at forced landings. During the roaring 20s, new flying opportunities kept coming his way. He flew everything he could get his hands on. Of course, the Great Depression had other ideas and in 1929 Foster found himself struggling to make ends meet in what was a fledgling industry.

Foster persevered and with the help of his new wife, Ruth, launched Lane Aviation in Columbus, Ohio. It was a rocky start, but they put their hearts and souls into the business.

When WWII broke out, Lane Aviation had to relocate to Don Scott Field, now The Ohio State University airport. They were a Navy War Training Services contractor and trained over 1000 pilots in primary, secondary, cross-country, and aerobatics courses before the war came to a close.

Foster and Ruth moved the business back to Port Columbus and in the post-war general aviation boom they became big-time aircraft dealers, selling hundreds of aircraft.

Aircraft changed dramatically from the time Foster first broke the surly bonds of Earth to when he hung up his spurs at 91 years young. Airplanes were fragile arrangements of wood, fabric, and wire. Stress analysis wasn’t even considered, and stability and control were up to the pilot. Foster was front-and-center when it came to many of the improvements in safety and reliability we saw over the years.

Foster witnessed our airspace system come of age as well; starting with nothing and progressing all the way to our current construct of land and space-based precision navigation.

In his 70 years in aviation, he witnessed many accidents and lost friends, but he always tried to learn from each situation and move forward.

He continued to build his business up to the day he passed.

To say that Foster has done it all in aviation, is an understatement. He was an accomplished barnstormer. He was a prolific flight instructor, teaching hundreds to fly, many of whom went on to airlines or war. He was also an aerobatic pilot. He flew charter before there was such a thing as FAR 135 regulations. He conducted test pilot duties for a few of the manufacturers. He flew worldwide delivering new Cessnas, taking Ruth with him on many of the trips. They were dealers for Piper, Cessna, Waco, Republic, Culver, Taylorcraft, and also Navion.

In 1995 Foster passed away at 92, holding a valid medical certificate right up to a year before he died.

One of his legacies is his massive FBO facility that lives on at Port Columbus. Lane Aviation has been in business continuously for 78 years and is still owned by the family. They also have a satellite facility at Rickenbacker airport on the southeast side of Columbus.

Foster Lane was a true aviation pioneer and ambassador who helped forge the industry we know and love today. Hats off to one of the unsung fathers of general aviation. God Speed Foster Lane.

Personal or business: is one riskier than the other?
Scroll to top