Blog - Latest News
You are here: Home1 / Article Archive2 / Opinion3 / Why do we stink at being safe? 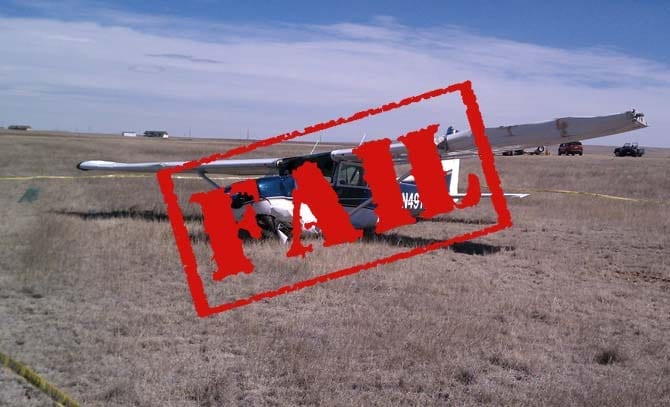 Pilots are an interesting sub-species of human. Although every pilot has his own unique traits, there are certainly some strong stereotypes that apply to almost all aviators. Unfortunately some of these characteristics are diametrically opposed to safety.

When we examine it, many of the attributes that lead people to flying also cause us problems once we get our licenses. Things like competitiveness, over-confidence, impatience, goal-orientation, and self-reliance all show up, sometimes with disastrous results.

We stink at safety because we are human.

Why is this a problem? It doesn’t take a PhD to see that the vast majority of accidents are pilot-induced and it has been this way for a long time.

Now that we humans have been identified as the weak link in the chain, the industry went to work and has since coined the term “Human Factors.”

Human Factors is the science of creating systems that are human-error resistant and/or tolerant. Systems include aircraft hardware, software, checklists, procedures, and policies. Human Factors design accounts for, and sometimes even anticipates, human-error.

The reality is there are so many tentacles to Human Factors that it would take volumes to explain it thoroughly.

So with over three decades of industry awareness and research, what’s the story with all these pilot-induced accidents?

The bad news is Human Factors, and many of its spin-off benefits, have just not trickled down to most GA cockpits. Why?

For starters, the research and the solutions are focused on commercial flight decks; that makes sense: large craters are a bigger problem than smaller ones. But now that the big boys have their act together, the regulators are turning their attention to us. They are wondering why general aviation airplanes are drilling holes in the ground at a rate of over one a day. Good question!

The predominate answer is the same–Human Factors. As a beneficiary of Human Factors methodologies in my day job, I am certainly an evangelist for this approach; however, implementation in the GA community has remained elusive. Understandably so, doing risk assessments, chanting safety mnemonics, and doing two-crew challenge-and-response checklists in your Cub isn’t what most of us signed up for.

Terms like Situational Awareness, Plan Continuation Bias, Threat and Error Management and Crew Resource Management are not in the vocabulary for most private flyers and that’s ok. Most of it is just old fashioned common sense anyway. The problem is we don’t consistently apply common sense and, when we don’t, the system doesn’t trap it.

What is the solution? If I knew, I would bottle it up, sell it and retire to a nice grass strip with a fleet of airplanes.

I will offer a couple of thoughts:

Does your airport have a culture of safety?

We all know that most of the folks who are disassembling their machines across this great land aren’t getting the message that articles like this intend to convey. So maybe we can apply a little peer influence. I didn’t say harassment or snitching, rather a more subtle approach, like bringing these folks into safety conversations, leaving an article or two laying around for them to find, or just plain-old leading by example. If it’s really bad I leave it to you to handle the overtly careless or reckless among us.

What if we change the culture to one that is more safety oriented? Maybe organize a safety standdown at your local airport or put on a safety seminar–talk it up–create some buzz! If everyone is mindful of safety it’s hard not to get sucked in, at least a little. Even a small influence might make the difference between shiny-side-up and worm dirt. If all of us did something small like this, it will move the needle incrementally.

We’d love to see your thoughts and ideas in the comments below.

If we don’t make some improvement to general aviation safety, the regulators, who are not motivated by protecting your personal freedom to fly, will be compelled to “help” reduce the rates–not something anyone wants.

So to answer the question: “Why do we stink at being safe?” It’s because we are human.

Now you know why the UAVs are on their way, but that’s a topic for another article.

Brent Owens is a professional pilot and creator of http://iflyblog.com