Blog - Latest News
You are here: Home1 / Article Archive2 / I was there3 / A memorable flight 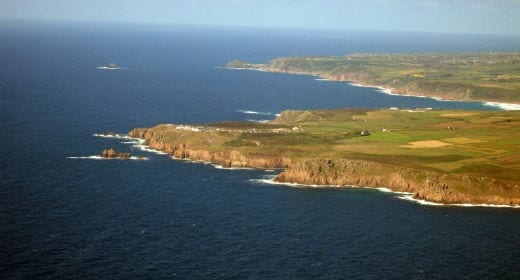 It was a crisp, clear January day.  When I arrived at the airport the frost was glistening on the wings of the plane, the temperature had just risen above freezing and the warmth of the sun was just beginning to render some hope that it might become flyable that day.

A unique place to fly – Land’s End in southwest England.

The day before I had flown down to St Just Airport at Land’s End, the southernmost airport on the mainland UK. As a newly-minted private pilot, the flight had been quite a challenge. A winter cold front was approaching with lowering cloud bases and poor visibility but one of my best friends was getting married that evening and I just had to be there. After all, that was what I got my license for.

Now here I have to digress a little and explain that across most of the UK there is no high ground. The highest mountain is Ben Nevis and that is way up in Scotland and rises to a majestic 4000 feet but in the south of England you are struggling to find anything over a few hundred feet elevation. Add to that the airspace restrictions that have class A airspace down to the surface around London and then rising slowly through 1500′ and 2500′ as the airways spread out from Heathrow and Gatwick, it was not at all unusual for a pilot like me to have never flown above 3000 feet. So a 250 mile flight down to the West Country at 2000′ descending to 1000′ under a low overcast was interesting but not outside of my comfort level.

Getting back to the day in question, it isn’t often that you get those really sharp clear days in England, pollution from the industrial regions of Northern Europe combined with a very moist atmosphere more often than not leads to poor visibility even on the sunniest of days, but this day was different. The cold front had passed during the night and the crisp, clear air promised a beautiful flight if only I could get the frost off the wings.

By noon things were looking good. Although the air temperature was still only just above freezing, most of the frost had melted off the wings in the direct sunlight and with a little bit of help from a window scraper that I had borrowed from a helpful motorist I felt my AA5 Traveler was ready for flight. The layout at Land’s End airport is interesting. There are four intersecting grass runways and a kind of hump in the middle of the field that means you always feel that whichever way you are pointing you are on a very short runway. Today that was not an issue, the little Traveler with its 150 hp Lycoming was off the ground in no time at all and climbing away at nearly 1000 fpm in the crisp cold air.

It simply took my breath away.

I couldn’t get enough of the view. I kept climbing way out of my comfort zone until I reached the giddy heights of 7000 feet, by far the highest I had ever been. From there I could see almost the whole of Southern England, I picked out towns that I recognized, I saw the Isle of Wight way off in the distance. Everything was crystal clear in a way that I had never seen before and have never seen since.

Thinking back on my many years of flying and all that I have experienced, I will never forget that day. The simple beauty, the breathtaking views, the exhilaration, the sense of privilege. Nothing untoward happened; there were no in-flight emergencies. I didn’t bust any regs or upset any controllers but, when I look back on thousands of hours flying all over the world, that was a truly memorable flight.

This is one of my memories. I hope that you enjoyed it and will share one of yours.

Editor’s note: share your memorable flight below in the comments section, or write an article and email it to [email protected]

Personal or business: is one riskier than the other?