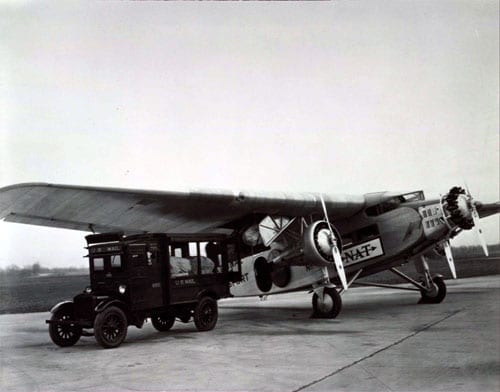 In 1935 I was six years old, and we were living in Ponca City, Oklahoma. One day a Ford Tri-motor flew into our grass airfield and offered rides, at a price, to our “city’s” inhabitants. I, at that age, wasn’t aware of any of this happening, but for some reason my father took me out to the airport to just watch, and I was completely enthralled at the sight of that graceful vehicle leaving the ground, becoming airborne like a huge (though throaty) bird, under perfect control, and returning to gently alight again.

The Ford Tri-motor was popular for hauling people and mail.

This happened pretty often, as the rides just circled our fairly small town, which took a total of about 15 minutes of flying time. I begged my Dad to let me go up in the airplane, and he relented.

Now I was flying, effortlessly (and slowly), like a bird myself, at about 2000 feet above the ground, and was entranced by the ability to see, clearly, so much of the town and the surrounding area. I was completely hooked on aviation from that moment on, and determined that I wanted to be part of it. Perhaps unusual for that age, my strongest desire was to design vehicles like that, but of course then fly my own creations.

As time went on, this meant reading airplane magazines, bicycling out to the airport in whatever town or city we lived in, sometimes being offered a ride, and–despite not quite knowing what it took to be an airplane designer–planning my life to become able to do that.

That included the courses I took in high school to further that ambition (math, aeronautics and engineering drafting) and joining the Army at age 17, at the time of the closing segments of WWII, to serve my country but also to get in on the GI Bill with the intent to get the right degree for my ambition, though I was still not quite sure what that degree would be in. On the troop train ride to the Army post where I would take Basic Training, I was reading one of those aviation magazines, and it told me what I needed was a degree in Aeronautical Engineering.

I volunteered for the Air Corps but, I think because of the drafting courses I had taken, was instead assigned to the Corps of Engineers, probably the next best thing. Following discharge, the GI Bill allowed me to undertake, and obtain, a degree in Aero Engineering.

During my first summer between school years I was attending military camp, since I was in the Reserves (this was better; it was the Air Force Reserves), and had time to learn to fly (as a civilian). During the war, WWII is my war, cars were scarce and I lived in big Kansas City with a great transit system, so I had never learned to drive, including while in the Army, till almost the same time I learned to fly (at age 20).

I attended Wichita University and nearing graduation I got employed, as an engineer, by Cessna Aircraft in Wichita, and got in on what I had thought during school was what airplane design consisted of, that is preliminary design, aerodynamics and flight testing. I soon joined the Cessna Employees Flying Club, continued my piloting development and earned a Commercial license. I also got elected as the Treasurer of the Flying Club, and independent of that, got authorized to fly company airplanes (for ferrying or business trips, but later as a test pilot).

This is where Ponca City entered the picture again, except its airport was now a more thriving place and had a concrete runway, a large hangar or two and good tie-down space. And it was the destination of choice if a thunderstorm with potential hail approached Wichita, and authorized pilots ran out to where completed airplanes waiting to be delivered were tied down to pick a plane, any plane, and fly it to safety at Ponca City (if Ponca wasn’t also in the storm’s path; the cities are about sixty miles apart) to be hangared or at least tied down there.

A couple of pilots were instead assigned to flying the rest of us, in threes, immediately back to Wichita to go back to work, and I was never involved in returning those saved planes from Ponca to Cessna, so don’t know how that was arranged. I’m sure it was more leisurely.

But that approach didn’t always work out, since sometimes the storm arose so quickly that airplanes outside at Cessna field got hail damaged and, I have to conclude, were considered unmarketable. This was great for our Flying Club, because, to the extent that we needed them, the company gave those otherwise new airplanes to us free. It is worth noting that those little dents were unsightly, especially on the easily seen top of the horizontal tail, but the effect on performance was almost unnoticeable.

And having served as Treasurer, I can tell you the company supported its Employees Flying Club in many other ways, too, so that we had rates and rental rules–like no charge for ground time even on long, multi-week trips–that I’ve never seen equaled.(Our honeymoon trip was from Wichita to Acapulco, and had a lot of ground time for the Flying Club airplane we used, but I could afford it under these circumstances.)

Now skip forward in time about 55 years to today, when I recently was induced by this magazine to attend EAA AirVenture for the first time in my life. It was, in all, to be an unforgettable experience for me. Especially since I saw in the advance information for AirVenture that one of those Ford Tri-motors, born about the same time as me in 1929, was to be on static display, and I wasn’t going to miss it.

But miss it I did because on arrival at Oshkosh I found they were offering rides on two other Ford Tri-motors, for a price I judge higher than back at Ponca, and still that was even more something I couldn’t miss. The airplane I rode in had been used as a passenger transport in Central and South America – which didn’t mean it hadn’t given rides around the country in the 30s – and it looked just as I remembered a Tri-motor, with the all corrugated skin, flat sided fuselage, with room for about ten passengers inside, each with a window to themselves, and the highly sloped cabin floor (and narrow central aisle) when in the taxi attitude.

The ride lasted, again, about 15 minutes, but with a lot more taxiing before and after, flying at an altitude of about 2000 feet, and the view was as spectacular to me as I remembered as a child. It was a most satisfying duplicate of my first flight a little over seventy five years earlier, and rekindled that feeling that led me to an equally satisfying career in the aviation business. Only this time I saved the boarding pass.

Make the case for your airplane

Saying goodbye to an airport
Scroll to top