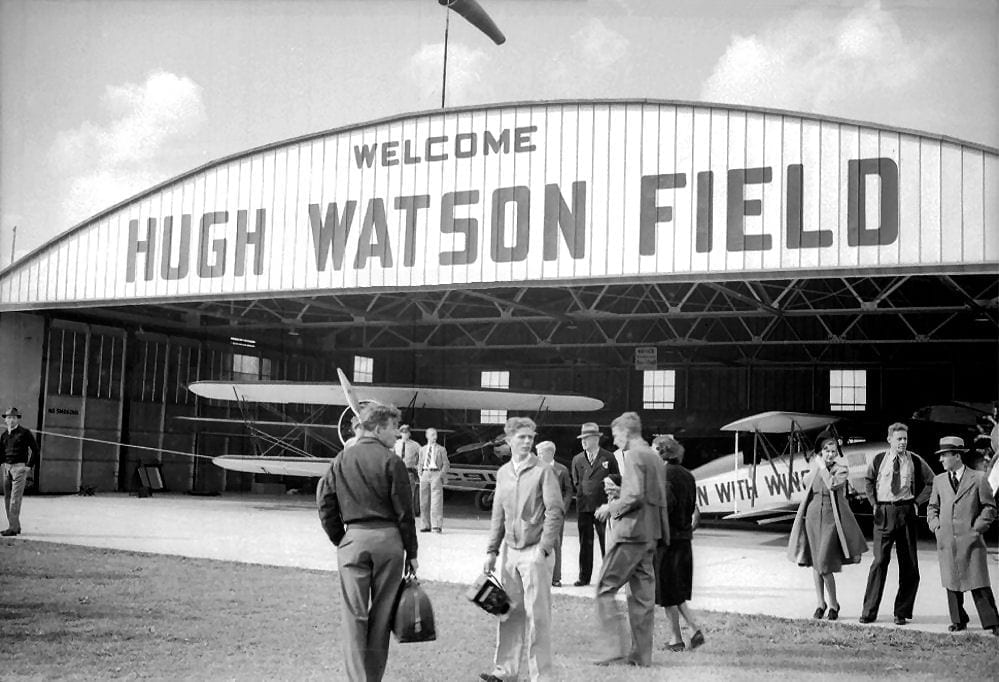 Blue Ash Airport was originally Watson Field, located slightly to the south of its final location.

I’ve been to plenty of funerals in my life, but never for an airport. But that’s the only way to describe what happened last week, when I joined a group of 13 other pilots and six airplanes to make the short flight to Blue Ash Airport (ISZ) and land on runway 24 one last time.

We were there to say goodbye to this old friend, a part of Cincinnati aviation history for 91 years. The next day, the airport would be closed forever.

Pilots are usually a tough bunch, but there’s something about seeing a perfectly good airport get bulldozed that makes us sentimental. The emotions among this group were similar to what you would experience at a funeral for a friend: memories of fun days in the past, regret that you didn’t spend more time with him and sympathy for the family (in this case a flying club and many other based airplanes).

Blue Ash was not my home airport, but it was a special place for me. It was a regular stop when practicing landings or instrument approaches, and I even did my first helicopter solo at the airport. I have many fond memories of the triangle-shaped airport, taxiing through the trees in its large, wooded infield. It was also the closest airport to my home–I’m on four mile final for runway 24–and I spent many summer afternoons in my back yard watching airplanes take off and land there.

The hangar doors are covered with local pilots’ memories, but will soon be gone forever.

Watson Field, as the airport was originally known, opened shortly after World War I on a flat plain just north of the city. Air mail service began in 1928, making Blue Ash (as it later became known) one of the first commercial airports in the state of Ohio. Indeed, Blue Ash was an important part of the rich aviation history in the area, which also includes the Aeronca airplane company, the founding of Embry-Riddle and many other famous names. As Cincinnati grew north, Blue Ash turned out to be ideally located–so much so that it almost became the main international airport in the late 1940s.

But over time, Blue Ash’s fortunes faded. The airport was owned by the City of Cincinnati, but located in the city of Blue Ash. This turned out to be a bad mix, and Cincinnati seemed to lose interest. It began to show in the early 2000s, as the facilities started to crumble but the City turned down federal and state money to fix it up. After years of mis-management, pilots got the message and started leaving. Then, when the airport was run down and all but abandoned, the City claimed it had to close it because there was not enough traffic. This was ironic–sort of like the restaurant owner who never mops the floors wondering why nobody eats at his place anymore.

The real reason Blue Ash is gone is sadly typical–petty local politics and amateur politicians. Most Cincinnati pilots know the truth: that the sale of the airport is needed to finance a hideously expensive (and controversial) streetcar project that many politicians have tied their futures to. Apparently the City can’t afford the $40,000/year loss the airport generates, but it can afford a $110 million streetcar. This $40,000/year loss could have easily been erased with merely adequate management of the airport, but this is what happens when pet projects trump reality.

Any airport closing is tragic, but Blue Ash was particularly so because it should have been a great airport. It was right on major roadways, across the street from dozens of businesses, right in the heart of the city and close to upper-middle class neighborhoods. The fact that three other airports in the southwest Ohio region have succeeded with worse locations shows how poorly the City managed the airport and how poorly understood the value of airports is in America.

The ramp is empty at Blue Ash the night before it closes.

In the end, the details of Blue Ash aren’t that important. For the most part, the story is always the same when an airport goes away: they never come back and they’re usually not mourned for long. Most residents won’t give it a moment’s notice when Blue Ash becomes a park.

The fact is, our great airport-building days are long gone. For a variety of reasons (some legitimate, some not), we simply don’t build them anymore–especially small ones for general aviation. Indeed, it’s almost impossible to imagine an airport like Blue Ash getting built today. So when an airport closes, it’s not just the way history goes or even “creative destruction.” It’s a major loss, and another headwind for the private pilots of tomorrow.

What’s the lesson? Cherish the airports we have and let the local community know what their value is. If an airport by you is threatened, act now–challenge the short-sighted politicians. Otherwise we’ll all be attending many more airport funerals.

6000 Miles Across the Pacific in a Duchess
Scroll to top