Blog - Latest News
You are here: Home1 / Article Archive2 / I was there3 / More than an FBO 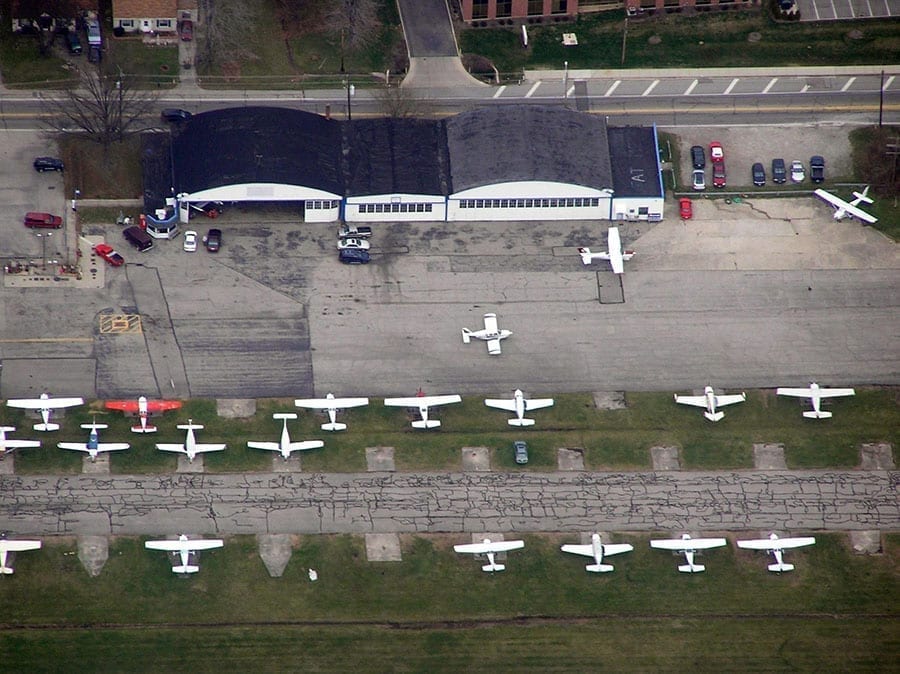 In my personal flying, and in my career in aviation insurance, I’ve visited countless FBOs, large and small. At some point I became aware that what we’ll call the “glass and chrome, potted-plant, WiFi-enabled” building had all but supplanted the mom and pop FBO; the ones that always seemed to have a three-legged dog, 30-year old courtesy car, and the smell of burnt coffee greeting visitors at the door. I have nothing against glass and chrome, and terrazzo floors, and if I were flying around in a kerosene burner while sporting epaulets, I’m sure that I would enjoy the leather recliners and cappuccino. But, my aviation heart lies with the time capsule FBOs, where the latest in information technology is a 15-year old copy of Trade-A-Plane, and the tube-fired UNICOM radio behind a Formica counter.

An FBO, but so much more.

In the year 2000, I settled in, along with my airplane, at an end-of-an-era FBO: Co-Op Aircraft Service at Cincinnati’s Blue Ash Airport. These buildings, and the surrounding crumbling concrete and asphalt, became more to me than a place to tie-down and buy avgas. The business, the airport, and the people who were drawn to it, became like a second home and family. I feel privileged to have been part of the last 12 years of its life.

Co-Op consisted of three 1930s hangars, plus a shop, office and pilot’s lounge. The furnishings and overall ambiance of the lounge was a bit like a cross between the back room of a service station and the basement of a fraternity house. The carpet was faded, the photos were faded, and the place itself was fading through a combination of age and benign neglect. I’ll leave others to chronicle the loss of Blue Ash Airport to developers, but even years before the lights were turned off in 2012, there was an understanding that the end, if not near, was certainly inevitable. Eventually, an all too familiar mixture of money and politics sealed its fate.

Although somewhat rough around the edges, Co-Op provided a tangible connection to aviation’s past. Its hangars were stuffed to the rafters with detritus, but a careful eye could spy bits of treasure interspersed: a Beech 18 door, BT-13 landing gear, cowlings from a UC-78, Staggerwing wings, all left behind from aircraft that had once been nestled inside. In the shop, or next door at Mark Day’s Blue Ash Aircraft Service, parts, some of which had been there since the 1950s, were stacked floor to ceiling. There was no need to consult a computerized inventory system; if you knew what you needed, they would find it. When you walked across the concrete hangar floor, you knew that Roscoe Turner once stood there, that instead of an MU-2, the airplane in the corner was once a Waco 10. There weren’t any layers of paint or modern lighting systems between you and the history in those hangars; it was there for all who cared to look.

The place was presided over by “Moose” Glos, resident IA and owner since 1952. In this case, the nickname was not meant to be ironic, as even in his later years, “Moose” was an imposing figure of a man. He could quote part numbers and prices from memory, seemed to know every aircraft and owner within a 50-mile radius, and was a repository for all things relating to Cincinnati aviation from the 1940s on. In his eighties, he still came to work every day. On the way to his back office, he could be counted on to throw a disparaging comment at the crowd seated in the lounge, but we knew he secretly loved to see a full house. You knew you were a bona-fide regular when he asked you for a cup of coffee, and you knew how he wanted it: black, with one packet of blue sweetener.

There’s history in those hangar rafters.

In the last days, as a sort of funereal pall surrounded the place, strangers came to pay their last respects. Old men with canes or walkers would show-up in the lounge with stories of the lessons they took, or the Aeronca Chief they based there decades before. Often they would tell us about the guy that used to run the place back then: “His name was Moose.”

“Yes sir,” we would tell them. “He’s still here, back in his office.” They would then smile in disbelief, and disappear into the back room to sit and share memories.

Aviation has a sometimes unfortunate hierarchy, its classes defined by tickets held, and equipment flown. What I witnessed at Co-Op though was something approaching true egalitarianism. The only ticket to entry was a love of airplanes. For many of us, Co-Op was more than an FBO; it was a social center. On any given weekend, the charcoal grill would be serving-up charred sausages to students, renter pilots, tradesmen, airline captains, captains of industry, and even a federal judge. CFIs, combat veterans, test pilots, or a former SR-71 driver could be seen conversing with student pilots about the subject we all had in common.

The lines between employee and customer were somewhat blurred. On any given day, it might be one of the regular customers who fueled an airplane, drove a transient pilot to a nearby hotel, or took a dad and his son, who just happened to drive by the airport and stop-in, out to the airplanes for pictures. There were no electrified fences or security badges at Co-Op. Anyone interested in what was happening at the airport needed only to walk in the door, and he would be greeted by people eager to share what we loved. Several of us had keys to the business, and when Karl, the owner’s son, would leave for the night, would be told to “just lock-up when you leave.”

Weekends would be filled with flying and shared meals. When weather permitted, my brother might lead six or eight of us in our airplanes on a flight to some distant airport restaurant. Thanksgiving turkeys were deep-fried on the ramp, and when circumstances dictated, Christmas night might find a couple of us celebrating the holiday in the humble surroundings of the Co-Op lounge.

We often live our lives in retrospect, only later truly appreciating the people and joys for what they were: extraordinary and fleeting. I’m happy to say that my countless hours spent with airplanes and friends at Co-Op are the exception to this rule. I knew then that a place like this could not last; a place that brought the sometimes undefinable allure of aviation into crisp focus for me. Changing times and “progress,” if you like, had marked it for destruction long before the wrecking ball came. I’m guessing that this species of FBO still has some survivors at small airports. The day that every large city had one or two though, is sadly over.