Blog - Latest News
You are here: Home1 / Article Archive2 / I was there3 / Full circle: two brothers and the joy of flying

In the summer of 1973, we lied to our mother. We told Mom that we were on our way to a local park to toss a baseball. Our gloves were conspicuously displayed as we exited our house and walked to my brother’s car. In retrospect, I think it possible that she knew we had no intention of doing anything with that baseball, but with the application of a little suspension of disbelief, she could convince herself that two of her three boys were not soon to be strapped into a dangerous, small airplane together.

We are all aviation people, but have arrived at that designation by varying paths. I’m sure that many of us can point to the influence of one particular person in that regard. In my case, it would certainly be my brother Scott. In 1973, Scott was 18 and I was an 11-year-old, totally smitten with anything related to airplanes. We had that in common. In an effort to be as much like my brother as our age difference would allow, I latched onto his interest in all things aviation. 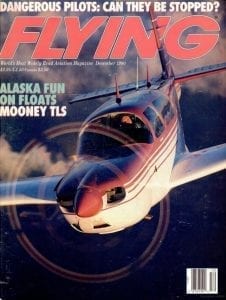 Reading flying magazines instead of math homework: the life of a young aviator.

An astonishingly large part of my childhood was spent reading stacks of his aviation books and magazines, as well as watching him build aircraft models. On any given evening, when I should have been doing homework, I was likely to be found hanging out in Scott’s room while he quizzed me on something I had just read about the different models of the P-47, or something similarly arcane. At one point in my young life, when I should have been working on my multiplication tables, I could name a dozen or more pilots from the 56th or 4th Fighter Groups, and identify every major Allied combat aircraft of WWII.

When he turned 16 and had access to a set of car keys, we would be off to the local airport on almost every Saturday to watch takeoffs and landings while listening to a little transistor aircraft radio. Three or four times a year, the Saturday trip would be to the Air Force Museum in Dayton, Ohio, where the history in which we reveled would become a tangible thing.

But in 1973, Scott had taken the next step, the big one, by signing up for flight training. His flight instructor, freshly back from flying missions and being shot at in Southeast Asia, was cool and calm while trying to teach him how to fly one of the flight school’s brand new Cherokees. A kid as ballast in the back seat was OK with both my brother and the CFI, as long as I kept quiet and didn’t get airsick. I was able to meet the requirements and was presented with my own logbook for these flights. Before long, I had added expired sectionals, an E6B, and the latest Piper sales brochures to my growing collection of things to keep me occupied when I should have been doing schoolwork.

I was Scott’s first passenger immediately after earning his ticket, and he was mine a few years later when I did the same. Over the years, we lived in different cities, but both of us continued our flying as time and finances would allow. Whenever I had a harrowing flying experience, reached a milestone of some sort, or just saw a cool or unusual airplane in my travels, Scott was the one I wanted to share it with. Long before the “miracle” of electronic communications, we would drop each other a letter from time to time with a photo, note, or newspaper clipping… always related to aviation.

I was the first one to buy an airplane, a rough-around-the-edges, straight tail 150 with a sick engine (N7856E). My A&P partner and I came up with the princely sum of $5500 to buy her. He worked his magic on the engine, and we both flew her for a couple of years until I purchased his interest. In 1992 I decided that owning an aircraft made absolutely no fiscal sense, and sold the now recently painted 150 to Scott. It took a while before I considered it “his” airplane, but that started to change when I reconsidered my position on the sanity of aircraft ownership, and bought another 150. Thus began what I now consider to be the culmination of my days as an aviator.

First, while living in different cities, and eventually based at the same airport, we spent many of our weekends flying together. Often in formation, we would be headed to lunch at an airport restaurant, off to a fly-in, or doing it without a destination but solely for the love of it. We even enjoyed some modest fame. Once, while landing closely together on a return trip to an all but deserted country strip, a woman from the FBO ran out to the ramp and summoned her husband with shouts of, “It’s them two brothers again!”

From my early thirties into my fifties, chances were good that a nice weekend would find the two of us together at the airport. I bought and sold aircraft a few times, but Scott held onto that straight tail; through engine overhauls, engine failures, and 2500 hours logged. It had long ago ceased being my airplane, and became very much a part of who Scott was.

In 2019, after having sold my 172, I had once again decided that I needed an airplane, and had located one that interested me about a three hour drive away. It was a crummy IFR day, and Scott volunteered to drive me to inspect, and likely purchase the latest airplane of my dreams. So, with cashier’s check in hand, I got into his passenger seat early on a Saturday morning. Within 20 minutes of our destination, I knew something was suddenly and horribly wrong with Scott. After having him pull over, we were fortunate to have a life squad nearby to respond to my 911 call. His life had changed forever on that desolate stretch of Indiana roadway. 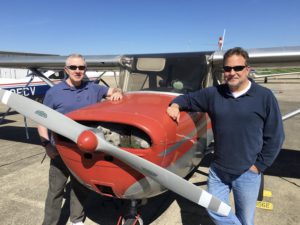 Sometimes a short flight in a simple airplane is the most important mission.

A stroke is a silent thief. I have watched my brother, with truly inspiring effort and the help of many devoted therapists, try to regain what had been taken from him on that day. Early in his recovery, when it was important to differentiate between cognition and speech, my wife and I put together a photo-based test. I printed shots of 10 famous aviators, a few of whom would be a little obscure to a layman. I also printed pictures of 10 aircraft, with the idea of matching the aviators to the aircraft with which they were most strongly associated. I scrambled them on a table-top and asked him to match them.

Within just a few seconds, Don Blakeslee was placed on top of the P-51, Jack Broughton with an F-105, Tony LeVier with his race-ready P-38… and so on. He looked at me like a PhD candidate might if asked to put the round peg into the round hole. The knowledge was clearly still there, even if the words were difficult for him to find. There have been many successes along the way, but the freedom to strap in and take off by himself, in that machine that has so defined him, will never be regained.

I flew 56E once or twice for him, but I found myself avoiding our airport for a long while. Happily, after many months of his single-minded hard work and tenacity, he reached the point where a flight in his airplane was again possible. I got both myself and his airplane current, and as this is written, we are again making Saturday trips to the airport. We’ve switched seats, but he still knows and feels that airplane better than anyone ever will. Occasionally, he makes that point clear to me when I’m handling her differently than he would like!

I feel sorry for pilots who know and appreciate only the practical side of aviation. Yes, they can be useful machines when getting from A to B, and some of us use our association with them to put food on the family table. That’s all well and good, but I’m here to testify that practicality pales when compared to the chirp-chirp of tires on asphalt and the smiles on the faces of a couple of graying old guys inside that little straight tail. Thanks to my brother for the journey, and for helping put it all into the proper perspective. An astronaut, an AirCam, and some kids
Scroll to top