Blog - Latest News
You are here: Home1 / Article Archive2 / I was there3 / An astronaut, an AirCam, and some kids

It was a Saturday morning and former NASA astronaut Story Musgrave was leaning over drilling holes in his AirCam kit being built with my high school aviation class students. We connected with Story when he was a speaker at one of our EAA Chapter 1240 fundraising dinners supporting our youth aviation efforts.

After Story found out more about our high school aviation program, he was interested in building an AirCam. It was a natural step to have him build it with our students. Living in nearby Kissimmee, Florida, Sebring was not too far to come and work with our students when he wasn’t traveling around the globe continuing his many varied interests. 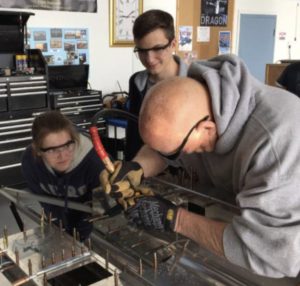 Just an astronaut working on an AirCam.

In my years in aviation, like many of us have experienced, you meet all sorts of interesting people, some famous, others not. A common denominator is their passion for aviation. Story is one of the most unique individuals I have ever met and I have the privilege of calling him a friend. He is the one who led the team to repair the Hubble telescope and has flown in every NASA Space Shuttle. A man who never finished high school, he went into the military, completed his GED, and went on to be a brain surgeon. He holds advanced degrees in engineering and is an accomplished artist, not to mention a NASA astronaut.

So, here we are working on the front part of the AirCam fuselage. I like to bust Story’s chops one in a while, and I told him if that what he was doing couldn’t be more complicated that fixing the Hubble.

It took some time to get it all done, but our students finished the build. The journey was amazing, especially watching the interaction between Story and the students. We all became very close and felt a sense of purpose and excitement as we all realized this build project was something special. Our high school program has worked on other aircraft projects before Story’s AirCam and we are in the process of building another AirCam with an EAA Chapter 1240 member and a Zenith 750 STOL kit, but Story’s build was special. 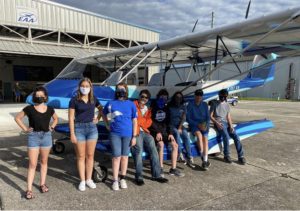 Working together to complete a project fosters a real sense of teamwork.

Our students worked with a man who is the prime example of not letting life’s challenges prevent you from literally reaching for the stars. There are many ways for us in the aviation community to reach out and help the next generation experience what we know as the magic of flight. High school programs are becoming more common as AOPA and EAA have developed programs and curriculums to be integrated into schools and youth programs. It can be as simple as offering a ride in your plane to that kid at the airport who is hanging around wide-eyed watching planes come and go.

Recently, I was flying EAA Young Eagles at one of our pancake breakfasts. My next Young Eagle passenger was a high school USAF JROTC student. He knew all the types of aircraft, performance, and everything thing else about aviation—he was a non-stop chatterbox of enthusiasm. The ongoing dialog continued on the taxi out to the run-up area and during the run-up. After the takeoff roll and while climbing to 2,500 feet, there was dead silence. I knew the headsets were working and I wondered if he was scared or about to blow his breakfast all over the panel. I was considering how fast I could get back on the ground.

I asked him if he was alright. He turned away from the window with the biggest grin I have ever seen and said, “This is the best day of my life!” It doesn’t get much better than that. I could have stayed up there with him all morning, but there were others to fly.

Yes, there will be others to fly, and what can you do to help that happen? There is a kid out there waiting.

Full circle: two brothers and the joy of flying

One in a million: a chance aerial encounter in Laos
Scroll to top