Blog - Latest News
You are here: Home1 / Article Archive2 / I was there3 / The vanishing airplane – in the pattern with me 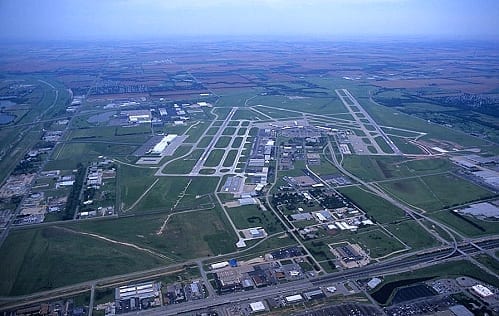 This episode – which to me was and still is mysterious – happened many years ago when Wichita’s municipal airport was fairly new and not too heavily used. My memory of it was of a very nice, high visibility day and I was flying in, complacently, from northwest of the airport (I don’t remember anything about the flight prior to this). There were two other voices heard over the radio throughout the event: the tower operator, calm, collected and business like, and that of a female pilot, chipper, level toned and following protocol, also apparently approaching the field from the northwest.

I’m on downwind for the airport… but which airport?

Myself and the other pilot – who also stated she was flying a Cessna as I was – both called the tower with our intentions of making a full-stop landing, and I’m not sure which of us called in first. The tower said he had me in sight, but did not have the other Cessna in sight. My attitude changed from complacent to alert.

I looked around for the other airplane, but did not see it. I checked to make sure I was at pattern altitude, and it was right on. As I got to the point of about turning downwind, the other pilot called and said she was turning downwind. The tower responded that he did not have her in sight. My attitude changed from alert to concerned, as I really hate mid-air collisions.

I of course continued to search for any sight of her airplane in any direction and couldn’t find it.

I thought maybe I should make a right turn out of the pattern and start the approach all over – but then I thought I might be turning into her path of flight so just continued downwind. I think, but am not sure, that the lady at some point said she was turning base – I was more concerned with being prepared to take evasive action wherever it was needed.

As I got to the point of needing to turn base myself, and I’m sure my voice reflected my trepidation, I said I was turning base and the tower said, matter-of-factly, cleared to land. I was still uncertain if I was the only one about to land, even after I turned on final and could see very well there was no other airplane on approach or on the runway in front of me. But, still, I worried there might have been one behind me.

I landed and was directed off the active and to contact ground control. But I turned the airplane a little so I could get a look at the approach and landing area behind me, and there was no airplane on the runway or on final. So, relieved but confused, I contacted ground control and proceeded to taxi. I was no longer able to hear tower communications, so I don’t know if there were other transmissions with the lady in the airplane that vanished. Where did she go?

The episode left me with some questions: where was that other airplane, at another airport? How did the tower know the airplane he had in sight was mine and not hers? And why did he not respond to her after the second notice that he did not have her in sight? What did he know, or suspect, that I didn’t?

What do they see, and when?

Understand that this article is not intended as a put down of female pilots, as there were and are many good ones and she might well have been one of them. Her calls to the tower were cheery, all in appropriate order and with proper terminology – maybe just to the wrong tower. (You will understand this even more when you read the last paragraph, below.) But, more likely, this is a put down of tower operators who don’t tell you enough to reduce your anxiety. After all, the other pilot kept reporting in right where I was in the pattern. So, I don’t know when during the encounter her airplane vanished, into Wichita’s 1350 foot altitude not so thin air – maybe before it started.

Some time after the above mix up, I was approaching the same airport – Wichita’s municipal one, on the west side of town – from the same general Western direction, except it was at night. As I tuned into the tower frequency I was entertained with a lengthy discourse between the tower and this time a male pilot who insisted he was at that airport and intending to land, and a somewhat perplexed tower operator who could not locate that guy’s airplane anywhere in the vicinity.

I decided to sit this one out, and – without calling in – established a personal holding pattern a little away from the airport on the west. The conversation continued with even a couple of abandoned approaches intervening and the vagrant airplane on another try at a final, when the tower operator suddenly said, “Look on your right, is there a line of B-47’s parked there?”

Tower: “You’re at McConnell Air Force Base”, which some may know is on the other, eastern, side of the city.

I decided to go ahead and make my landing while the other guy flew across town. Every pilot can confuse one airport for another. And this tower operator straightened things out instead of leaving them be. Of course, this time I stayed out of it – and experienced no anxiety.

Friday Photo: sunrise from an AWACS
Scroll to top