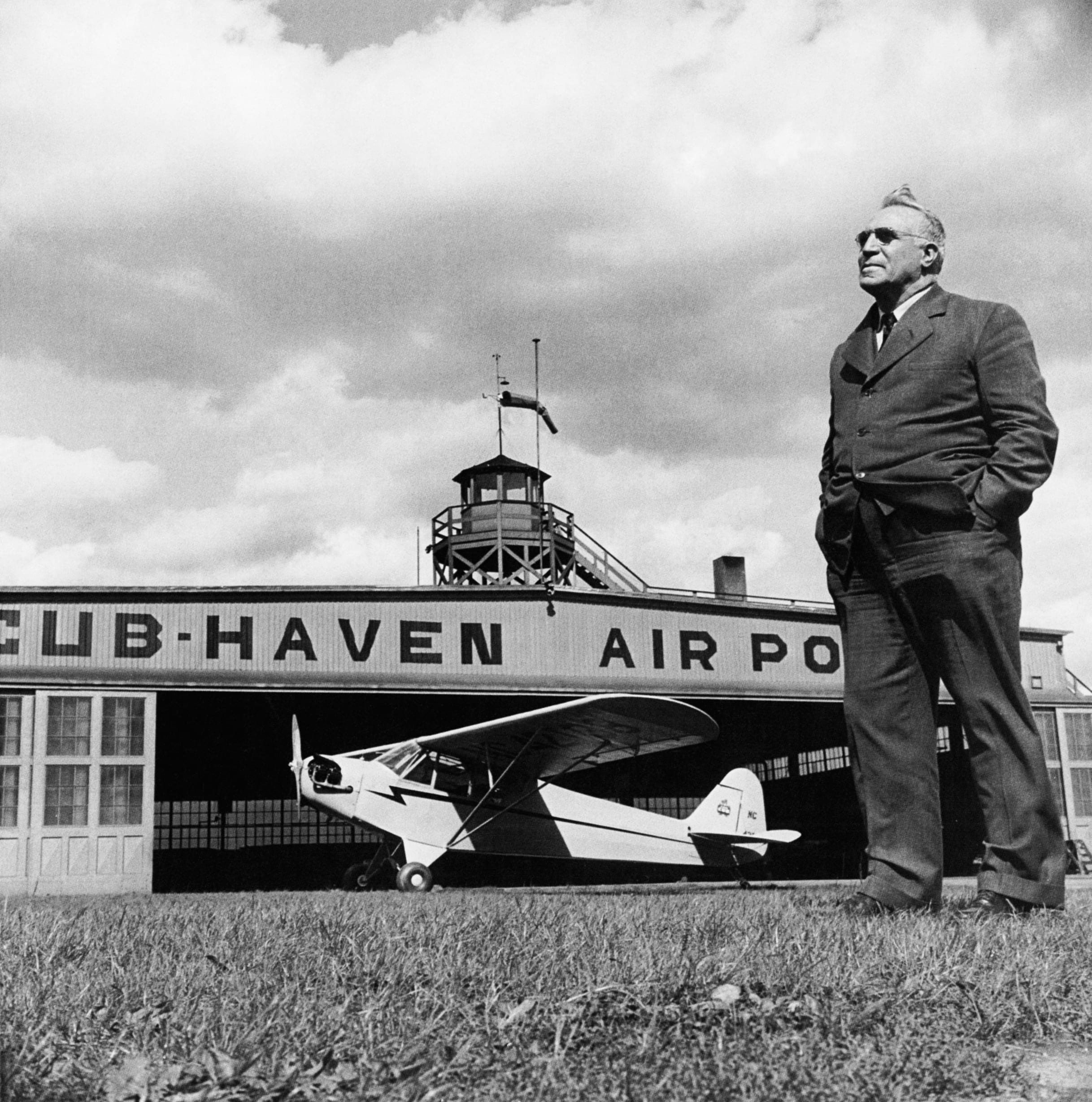 Piper Aircraft Corporation was formed in 1937 by W. T.  Piper, Sr. Over its 75 years there have been many ups and downs and changes. A brief history is available on Wikipedia. Here I would like to offer some anecdotes about how I related to the company over the years.

I am a little older than Piper but the company came into my life when I was but three and before Piper was actually founded. When its predecessor, Taylor Brothers Aircraft Company went bust in The Great Depression, W. T. Piper bought the assets, which included the E-2 Cub but he didn’t put his name on the building until 1937. The E-2 evolved into the J-2 in 1936.

In August, 1936, my father, Leighton Collins, went to the home of Taylor, Bradford, Pennsylvania, and bought a new J-2 Taylor Cub. It was powered by a deep-breathing 37 horsepower engine and didn’t fly fast. In fact, on August 17 and 18 it took him 19 hours and 55 minutes to travel from Bradford to his base at Fordyce, Arkansas, in NC16779. Things were so tough in the airplane business that Taylor hadn’t been able to pay their compass bill and navigation was with a pocket compass.

My father had worked at selling airplanes for a while, dealing in Aeronca C-3s and Monocoupes. When he bought that Cub he was working in the insurance business and teaching flying and selling Cubs on the side. He also took his sons flying in the Cub and I did love for him to do loop-de-loops, as I called them, in the Cub.

Piper moved to Lock Haven, Pennsylvania, after the Bradford factory burned and it was there that I first came in direct contact with Piper. My father took me with him for a visit before WW-II started and I well remember how friendly Mr. Piper (as everyone called him) was to a toe-headed six or seven year old boy. He took us on tour of the factory which was in a converted silk mill.

By 1940, my father had upgraded to a J-5 Cub Cruiser. It had three seats, two in back and one in front, and a mighty 75 horsepower engine.

After the war the airplane building business was good for a brief time and then it went really bust. By this time Mr. Piper’s three sons were in business with him and for a brief period the family lost control of the company.

Back they came, though, and the Pipers made a fine team.  Mr. Piper was the boss, Howard “Pug” Piper was the man for new product development, Tony Piper oversaw production and Bill Piper, Jr., managed the money.

Mr. Piper was a proud man when he steered Piper back to profitability and it was listed on the New Your Stock Exchange, call sign PPA.

It was a busy time, too. Pug Piper had a fertile imagination and oversaw the development of many new airplanes. The Apache (originally called the Twin Stinson) was Piper’s first twin and the Comanche its first high-performance single.

Piper had a loyal and dedicated network of distributors with big territories. They sold to dealers who had smaller territories. I recall Mr. Piper worrying over the financial implications of that first twin. He was concerned that the Apache’s $32,000 price tag would be a bit much for some of his sales outlets.

The Apache evolved into the more powerful Aztec twin and, less than a month after Aztec deliveries commenced, Piper made the third one off the line available to me for a trip. My friend Bill Heritage and I flew that airplane, Aztec N4503P, from Philadelphia to Bermuda (in 5 hours and 10 minutes). The return was to Boston because the track there was to the north and there was a strong west wind. Trivia: the closest land in the U. S. to Bermuda is Nantucket so our miles over water were slightly less on the trip back.

At one point Pug Piper decided they needed an airplane that would move quickly and nonstop between Lock Haven and their new plant at Vero Beach, Florida. Thus was born the 400 Comanche with an eight-cylinder 400 horsepower Lycoming. That’s a long way from the 37 in my father’s first Cub.

I once asked Mr. Piper if he was going to discontinue the manufacture of an airplane. He said, “Richard, I don’t discontinue airplanes, our customers do.” After a run of but 148 they did just that to the 400 Comanche. Pug guessed right most of the time but not all the time.

The Cherokee was developed to replace the old fabric covered Pacer/Tri-Pacer series. One key design element was the cost of construction and the Cherokee was a breakthrough on this. It had half the parts count of a Comanche.

Pug was showing me the prototype Cherokee and when he got to the part about draining the sumps, he uttered a grunt of disappointment when the gas ran onto the main gear tire. (It still does, 52 years later, if you are not one of the politically-correct pilots who collect the gas as it drains.)

Piper looked outside the company for some product development. Ed Swearingen built the prototype Twin Comanche as well as the prototype turbine-powered Navajo which evolved into the Cheyenne.

My father and I had a Comanche to fly in our magazine (Air Facts) business. Piper had a rather lavish distributors’ meeting every fall and I was in Vero Beach, in our Comanche, on the way to the meeting at West End in the Bahamas. I was running late and as I was preparing to leave, Mr. Piper walked over and told me that his ride went off and left him and asked if he could hitch with me.

So we headed from Vero to Palm Beach, to rent flotation stuff for the 90 miles of water between Florida and West End. I went into the FBO where I was told that they had rented everything they had so nothing was available.

I repeated this to Mr. Piper. He shrugged and said, “Richard, can’t you swim?” Off across the water we went. As an aside, Mr. Piper had been on the swim team at Harvard.

All the aircraft manufacturers were pretty casual about checkouts through the 1970s. There was no type-specific training and I got pretty good at checking myself out in airplanes.

The Comanche 400 was a bit of a challenge but, like all airplanes, if you studied it a bit you could anticipate how it would fly. I knew that it would be a bear with the engine throttled back and it was. That big prop hooked to that big engine created a lot of drag and it was obvious that with no power the aiming point would not be far ahead.

The same company that made the two-seat Cub went on to produce the twin turboprop Cheyenne.

I learned a lesson about flying unfamiliar airplanes one day at Lock Haven. The Reading (Pennsylvania) Air Show was in progress and for some reason I was in Lock Haven with no ride back to Reading. Someone said that was great, the Navajo needed to go to Reading and I could take it.

It turned out to be a Pressurized Navajo that was loaded with promotional material. I asked about the load and was assured that everything was within limits.

Someone from Piper was riding along and as we were trundling down the runway (3,000 or so feet long), I thought the airplane felt sluggish. So I asked the Piper person if he thought the acceleration was normal. He responded that he wouldn’t know because hadn’t been in a Pressurized Navajo before. As the end of the runway loomed, I rotated the airplane and it flew away, not smartly but adequately. We probably cleared the trees by 50 feet.

The first chapter in the history of Piper started coming to a close in 1969. Boat builder Chris-Craft started acquiring shares with the eventual goal of taking control of Piper. For whatever reason, the Piper family had an intense dislike for the Chris-Craft people. Piper didn’t have the resources to fend off a hostile takeover so they started looking for someone they liked to help in the battle with Chris-Craft.

The savior, at least in part, turned out to be a conglomerate, Bangor Punta. They acquired about half the stock, Chris-Craft had the other half, and the two companies took control in August of 1969. The legal battles related to the takeover raged for years. Bangor Punta eventually won.

The Piper family knew that their days were numbered and started leaving. Mr. Piper still worked every day until he fell ill in November, 1969. He died on the 15th of January, 1970. My father and I flew together to Lock Haven for the funeral, to say good-bye to the wonderful man who had such a profound effect on our aeronautical being and to pay our respects to his fine family.

To give a product-related reference, the turboprop Cheyenne had been in development and first flew as the Piper family was on its way out the door.

After the Piper family left, I had good relationships with subsequent management and flew and evaluated the many airplanes that were developed. I was treated like family both by the Pipers and the good folks who came along later. So for me it is rather like wishing a favorite uncle a Happy 75th Birthday.

Land of the midnight sun

Tracking the conception, birth and life of the 172
21 replies

Tracking the conception, birth and life of the 172

Go or No Go: a tough flight home
Scroll to top