On June 10, 1933, two Spanish officers departed Tablada Aerodrome in Seville, Spain. Captain Mariano Baberan’s and Lieutenant Joaquin Collar Serra’s goal was to fly nonstop from Spain to Cuba. Their aircraft was a Breguet XIX, a French-designed biplane of which 20 were imported by Spain and who under license by CASA produced 177 for its armed forces. The aircraft was well chosen: it had a reputation as a reliable and proven aircraft, having begun life as a French bomber and reconnaissance aircraft.

Following Lindbergh’s historic flight in 1927, many European countries attempted the dangerous trans-Atlantic flight. Some were successful, but most were not. North Atlantic and South Atlantic crossings in 1927 were: 37 attempts, 12 successes, 8 disappearances with the loss of 20 pilots, and 17 flights turned around (a 32% success rate).

In 1927 a Breguet XIX GR (Grand Raid) named Jesus del Gran Poder (Jesus of great power) would travel from Seville to Brazil nonstop, then to Buenos Aires, Argentina; Santiago, Chile; Lima, Peru; Panama, Guatemala, and Cuba. It would then return by boat to Spain, where it is now preserved at the Museo de Aeronáutica y Astronáutica in Madrid. 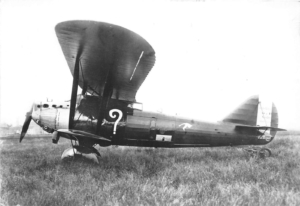 By the late 1920s, the Breguet XIX had become the choice for record-setting flights.

In 1930 a Breguet XIX GR named Point d’interrogation was the first aircraft to fly from Paris to New York, in 37 hours and 18 minutes.

The biplane Baberan and Serra would be flying, the Cuatro Vientos (or Four Winds), had a wingspan of 48 ft. and a length of 41 ft. Up front was was Hispano-Suiza 12-cylinder, 650 hp, water-cooled engine driving a fixed pitch, two blade wooden propeller. Additional fuel tanks were added, including a “super barrel” main tank located just behind the firewall, which could hold 14,605 gallons. Additionally, seven fuel tanks were added to the top wing, increasing the fuel capacity by an additional 5300 gallons. This gave the Four Winds an estimated range of 4,630 nm. Oil capacity was a staggering 65 gallons. This meant the aircraft’s weight was dangerously increased, from an empty weight of 4200 pounds to a takeoff weight of 19,000 pounds. The aircraft had a max speed of 118kts and an estimated cruise speed of 102 kts.

In January 1933, a long-distance flight test was conducted. The Four Winds departed Madrid for one of Spain’s African colonies, Cape Juby. From there it was off to the Canary Islands and back to Madrid. During the test flight, night flying was undertaken to provide experience for the crew and to ensure that the aircraft and equipment onboard were operational. It was deemed a successful flight with no problems.

Weather information from Cuba was inconsistent at best, and definitely slow to be collected and distributed. Details of the weather were based on the observer’s casual interpretation of what they saw. Preliminary weather reports were requested by letter to a priest, who responded with a letter saying it was a fine day or raining off the coast. The delay in communication was not much help. Prior to departure, telegrams were sent to at least provide some more resent observations. On May 26, radio reports were being received, which did provide more current and accurate information.

Baberan and Serra were given a personal clearance from the King of Spain to depart. On May 28, Modesto Madriaga, the mechanic for the Four Winds, departed by steam ship with two boxes of spare parts, tools, and dress uniforms for the pilots. He would be waiting in Cuba for the arrival of the aircraft.

Lieutenant Serra was the pilot and occupied the front seat. The rear seat was occupied by Captain Baberan, who would function as navigator for the flight. Other that a second set of flight instruments, the rear seat contained a folding table for in-flight navigation calculations. He had at his disposal: a new type of rotating slide rule for navigation computations (no relation to an E6B or CR-2 type flight computer), two sextants, three clocks, and a light. Drift and crosswind components were calculated by dropping smoke devices on the ocean and observing the wind conditions. No radio was listed on the manifest. Flares were also available for illumination in case of a forced landing at night, which was a common procedure at that time.

For the crew there was a menu of ham, bananas, mineral water, and a bottle of cognac (to keep warm at higher altitudes, one would presume). A rubber inflatable life raft, along with a bicycle pump for inflation, was also on board in case ditching was necessary.

On June 11, at 4:30am, the overweight biplane departed Seville. After two bounces and a short flight in ground affect, Four Winds lifted off the runway and headed for the first check point, Gibraltar. 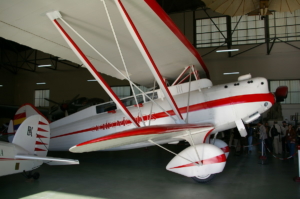 The next landfall was the mountains of the island of Madeira Island, near the Azores. From there, it was dead reckoning to Guantanamo Bay, Cuba, which was a Pan Am base at that time. Unfortunately, the runway was unusable as the cows on the runway prevented any landing. Undaunted, they proceed to the next available airfield Havana. However, thunderstorms forced them to return to the airport at Camaguey. A wise decision, as after 39 hours and 42 minutes of flying, with 7240 km of it overwater, only 26 gallons remained—about 43 minutess of flight time.

The party was on, and a chain of events began.

News of their arrival caused great excitement, and after refueling and servicing the aircraft they were escorted the next day to Havana by a flight of five biplanes from the Cuban Air Force. On landing at the Havana airdrome, the two Spanish aviators were greeted by a crowd of 10,000 well-wishers.

They were wined and dined, as everyone wanted to honor their achievement—perhaps too much so. They attended numerous events and dinners, and were awarded a cash prize for the flight, which they donated to a local charity for expatriates who wished to leave Cuba and return to Spain. When news of their flight reached the US, the mayor of Chicago invited the aviators to attend the World’s Fair.

Their next flight was to proceed to Mexico City. The plan was to follow a Pan Am route from Cuba to Merida, Mexico (on the Yucatan Peninsula), following the coast to Veracruz and then on to Mexico City. The route was well marked with airway markers from Pan Am employing flags for signaling and frequently traveled by other commercial air carriers. On June 19, the aircraft was fueled and pronounced ready for flight by the mechanic. Flight time to their destination was estimated to be 12 hrs at a planned altitude of 4800 to 5400 ft.

The events honoring them continued nonstop and continued right up through the night before departure. This may have taken a toll of the two pioneering aviators. Both were tired not only from their record-breaking flight, but also exhausted by attending the numerous events held in their honor for days. Captain Baberan had undergone surgery to have a cyst removed from his arm, which caused him some fever. He was reported to be sleeping in a car until boarding the aircraft just prior to departure at 4:45 am.

Madriaga, the mechanic, departed on a commercial flight to Mexico. The Four Wind’s takeoff was “in a driving rain” as later reported by the mechanic. Rain was also reported on the Yucatan Peninsula. The next contact with the Spanish biplane was at 11:35, by a Ford Trimotor operated by Mexicana De Aviacion. The Trimotor reported them flying west along the coast, following the Pan Am route. The airway markers employed colored red flags an indication to turn back. At Tejeria they would have been given a red flag as thunderstorms were developing between Villahermosa and Mexico City, but bad weather may have prevented them from observing the warning, or they may have chosen to ignore the flag on the airway marker.

Two squadrons from the Mexican Air Force that departed Mexico City to meet and escort them to Mexico City turned back, reporting thunderstorms in the mountains. The crowd of 30,000 gathered to welcome them were saddened as their estimated time of arrival came and went without the airplane appearing. The following day, the Mexican Air Force launched a massive search. Calls went out for anyone having knowledge of the Four Winds to contact the authorities at once. Sadly, they received no response and the air search provided no sign of the Spanish aviators. 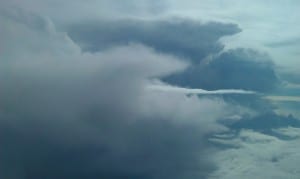 An overweight biplane is no match for a thunderstorm.

A reward was offered for any information, but only produced hundreds of useless reports. One report said they had crashed in the jungle and were killed by the locals, with the aircraft burned and buried in a cave. A more likely story, from a lighthouse keeper, said he observed flares out in the ocean. Unfortunately, no trace of the aircraft was ever found. A suspected piece of debris, a tire casing, was found washed ashore, however the manufacturer could not confirm if it belonged to the aircraft.

The chain of events began when they landed in Havana. Tired from their long flight and the numerous celebrations honoring them, combined with severe weather, flying on instruments in a tropical environment, and being unfamiliar with the terrain, probably spelled disaster. They may have crashed into the side of a mountain, or to avoid storms they may have diverted out to sea. Loss of control from turbulence in an overloaded airplane was certainly a contributing cause. There was an airdrome at Villahermosa they passed over earlier—they could have turned back and waited out the weather there.

A desire to press on may have been influenced by the large waiting crowd and the invitation to attend the World’s Fair. If that was the case, it robbed them from the honor they deserved and a place in history. The chain of events in this tragedy, like today’s investigations of aircraft accidents, sounds all too familiar.

Engine failure: how to predict it and how to react

An accident waiting to happen?
Scroll to top