There are some predictions I wish hadn’t come true. This is one of them.

I didn’t know the guy personally, but I vicariously knew his airplane. It was an A36 Bonanza, and the way I got to know it was that any day I happened to look at what was going on at Downtown Island Airport in Knoxville, it seemed this particular plane had taken off, headed for Middlesboro, Kentucky. It was a short flight, usually between 15 and 20 minutes.

It made me wonder why he bothered flying it, unless he just wanted to fly. It didn’t really make a lot of sense from a time standpoint. Sure, it was only 20 minutes up there, but before getting in the air, he had a 30 minute drive to the airport, followed (one would hope) by a thorough pre-flight and run-up. It would have been close to an hour just to get in the air. And then after he got to Middlesboro, he still had to get from the airport to his final destination. Time wise it made no sense, but if he wanted to fly for the fun of it, it was an excellent excuse. Most mornings. 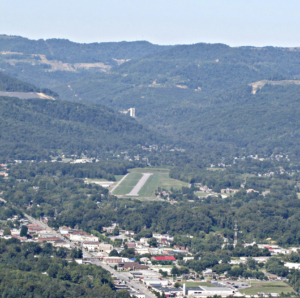 The airport in Middlesboro is not a great bad weather airport.

What caught my eye in looking at his trips was that some of them were made on not good mornings, when the weather was so low that no one in their right mind would have flown in those conditions into that location. The airport is in a valley, with a 1500-foot pile of dirt just to the south. Other rising terrain dots the entire area. It’s a challenging place to fly in good conditions. It’s Russian roulette when the weather is bad, which, judging from his diversions to alternate fields, was not uncommon.

Several times when ceilings were low in Knoxville and the surrounding area, he would be in the clouds headed for work. There was an RNAV approach, but with an MDA of over 1600 feet AGL, it wasn’t much of one. While it’s just a suspicion, it’s probably a valid one based on what the weather was 40 miles away, I think he fudged or ignored that MDA on a somewhat regular basis. If the weather was really down, there was another airport not far away, but with similar terrain and an approach with a similar MDA. Sometimes he would divert to that and make it in. On the day in question, it was that alternate airport he was trying to land at.

But the question is, when you’re not saving much—if any—time to fly, and when the weather is so bad that you know you’re putting your life in jeopardy, why do you leave the ground?

As of November 3, 2022, that question will never be answered. Weather was severe clear in Knoxville, but evidently it wasn’t at Middlesboro, because it appears from the track that he went straight to the alternate, Baxter.

There were several turns recorded by flight tracking, and then the final one that seems to show him on the approach, stopping about a quarter of a mile from the end of the runway. Was he still IFR when he hit the ground? I’m sure the final report will tell us (here’s the preliminary report). 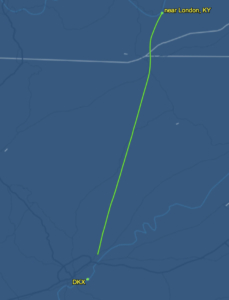 A short flight, with a predictable ending.

A few months ago, my son was with me on an afternoon flight in the general direction of Middlesboro, and I was telling him about this guy, and remember making the statement, “One of these days, you’re going to see a story about him on the front page of the paper.” Well, it didn’t make the front page, but I did get an alert from a local TV station about a plane crash in Baxter. Not being that familiar with Kentucky geography, I turned to Google Maps. Sure enough, it was the airport he had used as his secondary. Details were sketchy, but the story did say it was a Beechcraft with one person on board. That was another piece of the puzzle. I then went to Flightaware. Had he left that morning? Yes, and timing was about right. It showed result unknown on the flight. Another piece. Then I turned to FlightRadar24, with gives more track detail, and there it was. The next morning, the name was confirmed.

Why do people do things like this? This guy was a doctor. Not to be unkind to doctors, but I recalled an incident in Texas a few years ago when a doctor in an A36 had flown through Lubbock from Amarillo to pick up his daughter to then go to the Dallas area to eat and then fly back. Just a joy ride. Nothing urgent. He left Lubbock on the return at about 10pm, with conditions in Amarillo at zero/zero. He didn’t have an instrument rating, but that didn’t keep him from filing an IFR flight plan. Predictably, the wreckage was found the next morning. His wife and son were also his victims.

The laws of physics are not flexible. If an airplane hits the ground out of control, the results are rarely good. If you cheat fate often enough, fate will win eventually. There are mistakes, and there are stupid mistakes, and thinking that somehow the rules that apply to others don’t apply to you, and that somehow you are immune from disaster, is a stupid mistake that has cost too many pilots their lives.

If you know a pilot like this guy, sit him or her down and have a talk. They may not listen, but at least when you read the story in the paper about the crash, you’ll feel better that you tried.

The Four Winds: Spain’s record-setting flight to Cuba in 1933

Wings Over Dallas airshow tragedy: an eyewitness account from a pilot
Scroll to top