It was Tuesday afternoon at Geneva airport, and I was flying to Milano for work with the DA42. I was super happy that I did not have to wait in line as the “simpletons” flying commercial do (sorry, not sorry), or get a later slot as is very often the case at GVA. I took off towards the south on runway 22. 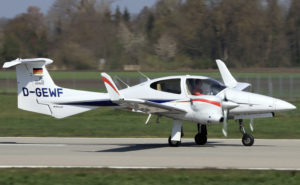 The Austro engine does require a bit more care sometimes.

Everything looked good: positive rate of climb, gear up, and I pulled back power to 92% as I have done many times before, getting ready to relax and prepare for the Alpine crossing. Today my head was in the levels, trying to figure out when to switch on the deicing system and whether I would need oxygen, all pretty typical for a trans-Alpine winter flight in Europe but all still quite demanding for me.

And then something seemed weird. It took me a second to see it: one engine would not go down in RPM, still well in the “yellow,” although the throttle was now well below the usual power setting.

I realized something was wrong and continued to reduce power per the emergency checklist, as one should not be overturning an engine for more than 10 seconds with the magnificent Austro diesel engines. Otherwise, a not-so magnificent grounding and a profound technical check will be required.

Finally, I managed to get it back into a safe RPM range—the engine was now at less than 50% power, more like 30%. I started mentally preparing myself for the engine to shut off completely. My foot was already heavily and automatically pressing the opposite rudder, as I was trained to do. All this must have taken less than a minute, with the ground and airport still in sight behind me, but the winter clouds and ice were getting closer with every second.

Remembering that this could be a governor/engine control unit (ECU) issue, I tried playing with the power level, toggling it up and back down once or twice. Then I said to myself: Guy, what the hell are you doing? Just go back to the airport, land, and check whatever the issue is on the ground; you do not want to get in the clouds and cross the Alps in ice with one engine. My crossing that day would have been at around FL140-160 – well above what the DA42 could handle with one engine, not to mention the massive mountains close below and a LOT of potential ice.

“Geneva Tower, I have to go back,” I heard myself say.

“Who is calling?” they asked, as I had forgotten my call sign from the gravity of the situation.

“DGEWF here; I have an issue with one engine, need to land immediately, turning back to the field.” Without really waiting for an answer, and with the clouds looming closer, I started my turn towards the healthy engine.

And then I heard it for the first time in my flying career: “Swiss 123, go around, break break, all traffic, keep positions, emergency in progress, break break, DGEWF cleared to land ANY runway.”

Not the intended flight path.

Two minutes later, I was on the ground for the shortest flight to have ever left Geneva at under 6 minutes, managing to keep my engine out of the red and escorted by an entire fire brigade (see video below.

After reaching the parking position, I turned off the engines and just laid on the ground for a minute. I was happy that I came back to check whatever needed to be reviewed, but to do it on the ground and not in the air. The friendly fireman (one of many friendly faces and voices that evening) asked me if I needed any medical assistance, and all I wanted was just a bit of water.

So what happened? Without being too technical, the constant-pitch governors tend to get “stuck” on their highest setting when setting full power for takeoff on the Austro engines. This is why the engine gauges are always in the yellow area when at 100% power for takeoff, and you should reduce it to 92% within a few minutes. Without eliminating other potential issues, the governor could get “unstuck” by alternating between the two ECUs and/or moving the power lever up and back down a few times.

So, after many calls to my dear technician and many videos texted to him and back, plus a super friendly Swiss investigator on the scene within an hour, I was free to try again—which I was way too exhausted to do that day.

One last thing… More complicated airplanes like turboprops have a switch or button that allows you to check the governor on the ground. But what I have done since that day with the DA42 is add my own “governor check” before takeoff, which is conducted by going up to a high-power setting, and then reducing power fast to see if all works properly. I cannot say it will solve all problems in the future, but it does make me feel a bit better. That and the fact I chose to turn around that day last winter. Guy Katz
Guy is based in Munich, Germany, and after getting stuck in Austria once because of heavy fog with a rented Cessna 172, he decided to pursue his instrument rating, which was followed by buying a Diamond 42 with a few friends. Now, he spends his time trying to find excuses to fly all over Europe - for business & pleasure.

Flying a Russian biplane through Alaska

A different kind of concrete jungle
Scroll to top