Blog - Latest News
You are here: Home1 / Article Archive2 / I was there3 / Flying a Russian biplane through Alaska

“I’m sorry, but your permission to fly to Russia has not yet been granted.” The words echoed and a wave of disappointment resonated before our eyes. We had filled out 80 pages of paperwork, gotten our visas from the Russian embassy, faxed in our passenger manifest, and traveled… all the way to Nome.

We had a huge going away party in Anchorage, Alaska, well wishers stopping by the big plane at Lake Hood, hors d’oeuvres were served, the blender with the lawn mower engine whipped up delicious drink concoctions, and everyone wished us a bon voyage. Early the next morning we took off for Nikolai, a native village just this side of McGrath—the first night’s stop.

At Nikolai (population of around 150) we were greeted by the entire village: barefoot kids, teenagers on four-wheelers, the principal teacher, village elders, and the city manager handing out pens inscribed with “Welcome to the City of Nikolai—enjoy your stay!” We were invited to tour the school (very impressive), visit the Russian Orthodox church (charming in its rustic beauty), visit the oldest resident of the village to hear his stories of the old times, and enjoy a tasty fish fry in our honor. 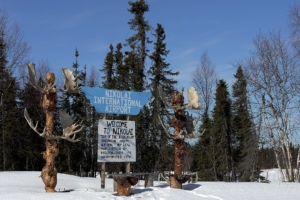 That’s an international airport in Alaska—dirt runway and all.

We camped happily that evening and early the next morning (after a blueberry pancake breakfast) the city manager, Roger, approached us and asked if there was, perhaps, an extra seat on the plane. Yes there was, so he scurried home, grabbed his sleeping bag and tent, and vowed to continue the journey with us. Us being: Sonja, a former commercial pilot for United Airlines, now living in Fairbanks and flying for an air charter service; Matt, an adventure seeker from Houston (Texas, that is!); Mary Lou from Maui, Hawaii (and a former resident of Valdez); Neal Oppen and Douglas Fulton, who co-own the big bird; and me. We took off, waving a very fond farewell to all of the wonderful villagers who came to say goodbye.

A brief fuel stop in McGrath was next, and the city manager proved himself invaluable to our trip—he secured us a truck so that we could all bounce around on the dirt roads and take a tour of McGrath. I must say, they have the nicest espresso stand around that part of the country, and a very famous bar as well.

Then on to Nome, that famous gold city by the sea, the terminus of the Iditarod Trail Sled Dog Race. We got there just in time to have a dinner rendezvous with all the other pilots and passengers getting staged for the air convoy to Russia. Basically, eight other planes and a total of around 20 people were signed up, paperwork in order, fuel tanks filled, GPSs waypointed—ready to cross the Bering Straits, eager to complete and celebrate the first opening of the VFR route for private planes to Russia. And, alas, as irony would have it, our plane, a Russian Built Antonov An-2, the workhorse of the Russian air fleet, was the only airplane not immediately granted permission to land in Russia, because it is (only in the US mind you) considered “experimental.”

That wave of disappointment that crossed our faces quickly dissipated—there was much to do and see in that part of Alaska, and we were ready!

After a celebratory evening  in Nome we departed the next morning for the Serpentine Hot Springs, about 100 miles north of Nome. We were forewarned that the runway was short—oh, about 900 feet in length, but we were told that we probably would be able to land there, just to be really careful. And careful we were: the landing was skillfully executed and just as we all clapped and shouted hurray, we realized that the pilots had not shared in our joy. Actually they were pretty quiet, because we were stuck…. in the tundra… in the middle of… nowhere. The pilots had decided to turn the plane around to prepare for takeoff and had just barely left the runway to use a wee bit of the tundra to turn on and then the big plane had sunk, and was still sinking, and not so slowly.

Did I mention that we had seven wonderful people on board? Well, everyone pitched in and emptied the plane: an amazing amount of luggage, food, and survival gear (not to mention the chest freezer, microwave, tables, etc.) We even removed as much fuel as we could to lighten up the six-ton beast. And we dug and pushed and rocked and just when we were scratching our heads, two hikers appeared out of nowhere. With the increase in person power and the Antonov’s mighty engine, we were able to get unstuck and finally enjoy the hot springs.

The springs flow out of the ground in an area of tors (magma plugs from an ancient volcano) at a scorching temperature, but when mixed with the cool water from the local stream it makes for a very pleasant soak. There is a structure built over a pool, as well as a rustic kitchen in a bunk house. Certainly one of the nicest, and most remote, hot springs in Alaska. 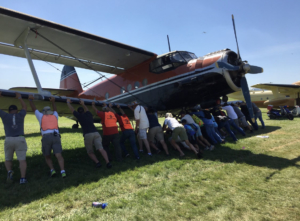 It takes a lot of hands to push the big An-2.

On to Kotzebue and a grand tour of the city. One person we met there told us that the last time he had visited the hot springs he saw a Cessna 206 flipped over on one end of the runway and a Stinson overturned on the other. Wow—we felt so lucky!

We continued on and that night we landed in the tiny native village of Hughes, a beautiful village of around 60 folks in a pristine setting on the Koyukuk River, surrounded by forested hills. We received a very warm greeting in Hughes and the washeteria was opened especially for us. I wonder if they were trying to tell us something…

Then on to Fairbanks, where we camped at the Air Camp Park. What a terrific idea—just like a car camper park, but for airplanes. A lot of folks stopped by to visit us and take a tour of the plane, help with dinner, and some even came back the next morning to bring us breakfast. Ya gotta love that.

Trying to beat out the incoming weather, we left early and had Talkeetna, the jumping off point for climbers of Mt. McKinley, in our visions, but the weather beat us to it and we were forced to land at Summit Airport, about ten miles south of Cantwell. Stuck, we thought, we are stuck and grounded. But before we knew it, a pickup truck appeared and offered to take us to a hunting lodge where we could stay in the bunkhouse for next to nothing. We didn’t have to be invited twice, so off we went to Cantwell, where we had a delightful dinner, a cozy bunkhouse, and even a home cooked breakfast in the morning.

The weather report was not looking good for the next 36 hours, so we secured the plane, said goodbye to our generous hosts, and hopped on a bus to Anchorage. It was two weeks later that the weather finally cleared. Douglas and Neal went back to Cantwell, picked up the plane, and had a beautiful flight back home to Valdez, Alaska.

I guess we will have to put off our trip to Russia for another time, because shortly after returning home to Valdez, we flew our big plane all the way down to Central America. But more on that later… Douglas Fulton
Douglas is an ASEL, ASES, Commercial Rotorcraft-Helicopter pilot with over 3000 hours. He has flown the Robinson R44 and Stinson 108-3, among others. He sold and retired out of an Alaska-based helicopter operation, keeping one ship to play with. Sadly our AN-2 is no more—it was lost to an engine failure after takeoff. Nineteen years of marital bliss!

Safe landings are no accident

“Geneva Tower, I have to go back”
Scroll to top