Blog - Latest News
You are here: Home1 / Article Archive2 / I was there3 / A gear problem?

After fifteen years flying one rented Cessna 172 or another, I finally bought my first plane with a few partners: the Diamond DA42, a perfect plane for traveling in Europe. It had it all: radar, deicing, and two engines. Getting the multi-engine rating was a blast, and I took the checkride in Innsbruck, Austria, one of the world’s most magnificent airports.

And now, I had them both—a plane and all the ratings that go with it. And, of course 400 hours or so, which made me that “great” pilot. And so it was time to take it all to the test. I took two friends and off we flew to Geneva, Switzerland, a breeze of 1.5 hrs with the DA42. The mission: to attend the yearly car show, of course! 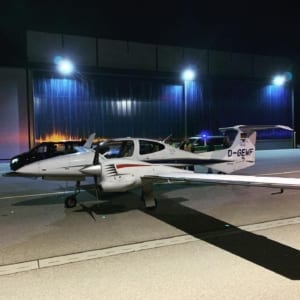 The DA42 is a great way to travel around Europe—especially when the gear comes down.

It was a quiet and beautiful evening. We were on the flight home to Augsburg, Germany. The DA42 was running smoothly, and my passengers and I enjoyed the twilight, which turned into night somewhere over the Alps. Strictly according to plan, I was then on approach to our home airport, Augsburg, and reported “fully established on ILS 25,” and then came the shock, there were no three green lights for the extended landing gear.

I tried recycling it again in and out, and still no lights. I reported a go-around to fix the problem and worked through the emergency checklist, and yes, there was still no green light. At this point, I started to prepare mentally for a belly landing, also calmly (or as much as I could) informing the passengers.

While I had the feeling the gear was out (speed, wind noise), no lights mean no safely extended landing gear. The friendly controller offered to look at it with binoculars, so I approached again on a low approach, and he said, “I think the gear is extended, but I’m not sure; it’s too dark!”

The controller sent all other planes landing at Munich International to another frequency and calmly explained that she is now exclusively with me. I wish I knew who to thank for that reassuring voice in those minutes. But she also asked the creepy question of, “passengers and fuel onboard?” Thankfully, my passengers remained calm and let me work. The controller then asked me for a few more minutes so that the fire department could prepare for our (belly) landing, sending teams for nearby cities. I will never forget all the blue lights coming from all corners in the direction of the airport.

In the meantime, I tried again to fix the problem, and among other things, I finally tried to turn up the light dimmer switch—and the three green lights were immediately there.

What happened? In the twilight, I gradually adjusted the dimmer down to the minimum to not be blinded!

So that second, I called off the emergency, we landed gently, but we were still escorted by around 20 emergency vehicles to our hangar, where I had to fill out a report with relief.

The next day I learned that an acquaintance pilot had experienced the same thing a few weeks earlier, with a DA42, too, and had landed with the engines switched off.

Here is what I learned. The Diamond DA42 had an issue unknown to me, since I had never flown so long at night: below about 25% dimming, you can no longer see the landing gear and flap lights. But checklists are not perfect, and I was proud to act professionally, despite the “feeling” that everything was OK after all. Today, we have “Check Dimming” handwritten under the appropriate item on the emergency checklist. Guy Katz
Guy is based in Munich, Germany, and after getting stuck in Austria once because of heavy fog with a rented Cessna 172, he decided to pursue his instrument rating, which was followed by buying a Diamond 42 with a few friends. Now, he spends his time trying to find excuses to fly all over Europe - for business & pleasure.

The best regulations
Scroll to top