Blog - Latest News
You are here: Home1 / Article Archive2 / I was there3 / A different kind of concrete jungle

Sometime in the late 80s, somewhere in the Midwest (I think it was Grand Rapids), I taxied a USAir BAC 1-11 toward the terminal after landing on a flight from Pittsburgh. I remember the airport had a small, older terminal and there were no jetways, those loading bridges that almost all airline airports have now, so passengers walked on the ramp. No problem—the BAC 1-11 had its own stairs that slid out from below the passenger door. 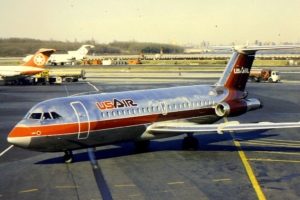 Between terminal and airplane lies a minefield of sorts.

Don’t get ahead of me. It’s coming, just not now.

A flight attendant put down the stairs. Our passengers got off and dutifully followed the line of cones that led them to the terminal.

It was a beautiful warm afternoon with a light breeze and low humidity. The first officer and I sat in the cockpit with the windows open, doing what you do on a short turn around: filling out paperwork, getting a clearance for the return flight, watching airplanes. You know the drill. Meanwhile, the workmen finished that section and left.

Boarding began for the next flight. A trickle of new passengers came out of the terminal door, singly and in small groups, making the walk, following the cones. After a while the boarding trickle stopped. It was departure time, we were about to close the door.

Running out of the terminal came Joe Businessman in a suit and tie, shoes shined, hat on head, briefcase in hand. He was going to make that flight. His career was at stake. He went straight into the concrete up to his knees and kept going on a line to the airplane. When he came out of the concrete, the lower halves of his legs and his shoes were covered with gray glop, but he was still going forward. We lost sight of him as he went up the stairs into the airplane.

The first officer and I were rocking in our seats, howling with laughter. We were still laughing when the lead flight attendant opened the cockpit door and said, “Be quiet. He can hear you two laughing up here.” Somehow we regained enough of our composure to get the engines started and taxi out.

On the flight back to Pittsburgh, the flight attendants told us they gave him club soda and towels to clean up with and they cleaned the wet concrete footprints down the aisle of the airplane—which is a testament to the dedication of the great flight attendants we flew with in those days.

Sadly, I don’t remember the names of any of the other crew members. If you were there please contact me and let me know if you remember that day as I do. Steve Robbins
Steve Robbins was the airport kid, that kid who rode his bicycle to the little airport at the edge of an Ohio town and hung out. He’d found his place. What came first was an avocation, then an enjoyable 32-year career at US Airways. After retirement a chance meeting with the pilot/owner of a CitationJet led to an adventurous second career of corporate flying in Cessna Citations. He has now gone back to his roots, a grass runway in the country where he flies a Cherokee 140. He feels he is damn lucky to be there.

“Geneva Tower, I have to go back”

Flying my Canadian airplane in Trinidad
Scroll to top