Blog - Latest News
You are here: Home1 / Article Archive2 / I was there3 / Flying my Canadian airplane in Trinidad

I got my Private Pilot certificate in Calgary, Canada, in 1978 and at that time was fully employed as the manager of an electronic business for a Japanese family who had their head office in Vancouver. One of the contracts we had was with the largest Lincoln dealership in all of North America and I became good friends with the owner, who had his own aircraft including a Navajo, Seneca II, Mooney, and Piper Cub. We went flying regularly.

I came back to Trinidad in 1981 and went directly into business, so that too kept me flying privately. When I started having difficulty renting an aircraft, I reached out to my friend in Calgary. He found me my 1979 Piper Dakota with just over 900 hrs total time. This aircraft was in the same hangar as my friend’s airplane, who at that time owned a Cessna 182—those were the only two in the hangar. The Dakota was owned by one of his friends who was in the oil business, and he convinced him to sell me the airplane.

I flew from Trinidad and Tobago to Calgary and went directly to see the aircraft I was purchasing. My friend was a very particular individual who looked after his aircraft very well. Knowing him the way I did, I put my full trust in him to find me an aircraft. When he told me that he did not have to go far to find me one and that he would convince his friend to sell me the Dakota, that’s all I needed to know. 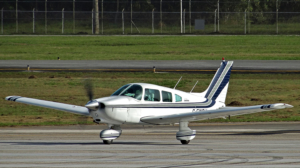 The day I took delivery was October 10, 2009, and the first time I actually sat in the aircraft was when I began my flight to Trinidad. My trip to Trinidad took five days, I used the opportunity to do some flight-seeing and visit places on my way down.

The first leg was Great Falls, Montana, where I cleared customs, then it was an overnight at Rapid City, South Dakota. The next day I flew to Little Rock, Arkansas, before heading to Fort Lauderdale, Turks & Caicos, Saint Maarten, and finally Trinidad.

What I enjoyed most was that every time I landed at one of those airports in the US, they gave me a welcome over the radio wishing me a pleasant stay. The next morning, on my departure, they thanked me for visiting and said they hoped I had a wonderful stay in their city. I could not believe that every city I landed at in the US had the same welcome over the tower frequency. I think they recognized the Canadian registration very well—or they knew exactly who I was! I felt like a leader of a country.

I am currently the president of the Trinidad and Tobago Light Aeroplane Club, but the Dakota is still on the Canadian registry and I fly with my Canadian license. I bring a licensed A&P from Canada every year to do my annual inspection. The cost of the flight, hotel accommodation, and his working days in Trinidad (with some help locally) still works out to be less expensive that having the aircraft registered 9Y in Trinidad.

Flying in the Caribbean is fun, with lots of nice islands to visit—some within 45 minutes, some within 1.5 hrs. One thing I love about my Piper Dakota is the range: it takes me to all of my destinations without having to fuel along the way and in most cases and I can make it back to Trinidad without refueling at my destination. I am currently working with others in the aviation industry in Trinidad and Tobago, building the business and assisting where possible.

Still, one of my most memorable moments after earning my PPL was in Calgary. The day after my checkride, I took off from the Spring Bank Airport, located ten miles outside of Calgary. My plan was to land at Calgary International Airport, have a cup of coffee, and then fly back to Spring Bank. When I contacted Calgary ATC, they instructed me to fly direct and report over the CN Tower in the city. When I reported my position, I was told that I was #2, following an Air Canada  L-1011 TriStar, and directly behind me was a Canadian military jet—keep your speed up. Charles Carvalho
Charles got his start in the aviation industry by getting his PPL at the Spring Bank Airport, 10 miles outside of Calgary. He then moved to Trinidad and entered the business world. As president of the Trinidad and Tobago Light Aeroplane Club, he has organized several trips to neighbouring islands with other club members. He also assists local business aviation friends with their operations, finding ways to get their operations certified and operational according to local laws.

A different kind of concrete jungle