Blog - Latest News
You are here: Home1 / Article Archive2 / I was there3 / From Private to ATP—the closing of a cycle

It was a humid spring, nine years ago, when I first arrived in Florida full of dreams: I was on a mission. Having taken an unpaid leave from the airline for which I was flying for as a flight attendant in Brazil, I had less than one year to go “from zero to hero.” In a bit less than the 300 days I spent in the United States between 2012 and 2013, I started my Private in the Cessna 152, finished it, went through the Instrument in the Cessna 172, the time building and, last but not least, the Commercial Multiengine in the Seneca. By mid-April, I had a brand new FAA certificate, and with the end of my student visa validity, I was back in South America. 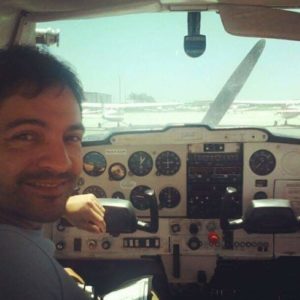 Like many careers, this one started in a Cessna 152.

Before leaving DeLand, I considered going for the ATP written, and did some prep work. But I would have to get it checked in two years, and it was unrealistic to think I would be able to meet the requirements by then—I was just shy of 260 hours. It was a wise move: the rest of the money I had from selling my apartment (pretty much my only reserves after a decade working) in a bold career bet would be used to convert my Commercial to a country where I could effectively use it to get a job. By August 2013, after a written exam, a couple flights, and a checkride, I had a Brazilian Commercial certificate based on my FAA.

A long year followed, with some sparse flying in GA–both in Brazil and in the US, renting during my vacations–and several false job alarms. Many of us have gone through this: “Your CV is in the chief pilot’s desk, he will call you tomorrow!” or “Is your medical valid? There is this November Citation and they are looking for a co-pilot.”

In the meantime, I resumed my duties in the cabin, flying the 737NG across the continent. It was a career I enjoyed, with its ups and downs, but after nine years, an upgrade, and one million passengers, I was ready for the next move—and I was not getting any younger. By mid-2014, weeks before the World Cup in Brazil, I decided to write to my airline’s chief pilot. In the email, I explained to him my situation: with a college degree and an ICAO English 5, I met the requirements to apply for the first officer position, and would rather remain in the company than flying for our competitors. Would they be hiring any soon?

After a week of silence, the internal web page was showing positions available for employees! It was a long tradition in the airline to hire first from within before opening to external candidates.

After a couple intense months of studying, flying as flight attendant, and going through a four-step recruitment process between flights, the over 60 applications ended up as six new FOs. Adding four re-hires–from the great reduction that happened after I took my unpaid a couple years before–our batch was formed. Months of training followed, over 70 hours in the sim, and by March 2015 I had started my line training, departing runway 10 at Rio de Janeiro International.

Since we were very raw at that time, the training took forever, and not until July were all of those who had made it to the end of training released. The learning curve was huge: the Boeing 737NG (and now because of the MAX issues this is widespread knowledge) is a unique design: powerful, efficient, but with a cockpit that mixes the most modern avionics with somewhat vintage systems and crew alerting resources.

A year later, I was sent to the shuttle service group of pilots, operating in the second hardest airport I have ever been to: Santos Dumont, in downtown Rio. It was a logistical nightmare for a commuting pilot like me, and despite the great experience it was a bit too exciting for the amount of money we were making. We flew through the Olympics in Rio, and the promise that we would be based in São Paulo again–something our seniority granted—was being constantly delayed. Two years later I met the requirements to apply for a job abroad, and the decision was made. After an interesting, heart-racing assessment and stand-by process, I left the Boeing 737 after 1747 hours in the right seat.

As one might be thinking by now, I had met the ATP requirements. Except that in Brazil, regardless of whether you are the pilot flying, the second in command at an airline can’t log pilot in command time unless you are under command upgrade training. And since the command upgrade was a good decade away, I was stuck short of the 40 PIC hours to be able to get my ATP. Nevertheless, I had already done the Brazilian written, so from an ICAO perspective, I had what is commonly referred as a “frozen ATP.” 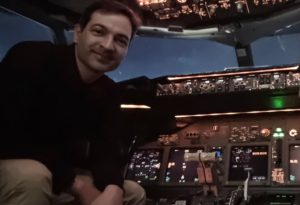 Not all Boeings are created equal.

And  so it was that, with those qualifications and a little over 2000 hours,  I joined the “heavy plastic” on the other side of the globe. Flying the Dreamliner is, like the name suggests, a dream. But learning the details of the new job, well… that was a proper nightmare! The amount of knowledge I got in those first months, from the type rating to the exposure of flying from the dust storms in the Middle East to the blizzards of Scandinavia, from the desolation of Africa to the busy airspace of Europe and Asia—that was something!

One year later, during my third simulator checkride in the Dreamliner, much more comfortable with all the novelty of flying in the Gulf, I went for my ATP. Since our every six month evaluations are already very demanding, the Airline Transport Pilot itself required just a couple extra maneuvers. The paperwork involved was the real challenge, but at least on my Middle Eastern license (one of the three I held), I was now more than a CPL. That would give me the opportunity of a command upgrade still years away, yet more immediately, to become an in-flight relief pilot–meaning, flying in the left seat during cruise so the captain could take his rest in three-crew, longer operations.

Like everyone else, I had my plans for 2020. Like everyone else, they had to be postponed. But finally, having survived those heavy days, and after a long three years, I was back in America. The time had come to finish that long held promise from when I completed my Commercial in 2013. Now, though, the rules were different: before the written, I had to go through an ATP-CTP course. It took me a week of classroom (especially hard, because the school was in Lakeland and we could hear the Sun ‘n Fun fly-in going on outside) plus FTD and FFS sessions, but after reviewing many concepts that were common ground to us in the airlines, I took the exam on a sunny Saturday morning in Tampa. I celebrated the rest of it at Sun ‘n Fun–my only real time off during those two weeks.

Sunday I was back in the classroom: time to relearn from my old teacher, the 737. Seriously, after four years in the extremely friendly 787, the baby Boeing was a real hustle. The complexity of its systems, the weight of its controls, all that in a very short period of time and early morning simulator sessions were only achievable because of my previous three years’ experience. It is not like riding a bicycle, and it was not a walk in the park, but exactly nine years and one day after my FAA Commercial, I passed the oral and simulator check.

It took almost a decade, but this mission–and cycle–was complete. “Being of good moral character,” the only requirement I think I met when I first arrived in Central Florida, was now joined by the others of the 61.153. But, as I usually say when talking to the students starting in this amazing industry of ours, passing a checkride does not mean you know it all; it means only that you know enough to keep learning. Let’s get this new exciting cycle started!

Friday Photo: flying into the sunset