Editor’s note: This article, from the November 1960 issue of Air Facts, is a classic example of Richard Bach’s mastery of both aviation and language. In telling the simple story of an hour in an air traffic control tower during the graveyard shift, he captures the beauty of airports and the common bond among pilots. “What if every pilot knew, I thought, that we are already brothers?”

At night you think funny things

I closed the door behind me just as the twenty-four-hour clock by the light gun ticked through 0300. It was dark, of course, in the tower, but it was a much different sort of darkness than the black I had just stepped in from. That dark was a thing that anyone could use for any purpose; for cards or for crime, or for the war hinted and threatened in the headlines downstairs.

The darkness in the aerie of glass and steel was a specialized dark. Everything it touched had the same air of professional purpose about it; the clock, the lightly hissing radio receivers, in their bank along one low wall, the silent neverending sweep of the pale green line of the radar scope. It was a professional darkness to shroud the world of people who fly airplanes. There was no malice in this dark, it was not there to drag the airplanes down or to make it difficult for them to fly. It was just a matter-of-fact, businesslike, I-am-here-now darkness. The beacon rotating with its busy hum a few feet overhead was not turning to fight this dark, but to pinpoint a landing field on a map of black.

The two tower operators who worked the graveyard shift were expecting me, and extended hands from behind the orange glow of their cigarettes. “What brings you up here at this hour?” one asked quietly. All the talk on this shift was quiet, as if to keep from waking the city that slept at our backs.

The other man laughed, again quietly. “Now you know,” he said. “This one minute is a pretty good example of what it’s like all through the shift.” 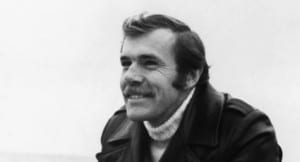 More than almost any other author, Richard Bach captures the magic of aviation.

The static hissed lightly on in the speakers, the light gun hung, unswinging from the ceiling, and the pale line of the radar turned endlessly, tirelessly. The airport was waiting. At that moment, somewhere out in the starred night sky, an airliner bored steadily ahead, her long aluminum nose pointing at the field guarded by this tower. It wasn’t even an image yet on the farsighted eye of the radar, but the first officer was calling for weather at our field and leafing through his briefcase for letdown plates. His engines roared steadily on in the darkness outside, and the needles of the oil quantity gages had dropped down, confirming the length of the flight.

But in the tower the air was quiet and still. The blue stars that were the taxiway lights stood frozen in their orderly constellation on the field, waiting to guide any pilot who thought of taxiing at this hour.

Down on the lightplane ramp, a flashlight snapped on, making a little yellow eye on the concrete with its short beam. As I watched, the eye jumped up the trim fuselage of a Bonanza, found the door, and disappeared into the cockpit. It reappeared in a moment, and for a second I saw the shadowy form of the pilot who held the light as he stepped off the wingwalk.

The tower operators continued their quiet talk together about the places they had been and the things they had seen. I watched the eye of the flashlight, fascinated. Where was the pilot going? Why did he leave so long before the sun? Is he a transient pilot going home or a hometown pilot leaving?

The little pool of yellow light stayed for a moment on the aileron hinges, splashed down the leading edge of the right wing, disappeared beneath it into the wheel wells. It appeared suddenly on the cowling and waited patiently until the dzus fasteners were half-turned open and the cowl lifted. It jumped eagerly onto the engine, checking the spark plug terminals, the oil level; it wandered for a moment where it pleased around the finned cylinders and the low-swung engine mount. The cowl came back down and fastened shut. The light brightened as it moved the length of the propeller, and was gone for a minute on the other side of the airplane. It appeared again on the fuselage and slipped into the cockpit.

The flight line was as dark as it had been when I came, but out in its dark now was a man, and he was getting his airplane ready to fly. In the binoculars I found the faint glow of the dim cockpit lights as they came on, and in a minute the redgreen of his navigation lights flashed, giving dimension to his machine. And suddenly the silence in the aerie was broken.

“Tower, Bonanza four seven three five Bravo on the ad ramp, taxi for takeoff.” The voice stopped as suddenly and abruptly as it had begun.

In our high glass cube the smooth professional voice of the tower operator answered, speaking into his microphone as if this were the thousandth call he had answered this morning, instead of the first.

A single brilliant white light slammed into the darkness of the ramp below, and in its white the concrete showed its own true white and the yellow of its painted line. The bright light moved easily through the blue constellations of the field, homing on the end of the runway’s long strip of white lights. It stopped, and flicked out. Even in the binoculars the cockpit lights were too dim to see; the only evidence of the plane’s form was a short break in the orderly row of blue taxiway lights.

In a minute our quiet air was broken again by the voice from the VHF speaker. “Tower, three five Bravo; think you can work me in for a takeoff?”

“Wise guy,” the controller said, reaching for his microphone. “Might be able to squeeze you onto the schedule, three five Bravo. Cleared for takeoff, wind calm, no reported traffic.” 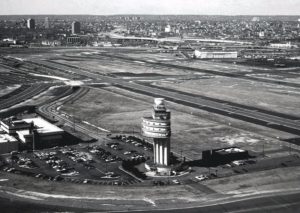 What really goes on in that tower?

The black blot against the lights moved ahead as he talked, the only motion on a still field. In fifteen seconds the field lights shone as before, and a flashing green navigation light reached for the dark horizon.

“Beautiful night,” the pilot said thoughtfully to the VHF. The field was still again.

Those were the last words we heard from three five Bravo, and his lights faded into the night. I never will know what field he calls home, or where he was going that night, or who he is. But in that one last call, still captured on the impersonal tape recording of the tower, the pilot of that Bonanza suggested that perhaps pilots really are different from all other men.

The field waited again, patiently, for the next airplane.

What a fraternity that would be, a real brotherhood of all the men who lift airplanes into the sky!

“This will be a Lufthansa flight coming in,” the controller said, pointing to the disc of the radar scope.

Lufthansa was a blurred ellipse, a quarter of an inch wide, moving slowly in from the edge of the screen. He left a ghostly green luminous trail that made him look like a tiny comet pointed toward our tower at the center of the scope.

Looking out from the tower’s glass into the crystal night air, not a light moved in the sky. The comet closed on the center of the screen, the minutehand of the many-numbered clock swung around, and still the lights in the sky were stars.

Then all at once Lufthansa was a flashing red anticollision light in the distance, and her first officer pressed the mike button on his control wheel. “Tower, Lufthansa Delta Charlie Charlie Hotel, fifteen miles east for landing.” The first officer spoke easily and precisely, and Lufthansa was pronounced “Looftahnza.”

The thought swept me again. He could just as well have said, “Deutsche Lufthansa für Landung, fünfzhen Meile zum Osten,” and he would have been as much, or even a little more a brother of the fraternity than I, standing in the high tower.

What if every pilot knew, I thought, that we are already brothers? What if Vladimir Telyanin climbing the kicksteps of his Mig-21 knew it as well as Douglas Kenton in his Meteor and Erhart Menzel in his iron-crossed Starfighter and Ro Kum Nu tightening the shoulder harness in his Yak-23?

Lufthansa swung easily down the ILS glidepath, his landing lights shining like bright eyes looking for the runway.

What if the fraternity refused to fight among itself?

Lufthansa taxied close to the terminal building, and in the tower we listened to her four engines whine down into the quiet.

The radios hissed softly on, the sky was still again, the green line of the radar scope agreed that we were alone once more in the darkness. As the hands of the clock by the light gun touched 0400, I said my thanks and goodbyes to the controllers and stepped to the iron grating and stairway outside. I felt the difference of the blackness again, the same dark that touched the pages of the newspapers down at the end of this stairway.

Above me, and above the field of sleeping airplanes, less one American lightplane, plus one German airliner, the long beam of the beacon swept around. Brothers. My leather soles rang on the metal stairs. At night, in the dark, you think funny things.

What if they all knew? I thought.

Weight and performance—there is a tradeoff

The siege of Khe Sanh
Scroll to top