The story I am about to tell is true. It happened to me while assigned as a C-130 pilot during the Vietnam conflict. My home station then was Naha Air Base, Okinawa, an island in the East China Sea south of Japan. From 1967 to 1970, my unit sent its flight crew members and aircraft on temporary duty to Cam Rahn Bay, South Vietnam, for two-week rotations.

While in Vietnam, our job was to airlift US personnel and equipment from one American base to another. The itinerary covered most bases daily. The equipment airlifted included jeeps, light trucks, forklifts, spare parts, food supplies and, on rare occasions, North Vietnamese prisoners, also known as VC or Viet Cong, captured during the ground battle. The VC prisoners were kept on an island near Saigon. Of all the daily runs, the most desirable route was the fresh fruit and vegetable run to a town located in a mountainous area—Dalat—beautifully kept and untouched by the war. 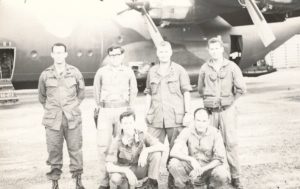 A C-130 flight to Khe Sanh was not an easy mission for the crew.

Someone said that the Viet Cong vacationed at Dalat. There was no worry concerning small-arms ground fire during landing and takeoff. It was as if an unwritten truce had been made between the good guys and the bad guys. The fruits and vegetables (bananas, pineapples, papayas, mangoes, green beans, lettuce, sweet potatoes, etc.) were transported to Saigon for further distribution to other American bases. On these flights the entire aircraft smelled like a produce market. The best part of the mission was tasting and keeping some of the precious cargo.

At the height of the VC offensive, my crew and I were scheduled to airlift munitions to Khe Sanh, a US Marine Corps base near the North Vietnam border. We had heard that the fighting there was fierce—heavy American casualties. The VC were resolved to capture Khe Sanh as an example of VC victory. At the same time, the Americans were determined to defend the Khe Sanh at all cost. Khe Sanh became a critical piece of real estate in the ground battle to demonstrate fighting power and national resolve.

Our scheduled takeoff time was early. I didn’t get much sleep that night. I felt apprehensive about the mission. I got up at 0300 to get ready. We reported for flight briefing around 0400. We were briefed that our mission would be to fly to Danang AB and pick up munitions for delivery to Khe Sanh. I hoped that the mission for today would be changed, but it wasn’t. With mixed emotions, we inspected the aircraft carefully. Perhaps some discrepancy would delay the flight? At the same time, though, we wanted to make sure we had a dependable aircraft for the mission. I conducted a crew briefing to make sure everyone knew his duties, what to do in case of emergency such as how to evacuate the aircraft, and what to do if we had to bail out due to aircraft damage.

After everyone loaded his personal equipment on the aircraft, we started the checklist for engine start. At 0530 we taxied out and took off for Danang AB at 0600. Nothing much was said during the flight. I felt insecure, anxious, and my palms sweated at the thought of the landing at Khe Sanh.

In 30 minutes, we landed at Danang AB. We had plenty of fuel so we taxied and parked at the munitions area for upload. While the flight engineer and loadmaster supervised the loading, the co-pilot and navigator went with me to check the latest weather and intelligence information for Khe Sanh. Fog had been forecast earlier. The briefing officer said that the weather was low overcast but visibility was clear. The intelligence officer stated no ground activity had occurred this morning; however, he warned us to expect mortar attack while the aircraft was on the ground.

At Danang AB, we could feel the Tet Offensive was on. The tower operator was very serious and deliberate in his radio transmissions, at the same time being courteous and helpful. The same was true of the weather and intelligence briefing officers. They knew we were supporting a base at Khe Sanh that was experiencing extremely hostile pressure. They were doing their best to help us accomplish our mission. It was a team effort.

Da Nang was a bustling air base during the Vietnam war, and the place to take of a load for a C-130.

After 30 minutes of ground time, we got back to the aircraft, already uploaded with five pallets full of boxes containing 30,000 lbs. of badly needed ammunition. The 8 x 10 pallets were designed especially for rapid ground offload in case of emergency. Another C-130 was approaching the area to upload as we got ready to taxi. I felt comfortable thinking that other C-130s were supporting the effort. We were not alone.

But my throat still felt dry as we taxied out. I felt sweat drip under my arms. I took a long, deep breath to settle my nerves without making it noticeable to my copilot and flight engineer. As we taxied toward number one position for takeoff, the sun was just starting to come up. It looked like a beautiful day was about to begin. We made our takeoff for Khe Sanh at 0730. On schedule.

As we climbed out, I looked down at the lush green jungle dotted with bomb craters. You can tell the craters made by the B-52s, all in one line. Further on I could see where the green jungle had turned brown—where Agent Orange had been sprayed to clear the foliage. At 10,000 feet, I leveled off and headed for Khe Sanh.

Khe Sanh was a landing strip on top of a hill with valleys all around it and mountains nearby. It had a short temporary runway—about 5,000 feet long—made of heavy aluminum planks hooked together to form a solid platform. I had landed there on two occasions previously so I felt comfortable about the hazardous terrain nearby and understood the flying skills required to make a successful approach and landing.

I called Khe Sanh operator on the radio as we approached the area. The ground combat control team operator told me that only one aircraft was allowed to land at a time so I would have to hold over the base until my turn. I acknowledged the instructions and listened attentively for further developments. I said to myself, “So far so good, not much hostile ground activity.” We stair-stepped our descent periodically until it was our turn. Finally, we were cleared to approach and land.

Landing was normal and we stopped immediately by reversing all four engines and taxied to the offloading ramp. With all engines running, the loadmaster opened the cargo door and lowered the ramp. At the proper time, I increased the engine RPM and told the loadmaster to get ready to release the rail locks when I released the brakes. I released the brakes, and pallets started coming out the back one by one. BOOM BOOM BOOM BOOM. At the same time I noticed dirt exploding on the ground about 50 feet away. We were being mortared, but could not hear the blasting noise because of the engine noise. 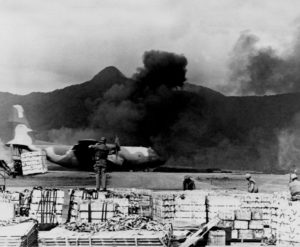 The fighting around Khe Sanh was intense, and a big airplane attracted attention.

The ground radio operator told me to hold my position so they could bring and load the dead and wounded Marines. I followed the instructions and kept all engines running with the aft door and ramp opened. The area became very busy. Soldiers were running to their bunkers and helicopters started taking off to clear the area to avoid being hit. The mortar rounds kept coming; tents were blown up, bunkers collapsed. The path of the ground explosions seemed to be headed our way. I thought about leaving when the ground radio operator called.

“Leave the area as soon as possible,” he said. “The aircraft is attracting the mortar rounds.”

Without responding to the radio call, I told the loadmaster to close up the aircraft as we taxied and to let me know when everything was ready. I proceeded to taxi for takeoff with my heart pounding. I was too busy getting the aircraft ready to worry about dying. In no time, we were rolling down the runway. I felt safer now that we were a moving target. We lifted off immediately. A moment later, I heard a loud explosion as the aircraft shuddered. I suspected we had been hit. As I headed the aircraft toward the South China Sea, I asked everyone to check his area for aircraft damage. There was none. Later, I heard a B-52 pilot telling the Khe Sanh radio operator that he had just dropped a bomb near our position in an attempt to hit the VC gunners. We were below the overcast and he was above it so the B-52 crew members were unable to see us.

At level off, we sat back and breathed a sigh of relief. I put the aircraft on autopilot and thought about what had just happened. We were extremely lucky. We felt safe again. We headed for our home base, Cam Rahn Bay, where we terminated the flight. The post flight party was a celebration I shall never forget. We must have drunk a case of beer apiece!

Six months later, our crew was awarded for the Marine Corps Presidential Unit Citation for our effort in support of the US Marines during the 1968 Tet Offensive. Larry Williams
Lorenzo "Larry" Williams was born in Guam in 1934, the son of a Filipino seamstress and a US Marine. After surviving the Japanese occupation during World War II, the family immigrated to Corpus Christi, Texas, when Williams was 13. He graduated from WB Ray High School and Texas A&M University, where he received a degree in aerospace engineering and was commissioned into the US Air Force in 1958. Williams flew the C-130 gunship during the Vietnam War out of Naha Air Force Base in Okinawa, where he earned the Marine Corps Presidential Unit Citation for his efforts during the 1968 Tet Offensive. He retired as a major after 20 years and worked as an engineer on the Bell Boeing V-22 Osprey and the Lockheed Martin F-22. Now retired from engineering, he and his wife of 62 years, Konnie, live in East Texas near the oldest of their four children and several of their 19 grandchildren and 10 great-grandchildren.

From the archives: Richard Bach on the pilot brotherhood

Friday Photo: sunrise through a tilt-rotor
Scroll to top