Blog - Latest News
You are here: Home1 / Article Archive2 / I was there3 / Weight and performance—there is a tradeoff

The similarities between a human being and an aircraft continue through life. Both are made for transportation. One is a biped, and the other is thrust-based winged machine. Both consume energy, one needs food and the other needs fuel for combustion. But both are equally hampered or helped by weight. Hampered with too much and functionally enhanced with less. 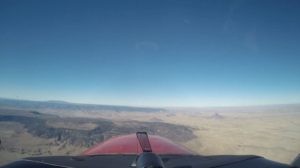 A long flight over featureless terrain does allow the mind to wander.

After a coast-to-coast flight both the elements came into view. Let me put the human issue to rest first: the heavier the person, the less he or she can carry in the aircraft. True statement, since the aircraft has a useful load limit. On the other hand, the heavier the person, the less likely he or she can ambulate longer distances due to limits of endurance. Another feature is that the weight of the person directly interferes with the joints that bear the weight and the pump that dutifully pumps the energy around.

Similarly, the heavier the aircraft, the more load bearing on the gear and limits of performance that it must endure. Now before we go stumbling into the pathophysiology of a human, I think we need to pause a bit. Perhaps the discussion about the aircraft is more relevant.

Four of us decided to fly from the Atlantic Coast to the Pacific Coast. The aircraft, a Bonanza, was loaded up to the gills with four of us, with a combined total weight of 670 lbs, plus 100 lbs of baggage and full mains with partially filled tip tanks (STC max gross weight of 4018 lbs). The entire weight of the aircraft based on the weight and balance was 3920 lbs based on the Bonanza performance app, and it correlated well with the calculated weight and balance of the aircraft. The rear seats were removed for comfort and the seat belts were used to secure the luggage.

Takeoff performance required 1750 feet of runway and would provide a 950 fpm climb on takeoff with a density altitude of -500 feet. Interestingly, upon reaching the cruising altitude of 10,000 feet, the cruise speed was 12 knots less than that calculated prior to flight. I tried various settings of manifold pressure, RPM, and fuel flow. Flying lean of peak, which the big bore Continentals are adept at, the speeds were consistently lower than advertised.

I opened the POH and accordingly found that at that altitude with 20.7 inches and 2450 RPM, the interpolated cruise speed should have been 165 knots, yet my true airspeed (TAS) was only 148-151 kts on a westbound heading. Going full peak, since the power output was less than 65% at 12 gallons per hour, I managed to squeak out 152 kts. But as we droned along and the countryside passed by, the heaped-up rocks of the Appalachians and the rolling hills of Tennessee passing by, the airspeed picked up to 161 knots. It was time to land at Memphis for fuel and rest. 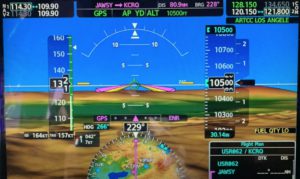 Groundspeed always varies; but why does true airspeed vary so much?

The next day, after fueling and a similar takeoff performance and cruise climb to 8,000 feet with 68% power, the lean of peak performance gave us a TAS of 154 knots. But as we neared Santa Fe for a stop, the TAS had increased once again to 161 kts. I am deliberately leaving out the discussion of the headwinds, which were screaming all the way at 32-42 kts. Maybe we would get the desired push on the way back. Pilots also dream.

Once again I opened the POH and tried to figure out the discrepancy between what should be and what was. The answer was plain and simple, and located in the top left corner of the POH performance chart. The aircraft performance TAS was based on a total weight of 3400 lbs and we were carrying 520 lbs more than that, even though this was well within the useful load limit of the aircraft based on the STC for the Osborne (now GAMI) tip tanks. So, extrapolating from that weight and TAS at lower weights, the cruise performance was in-line with the expected performance.

Which brings me back to the issue of the four forces that interact upon the aircraft in flight. Lift is countered by weight. The more the weight, the more lift must be generated—hence the angle of attack has to be higher to carry the load. The higher angle of attack leads to higher drag created via the parasitic nature of the exposed aircraft and the induced drag created by the wing vortices to the relative wind. With a constant thrust, the lower the TAS and hence the lower “performance.”

As the aircraft burned fuel at the rate of 68 pounds per hour, after a three-hour flight the TAS (performance) increased proportionately—quite the mental exercise that keeps the brain going on a long cross-country flight. By the way, if you wish to hear this during the actual flight (and see the sights and sounds) here is the video:

That brings me to the following resolution. If stops are planned, there is no need to fill the tip tanks unless the weather is bad—in which case it is a greater comfort to have enough fuel for deviations and alternates—but expectations should be for lowered performance. If the weather is CAVU and stops are desired to stretch the legs, then full mains is the desired model. Although if I was the only one flying, then full tanks, tips ‘n all, load the baggage, and off to the races for a quiet, comfortable ride to the destination without a stop, sipping a cup of tea and eating crumpets and finger food along the way.

So, some interesting points to ponder:

If the groundspeed is slow, it must be the headwinds. OK, let’s just leave it at that, although both are supremely interconnected. The blame fits so we let it.

If the true airspeed is reduced, throw the excess off board—people, bags, or whatever. That’s where the blame lies.

If both TAS and GS are slow, stay home til you can fly alone and stay within the POH performance parameters—and regale in the expected performance.

OK, OK, let us not be grinches. After all, it is a new year. Besides, it is more fun with people in the aircraft going places…

From the archives: Richard Bach on the pilot brotherhood
Scroll to top