Blog - Latest News
You are here: Home1 / Article Archive2 / I was there3 / An F-105 pilot creates his own fireworks show

In October of 1966 I was assigned to the 35th Tactical Fighter Squadron, stationed at Yokota Air Base outside of Tokyo, Japan. I had just graduated from training in the Republic F-105 Thunderchief at Nellis AFB, Las Vegas, and I was now a “qualified” fighter pilot.

There is and always will be a difference between being qualified and proficient, and I had a lot more to learn from the experienced pilots in the squadron than was written in the training syllabus.

The Thud, as we called her, was a demanding airplane but was easy to fly if you knew her limitations. She thrived on speed and had a very high wing loading, which did not make her a great air to air weapon in a so-called “dogfight” but made her a rock steady formation, instrument, and weapons delivery platform. 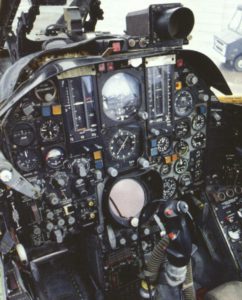 We flew the initial approach to the 360 overhead pattern at 350 knots before the 180 degree turn to downwind. A two-G turn would easily dissipate speed to the gear and flap limits prior to starting the base turn at about 250 knots. We planned to carry no less than 185-190 knots over the numbers and as soon as the mains touched we deployed the drag chute which saved the brakes and slowed you quickly and smoothly. Nothing shorter than a 8,000 runway and the longer the better, especially if your drag chute failed.

As I mentioned, because of her high wing loading she was never known as a formidable dog fighter, but we were armed with the 20mm Gatling gun which would deliver cannon shells at 6,000 rounds per minute. If anyone (Migs) got in front of us we could destroy them quickly. F-105s did shoot down at least 22 Migs in Vietnam and many of those were gun kills.

Our main defense was our speed and we knew we were headed for combat in Vietnam shortly. The pilots who had been in combat always drilled into us to keep your speed up! Never let her slow below 450-500 knots. Below that the gunners on the ground could track you easier and the Mig -17s, which were the predominant North Vietnamese fighters, could catch you.

We practiced different scenarios and got more and more proficient and comfortable in the airplane as we built up our experience.

One maneuver that I had heard about but had never seen or practiced was called the “high G barrel roll” or “high G roll.” This was also called a “last ditch maneuver” because it left you at a relatively slow speed and very vulnerable to anti-aircraft guns and fighters. We only planned to use it if you were trying to get a Mig off your tail and you were out of ideas and options, hence it being “last ditch” or “I hope this works!”

The high G roll was performed if you were above 400 knots airspeed or higher. You basically pulled full aft stick and full rudder deflection. The airplane did a rapid roll and dissipated about 200 knots almost instantly. If you had an enemy on your tail you hoped it would surprise him and force him past you so you might get a shot at him—but most importantly get him off your tail. Now you were vulnerable being slow but it might save your butt.

Our afternoon mission that day was to go up and practice the high G roll with two airplanes, one to be the attacker, the other being the defender. We briefed to swap places after we practiced the maneuver.

I was the leader and our flight of two took off from Yokota and proceeded to our practice area off the coast of Japan over the Pacific Ocean. We climbed up to about 25,000 feet, where I had briefed that I would go first. I told my wingman to separate, gain some altitude, and prepare to dive in for the simulated attack.

For some reason he took a little longer to get set up and I circled waiting for him to get close enough so I could execute the high G roll and try to get him in front of me. I was watching him diving down and accelerating towards my tail as I waited to get the timing right.

What I had failed to do was maintain at least 400 knots indicated airspeed and was distracted watching him closing in on my tail. This was a dumb rookie mistake. When I judged that he was in a simulated firing position I proceeded to apply full aft stick and full rudder. My airspeed was probably down to about 300 knots or less. Not a good place to be!

The airplane promptly departed controlled flight and went into some sort of wild gyration that was completely unpredictable. It was such a violent and uncoordinated maneuver that I cannot tell you what it did but it threw me around the cockpit violently and for several seconds I had no idea what was happening.

The tumble and negative/positive G forces caused the fuel tanks to vent a significant amount of fuel overboard thru the aft fuel vent and the gyrations finally stabilized into an inverted spin after a few long seconds. 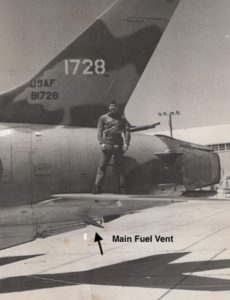 That fuel vent can lead to quite a fireworks display.

While being violently tossed around the cockpit with one hand on the throttle I inadvertently selected the afterburner momentarily. This ignited the the cloud of fuel that the airplane had vented and caused a huge fireball behind me and directly in front of my wingman—who was on my tail!

He saw me tumbling through the air and then a huge fireball, so he radioed me, “Fire! Fire! Bailout! Lead—you’re on fire!” This added to my stress and I was thinking, could he be right, am I really on fire? I had no cockpit indications of any fire or any malfunction but knew I was spinning out of control down through a deck of clouds.

Fortunately, I remembered my training for the F-105 spin recovery. Contrary to any other airplane I had ever flown, the F-105 spin recovery was idiot-proof. If you got it into a spin inadvertently, we were told to take your feet off the rudder pedals and put your hands in your lap. In other words, DON’T DO ANYTHING!

So I did this and it stopped spinning. I came out of the clouds about 10,000 feet over the ocean, pointing straight down. I took a deep breath, added power and recovered from the dive.

Not being quite ready to try this again, at least not that day, I climbed up and rejoined with my wingman. We had both seen enough and our fuel was getting low, so we decided to head back to home base. I never got the chance to practice this again and fortunately for me I was never in a position to have to use it.

Several months later, while flying combat missions over North Vietnam, I did have a Mig-17 attack and fire at me. High roll now? Naw, I never slowed down so I easily out ran him and I was lucky that his aim was poor. I was quickly out of his gun range.

One thing I can still see in my mind to this day is the muzzle flashes from his 37mm nose cannon blasting away at me!