Blog - Latest News
You are here: Home1 / Article Archive2 / I was there3 / When aviation comes to your front yard

Over the course of my career, I’ve had countless people in aviation help me. From a loaned part when I was AOG at a remote location to three separate A&Ps who, despite my offers to pay, helped my during the build of my SuperSTOL.

I have a lot of built up karma that I needed to pay forward. So imagine when I received a call from my neighbor saying, “Hey, did you know there is a helicopter in your front yard?” 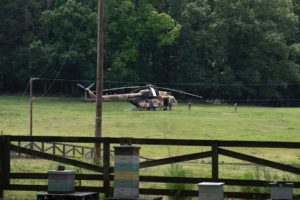 Well that’s not your everyday view…

Wait, what? A helicopter? In my yard? I was confused, but also primed and ready to return the favor when I figured out somebody had made an emergency landing at my farm.

Living in North Carolina, there is a lot of military activity in the airspace around me. AH-64s, CH-47s, V-22s, F-15s. They are all normal sights in and around the farm where I fly out of and live, but they usually sail right on past. So my answer to my neighbor was, “Huh? No. No idea what is going on. What kind of helicopter?”

My neighbor, who is in the special forces at Ft. Bragg said, “I don’t know. I’ve never seen one like it. Some big military thing.” His job in the Army is not in aviation, but he doesn’t have any idea what a big military thing is?! I asked for a picture.

I was about two hours away so I told him to give my number to the crew. A few minutes later I received a call from the crew chief who explained they had made an emergency landing and just needed to make some repairs. They were so sorry to just drop into our property and the message was clear, “Please don’t shoot us. We won’t bother you.”

The crew chief was a bit taken aback; I just gave him the run of my place. But people in aviation have always been kind and generous, and it was time to return the favor. 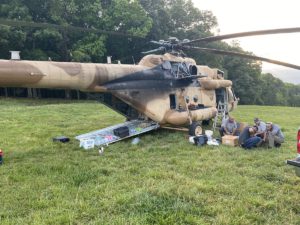 It’s a pilot’s lucky day when you touch down on a grass runway.

When I returned to the farm, I found the crew hard at work removing a hydraulic oil cooler, the offending component that had caused the precautionary landing. I found the pilot and we chatted about what was going on. I explained that he’d landed at the single best place to put down he could have. That I was a pilot and this random cow pasture he was in was actually my runway. He seemed pretty non-plussed till I explained that the pasture where he was sitting had power lines running through it till about a year before when I’d moved them to make the runway. And that all the other areas along his route of flight were either swamp or trees or houses. He turned a touch green when he realized what I was saying. He was in the only safe place he could put down.

When I asked what this helicopter was, they explained it was an MI-17, the export version of another common helicopter in the Soviet Union. These guys were all former military and they were doing some sort of REDACTED for REDACTED. It was all very hush hush. My son wants to fly helicopters in the Army and has been working towards that end for several years now so of course I had him with me to talk to these guys. Just when we were ready to leave and let them work, they explained that the parts they needed were being brought in.

“Driving from where?” It was getting close to dark after all.

At this point, my little farm had turned into a major airport. I called my friends who had small kids interested in aviation and we settled down for our May evening airshow. It didn’t disappoint.

With the parts courier having departed, along with the pilots of our stricken aircraft, we were left with the enlisted crew who would be working on the MI-17 to get it ready to depart in the morning. I put them in my truck and took them to the grocery store to get food and drinks for the night. This was after offering them accommodations that they refused. I dropped them off at their bird with a bottle of NC whiskey from my stash because they were visiting from out of state, so welcome to North Carolina!

About 10pm I heard a long ground run which signaled they had things back together and in the morning, after exchanging pleasantries and a few gifts back and forth, my son settled in to watch them leave, wondering if he’d be doing the same in a few years. In the video below, you can just see him in the grass below the helicopter as it pulls into a hover.

I still receive a lot of kindness of strangers in the world of aviation. And I still read the stories when people’s planes break far from home. But I am pleased to have been the random person in someone else’s story for once. 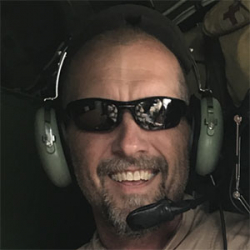 Things that go bump in the dark