Blog - Latest News
You are here: Home1 / Article Archive2 / I was there3 / A rusty pilot returns

From time-to-time over the years, usually late at night when everyone else in the house was asleep, I’d pull my old canvas flight bag out of a closet. I’d sit at my desk, open my logbook, and stare at the last entry.

Dated October 21, 2001, the entry recorded a flight from Murfreesboro Municipal (MBT) to Guntersville, AL (8A1) in my friend and instructor Jim Wilbert’s PA24-250. I’d met Jim a couple of years earlier when he was looking for a writer to collaborate with on a project. We’d become good friends and business partners and I’d fallen in love with his Comanche 250. Months earlier, he’d signed me off on a Flight Review and written my endorsement in High Performance/Complex aircraft. It was one of my proudest moments as a pilot.

Not once during one of those nights did it occur to me that it would be over 19 years before my next logbook entry would be recorded.

Why had I quit flying?

I don’t think I ever meant to. It’s not that I lost interest. I’d kept my AOPA membership current ever since I first joined as a student pilot in 1986. There’s an AOPA sticker in the back window of my car. I was proud to be a pilot, but as the years went by, I talked about it less and less.

I began my primary flight training after leaving corporate life in the mid-eighties. I started publishing crime novels and writing screenplays, bringing in a decent—if sporadic—income. I had a flexible schedule. I was single then, debt-free, and in my early thirties. I’d had a lifelong dream of flying and just decided to go for it. 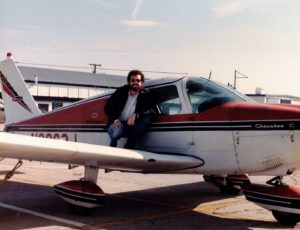 Buying into a Cherokee 180 partnership was a dream come true, but it didn’t last.

I started out on the Piper PA-38, the unfairly maligned Traumahawk, then transitioned to the 152 and 172. In 1987, I had the chance to buy into a partnership with two other guys and became the proud co-owner of a 1968 Cherokee 180. A year or so later, we hit TBO and couldn’t afford the overhaul, so we sold it. While we had it though, I built some good time and it was a great experience.

Later, life got in the way. Divorce and remarriage… Becoming a parent for the first time at 48, then again at 51… Having to give up freelancing for a full-time teaching job… I had a family now and responsibilities. Teaching doesn’t pay well, but it does pay regularly and it came with health insurance. Unfortunately, it also deprived me of the two essential components any pilot needs to fly: time and money.

Then my business partner, friend, and flying mentor, Jim Wilbert, contracted small cell carcinoma of the lung early one spring and was gone by Thanksgiving. This was a hard loss. Jim had over 25,000 hours and was rated to fly everything but the Space Shuttle. He was also one of the funniest people I ever met. After he regaled me with some of his adventures as a younger pilot, I told him he was the only guy I’d ever met who had type ratings in the Mile-High Club. I miss him to this day.

The years seemed to fly by. Teaching and family responsibilities were all-consuming. I barely had time to miss flying, let alone contemplate doing it again.

In 2015, while sitting at my desk one night grading papers, I had a heart attack. A quintuple bypass followed, then a long and painful recovery. It got my attention, though, and I realized if I ever wanted to fly again, I needed to get started. None of us know how much time we have left.

In June, 2018, I got serious. The first hurdle was getting my long-expired Third Class Medical back. Dr. Bruce Hollinger, our local AME, worked with me endlessly and patiently. My cardiologist, Dr. Mark Goldfarb, was patient and supportive as well. There were stress tests, evaluations, and a long list of forms for the FAA. Both doctors filled out more paperwork than I’d ever seen and didn’t charge me a penny for it.

Finally, after going back and forth with Oklahoma City for months, my Third Class Medical was reissued in November, 2018. The FAA, however, backdated the certificate from the date I applied for it, not the date it was approved.

After all that, I had not quite seven months left to get back in the air.

Two months later, I was diagnosed with non-Hodgkin’s lymphoma. What followed was a year of grueling chemotherapy. Once again, flying went on the back burner until I worked through the medical issues.

In January, 2020—after being declared cancer-free a month earlier—the college where I’d been teaching for 25 years announced it was closing, like so many other small private colleges in the last decade. I was suddenly thrown back into the flexible schedule of self-employment. Money was tight, but not as tight as it had been. I decided it was time to take one last shot. It looked like an uphill climb, though.

I had two things going for me. I’d been involved with AOPA’s Rusty Pilot program for years. I’d taken a series of Rusty Pilot webinars and completed a bunch of online courses from the AOPA Air Safety Institute. This is a great place for anyone to start.

By far, though, my biggest worry was the Third Class Medical. Did I have it in me to go through that again? I called AOPA and was directed to a Medical Certification Specialist, who thought I qualified under BasicMed. I started gathering information and compiling paperwork for my primary care provider, who was not familiar with BasicMed and seemed a little tentative at first. 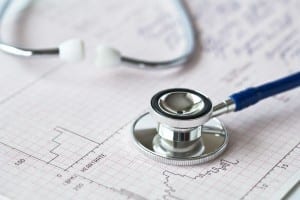 The hardest part of getting airborne again is often the medical—but BasicMed makes it easier.

The oncologist who saved my life, though—Dr. Karl Rogers—is an experienced pilot. During my treatment, we occasionally hangar flew in his offices. He was incredibly supportive and worked with my primary care doctor to get it done. I took the online course, completed the paperwork and procedures, and became medically qualified to fly.

Now all I had to do was learn how to fly again. The only question was: how?

Then I got lucky. I found a flight school based in Smyrna, Tennessee (MQY). I got a good feeling from the school’s name—Flying High Again—and from the fact they were located in the same hangar where I’d taken my primary training 35 years earlier. I got an even better feeling after talking to the company owner, Sean Amos. I told Sean I was probably the rustiest pilot he’d ever seen. He was understanding and supportive and recommended that I take ground school again. Much has changed in nearly twenty years, he said. Ground school was a chunk of change—about the equivalent cost of four hours of dual—but I took his advice and signed up.

It was the smartest flying decision I ever made.

Ground school was taught by Flying High Again’s chief pilot, Aysha Harward, a CFI, CFII, MEI and former Dash 80 first officer for Horizon Airlines. After one conversation, I knew I wanted her as my flight instructor. I needed someone patient and nurturing, but exacting as well.

In Flying High Again, I not only found a group of great instructors and pilots, but a welcoming and supporting community of people who all simply loved aviation. In short order, I felt like I’d become a part of this community. With Sean and Aysha, I felt like I’d found friends.

So what’s changed in the nearly two decades since I’d been in the left seat? How hard was it to come back?

Every pilot’s experience will be different. No two journeys are the same. For me, though, there were a couple of surprises. The first time Aysha and I went up in one of Flying High Again’s Cessna 172s, I marveled at the fact that basic stick-and-rudder skills were still there. I got the airplane off the ground, held altitude and heading (more or less), and got it back on the ground without hurting anyone and the plane could still be flown the next day.

What was hard? The instrument panel. The last 172 I flew had a six-pack of old steampunk analog gauges. I’d never seen a Garmin G5 EFIS, a Garmin 340 audio panel, or most baffling of all, the Garmin GNS 430. I was lost and confused.

I downloaded user manuals, studied and highlighted them, and sat through hours of tutorial videos on YouTube. Finally, it started to sink in.

The second biggest challenge was the nature of the airspace and the volume of traffic. When I took my primary flight training in the mid-eighties out of MQY, the Smyrna airport was a slow-paced, almost backwater operation. I remember it as a non-controlled airport, although it may have had a part-time tower. 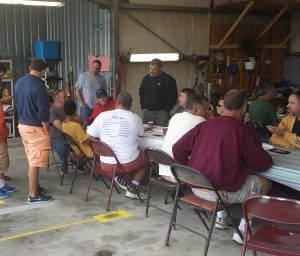 Now MQY is one of the busiest private airports in the nation. On my one-hour drive from West Nashville to Smyrna, I’d pipe the Smyrna tower into my car with the LiveATC app. The closer I got, the higher my anxiety levels rose. During dual instruction with Aysha, we’d find ourselves fourth or fifth in line to take off or land. The amount of chatter over the headset was jarring and disconcerting. I got so rattled once I forgot the phonetic alphabet in the middle of a transmission. Just went completely blank…

Legally, all I needed was a medical and a flight review, which requires an hour of ground and an hour of dual instruction. In the end, I took somewhere around 26 hours of formal ground instruction (not including home study, which I didn’t even keep track of) and 9.7 hours of dual. When we landed the last time and taxied off 32 in Smyrna, Aysha smiled and said “Congratulations.”

So what’s next? I’m still not confident enough to fly passengers. That’s going to take a lot more time. Even when I was flying regularly, I’d been a cautious pilot, always believing the flying adage about old, bold pilots. I’m not going to take chances with anyone else.

I’m still on a budget, so don’t have a ton of cash to just build time. I thought my best bet was to take more dual, maybe earn another endorsement. I’d always wanted to fly taildraggers, so signed on with Ron Dillard at Advanced Tailwheel Training out of Lebanon Municipal airport (M54). I went from flying an IFR-certified 172 with a glass cockpit to a 1974 Bellanca Citabria that’s got about four instruments.

My struggle to fly again and the challenges of the last few years remind me of my favorite Winston Churchill quote: When you’re going through hell, keep going.

This is what I want to say to my fellow rusty pilots. If I can get back in the left seat, anyone can. So get out there, find your tribe, and do it. 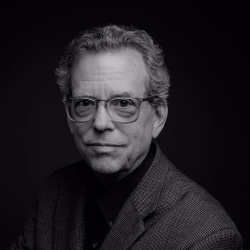 Steven Womack
Steven Womack is an award winning mystery writer, screenwriter, and retired film school professor. He holds a Private Pilot Single Engine Land license and is currently trying to build time and gain proficiency after being away from flying for two decades. He's also working on a tailwheel endorsement. His website is: http://www.StevenWomack.com

When aviation comes to your front yard