As any good story in aviation starts, the rise and fall of Airshow Chattanooga begins with Bob Hoover and a dare. At the turn of 1990, then 28-year-old Morty Lloyd found the legendary WWII pilot and airshow performer’s phone number. On a whim he called, asking if he and his buddies started an airshow in Chattanooga, Tennessee, would he perform. “It was a complete gamble,” Morty, former Director of Airshow Chattanooga, confided in between bites of a taco at a roadside stand where I met him to discuss the rise and demise of the local airshow which graced the East Tennessee skies from 1992 to 2005. 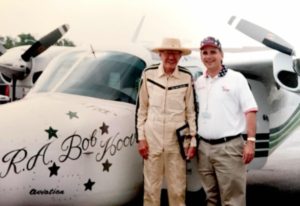 Booking Bob Hoover to perform is a good way to start up an airshow.

However, it wasn’t so far-fetched to “the greatest stick and rudder man who ever lived.” Hoover, a Tennessean himself, called Morty back and spent over an hour explaining to him why Chattanooga, Tennessee, needed an airshow. “Then I got down to work,” Morty said with a grin.

And so began the story of one of the South’s most successful airshows. Airshow Chattanooga’s 13-year run was a wildly successful event bi-annually in Tennessee which regularly brought over 100,000 people to the two-day event. The airshow was twice ranked by the Blue Angels as their number one site to perform. That came as no surprise to Lloyd though: “Each year at our opening meeting our goal was the same: to be the best airshow.”

There is only one way to ensure you’re the best airshow around: secure the US Navy Blue Angels or the US Air Force Thunderbirds. 1996 was the lone year Airshow Chattanooga couldn’t bring a jet team to town and that was due to an internal incident with one of the teams. “They bumped aircraft mid-flight… and had to cancel a week before,” Morty says nonchalantly—as if two fighter jets tapping each other at 300 knots was like a teenager in a fender bender. “But you could see the impact on the show. We still had some of the best performers (Sean D. Tucker, Patty Wagstaff, Bob Hoover, F-14 demo team, civilian warplanes). It didn’t matter. People come to see the Blue Angels.”

In 1990, Morty arrived with the Airshow Chattanooga contingent at the International Council of Airshows annual meeting in Las Vegas for the performer’s selection. Out of almost 350 airshows only 12 would get selected to host the Blues or the T-birds. “Most people there hadn’t even heard of Chattanooga,” Morty admits. “I told Blue Angel No. 7 about our proposal and his response was ‘Chatta-what?’”

But Morty had an ace in the hole. “It certainly didn’t hurt to have mom on the Armed Services Committee,” he said with a wink. Democratic Congresswoman Marylin Llyod represented the 3rd District of Tennessee for 20 years, and most importantly to the future success of Airshow Chattanooga, she was Morty’s mother. In the airshow’s first year it was announced that the Blue Angels were coming to the Scenic City. “We never wanted one of the jet teams to regret taking a chance on us. We would always receive their two-inch thick support manual and we would always try and go above and beyond their demands.” 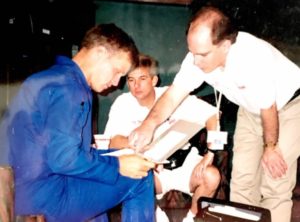 Planning for a jet team like the Blue Angels takes serious work.

Demands is an understatement when it comes to working with the military jet teams. They own the airfield and the airspace and that is no joke. Morty rattled off stories of the dramatics of working with a jet team. “They require a sterile airshow box. Meaning no movement whatsoever. One year, Blue Angel No. 7 was doing a clearing flight of the airshow box and he saw a train creeping in the final ten-foot corner of the box. They called me on Friday and said they that they would head back to Pensacola unless that train was gone.”

Morty then began a series of phone calls with CSX which ended in a midnight conversation with the VP of Railroad Operations, who finally relented to stopping the train. In a town made famous by the Chattanooga Choo Choo, the rails would come to a halt for two hours to give way to the skies. “Despite their stringent demands, the Blues were always class acts, never prima donnas,” Mike Brown, Blue Angel Liaison for Airshow Chattanooga, remarked.

Ironically, getting the railroad to stop was easier than closing two holes of the Brainerd Golf Club. After stationing an armed guard on the western most par four and a bargaining a few VIP passes to some inconvenienced golfers, “we finally got those two holes closed for two hours.”

Morty recalled the wildest stories he ever had. In the history of Airshow Chattanooga there was only one fatality… that poor horse. Apparently, after a jet team performed an inadvertent sonic boom (or as the one of the bosses of the jet team described it, “a mere sonic wave”), it resulted in startling a horse to death. “We had to buy a new horse,” Morty said, throwing his hands up. “Despite that, I’m proud to say we never had an accident or a human fatality at Airshow Chattanooga.”

Just as most aircraft crashes are not from a single major malfunction, but the result of a chain of small miscalculations, the end of Airshow Chattanooga was a growing snowball of difficulties which resulted in its cancellation after the 2005 show. First, the main sponsor pulled out. Erlanger’s T.C. Thompson Children’s Hospital had been the premier sponsor for the airshow’s entire life. It wasn’t because the show wasn’t generating a profit. The airshow raised almost $235,000 for the Children’s Hospital in the last show. “Leadership changed and they went another direction and that’s all the explanation we got,” Morty says. 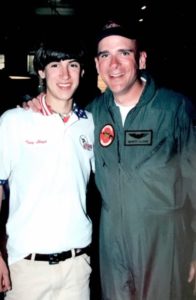 Putting on a big airshow is usually a family affair, as it was for Morty and his son.

However, the real death knell of the airshow was the very thing airshows are designed to promote: the growth of aviation and the local community. The Chattanooga Metropolitan Airport, along with the city, experienced a massive transformation in the 2000s. The addition of Mayor Bob Corker’s Tennessee Riverpark, the Tennessee Aquarium, more jobs, and the overcrowding of Hartsfield-Jackson (Atlanta’s airport nearly 90 miles south) turned “Chatta-what” into a tourist and transportation hub of the South once more. The population grew by more than 30,000 in ten years and the Chattanooga Metropolitan Airport went from processing 230,044 passengers in 2003 to 550,553 travelers in 2019. There became no way to work around the airlines and stop all movement within an airshow box which now found itself in the heart a growing city.

“I wouldn’t have had it any other way,” Morty says. “It’s great that the economy, the community, and the air traffic of Chattanooga is growing. It’s just a somewhat sad byproduct of a growing city that the airshow couldn’t last.” For those hoping for a possible return of Airshow Chattanooga, Morty’s answer is simple: “never.” The establishment of a corporate air center on the western side of the airport in 2008 fully encroached upon the airshow box and thus sealed the fate of the airshow’s possible return.

Despite that, the memory of Chattanooga’s airshow lives on. Our waitress overhearing our talk of the airshow asked the question many natives ask when hearing about it: “is it coming back?” After hearing no, she then proceeded to tell us how she and her husband volunteered to help with the pyrotechnics for the ’92 and ’94 shows. “He was a Vietnam veteran, and you could see on his face what helping meant to him.” That’s what an airshow does: it brings people together to commemorate innovation, exploration, and pay tribute to service. In an age of 737 Max crashes and over invasive security checkpoints, the local airshow is the one place the aviation community can put forth its best face to the non-pilot public to show its important role of commerce in the community. No place else does civilian, commercial, and military aviation work together better than your regional airshow.

As for Morty, he enjoyed his time with the airshow, but is glad to not have to deal with the stress. “I had a full head of hair before the airshow,” Morty laughingly remarks pointing to his smooth head. When asked the most rewarding part of being director of the South’s best airshow? “That’s easy; the people.” That’s an answer anyone in aviation knows is true. No matter how fast the F-16s become or how many loops Sean D. Tucker can wring out, the one thing that makes aviation as great as it is, are the people involved with it.

Base turn over the trees

Friday Photo: deviating around a forest fire
Scroll to top