Blog - Latest News
You are here: Home1 / Article Archive2 / I was there3 / Kids in the cockpit: be sterile and not heard?

This past Christmas break allowed my father and me to catch up on one of our favorite pastimes: watching the Smithsonian Channel’s Air Disasters. In this episode, the NTSB was investigating the 2006 crash of Delta Connection flight 5191, which crashed on takeoff out of Lexington’s Blue Grass Airport after the pilots lined up on the wrong (and much shorter) runway.

The cause of the improper takeoff was deemed to be the pilots’ distraction by a lack of “sterile cockpit” during taxi to the threshold. Sterile cockpit refers to the type of communication between pilot and first officer during critical phases of flight. This conversation is to be limited to only pertinent pieces of information about the flight. It’s strictly held to in commercial aviation, and in general aviation circles it’s still often asserted as good practice.

As a talkative toddler who grew up in an aviation family, I became very familiar with the term sterile cockpit. Sterile cockpit was a kind way for my father to tell me to “shut up.” As I got older, I understood its importance because my dad was a single pilot operator and had a lot to focus on. We even started using the term outside the cockpit when somebody was busy with another important task like being on the phone or doing homework: “I need a sterile cockpit for 5 min.” The Air Disasters episode reminded me of a time when the exact opposite situation got us in trouble. 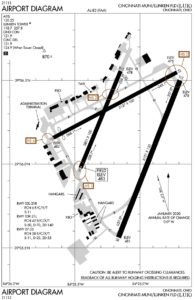 There are a lot of taxiways to remember on that diagram.

When I was 12 my father and I took our Cessna 182 to Cincinnati for a Reds game. The next day as we prepared to leave Lunken Airport (LUK), an unfamiliar airport to my father, I sat in the right seat as the ground controller gave us one of those taxi instructions which seemed to contain every letter in the English alphabet and a few letters in other languages. I caught most of it, and remained quiet as my father asked for progressives. The ground controller was frustratingly busy and half-heartedly agreed.

The one part of the instruction I did make out clearly was, “hold short at alpha.” I watched my father sweat in the hot Ohio summer sun trying to go through every pre-flight checklist and diagram that Garmin had in the primary flight display. I kept quiet because I knew from years of flying with him that when dad gets task saturated, he needs a sterile cockpit. In his fight to make the Garmin work, I saw us slowly approach the yellow and black hold short line.

He knows, I thought to myself, not feeling the need to fill Dad’s head with unnecessary conversation. Dad wasn’t oblivious to the line. He saw it and checked both sides of the intersecting taxiway and runway to make sure nobody was coming, but it became apparent he wasn’t slowing to a stop. I began to have an internal conversation: maybe I heard the instruction wrong; this is alpha right? But I kept quiet—sterile cockpit—he knows what he is doing, I’m a passenger.

Then it came: “CESSNA ON ALPHA HOLD SHORT! THAT’S WHERE I TOLD YOU TO STOP! WERE YOU NOT LISTENING?!” I don’t exactly remember what followed but I do remember it wasn’t the warmest conversation I’d overheard between a controller and my father. After getting put at the end of the taxi order, we finally made it out of Cincinnati, thankful for no phone number to call. Dad learned a hard lesson about task management, but I learned something too.

It was time to ask to take a more active role in the cockpit. Sterile cockpit was certainly important, but maybe it shouldn’t mean “no talking whatsoever.” I was of the age and flight experience where I knew what was going on and shouldn’t have just sat there like a deer. If I had put a voice behind any of those internal concerns it could have really helped my father. It was time to be slightly more than a mere passenger. Afterwards I began asking dad for more minor responsibilities: traffic spotting, pulling up charts, punching in frequency changes, even eventually working my way up to talking to the controller during a hand-off. It’s those small tasks that I began performing which ultimately kept me interested in taking flight lessons of my own and made it slightly easier once I did start taking lessons four years later. 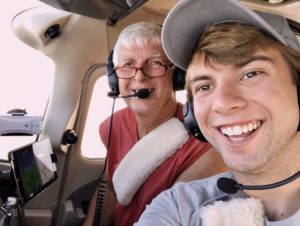 Flying with family is great, but everyone needs to be part of the crew.

That lesson learned on taxiway alpha at Lunken Airport is one that I haven’t forgotten as I have become a pilot. It’s OK to involve your right-seater, up to a point. In my pre-flight conversations I try to explain that as a passenger you aren’t just a passive observer. A sterile cockpit is important, but if I’m about to hit a deer or a bird that I don’t see, you need to speak up. I try and give them minor tasks such as looking for traffic and pointing it out to me when entering busy airspace, or holding a checklist. It’s not just practically good cockpit management, but you never know what could spark an interest in aviation.

Of course, if the passenger is another pilot these duties can be more robust. However, a line is always drawn between being helpful and being pilot in command. There are plenty of NTSB reports and Air Disasters sagas on how that can go wrong, and I have found that most of the time passengers don’t even want anything remotely close to that level of responsibility. They want to be a passenger and that’s it. I always encourage any passenger: “if you have any question… ‘what’s this button do? what’s that noise? what’s this number mean?’… ask it. I should know the answer, and if I don’t you will make me a better pilot.”

To those who fly with younger kids, I know sometimes you wish you could put Saran Wrap and a muzzle on them and have them repeat internally, “I will not touch anything” during the entire flight, but many times your young teen is smarter and more intuitive than you might think. Involving them in the cockpit process in small, non-critical ways could be an important step in passing the love of aviation to the next generation. Who knows? Maybe one day you’ll be in the right seat and they’ll be the ones telling you, “don’t touch anything, sterile cockpit.”

How I became friends with ATC