Blog - Latest News
You are here: Home1 / Article Archive2 / I was there3 / Flying helicopters in the Indo-Pakistani War of 1971 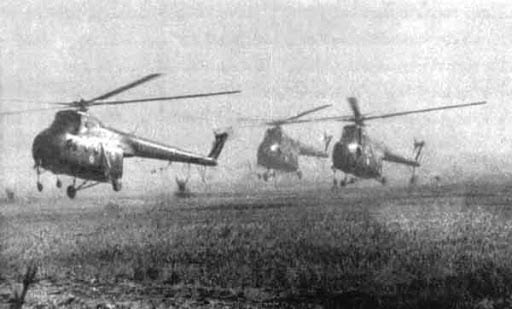 On December 3, 1971, India declared war against Pakistan, while I was posted to the 110th Helicopter Unit at Kumbhigram, India. Our unit, along with the 111th and 105th HU, were located at Agartala Airport, in East India—we had eight helicopters in total. I was the flight commander, so I was in charge of running the show.

On December 7, we flew all our helicopters to a field about 20 miles from Agartala. General Sagat Singh briefed us on what the plans were for the day and then took us along in a helicopter to show us the field near Slyhet where he wanted us to drop the army that day. After the briefing we got all the helicopters refuelled and ready from 0900 hours; we were waiting for the brigade to appear. The army had been held up by the enemy so they only stated appearing at 1445 hours.

I had allocated the crews for each helicopter and each one of us had a number. I was number one, the second helicopter was number two, and so on. The idea was that we would get airborne as soon as we had our load. Slyhet helipad was 20 minutes flying time from where we were and was a big field, perhaps 50 acres. 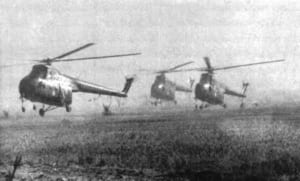 Moving large numbers of soldiers by helicopter requires planning, teamwork, and some luck.

We had enough fuel to do three trips each, but by the time I was going for my third trip it was already dark. In addition, the Pakistani army had seen the helicopters and started surrounding the field we were landing in. They were firing at us as we came in to land. On my third flight I could see hundreds of tracer bullets coming towards us from all directions. Obviously I couldn’t count all the bullets but we could see a lot of tracer bullets. Amazingly, not one bullet hit us. I warned all others pilots to reduce the time on the ground to a minimum. We all finished our three trips and shut down for fuel at our base. All of us checked our helicopters and not even one bullet had hit any helicopter. It was now around 1730 hours and was dark.

While we were getting ready to start flying again, Gp Capt Chanan Singh, who was in charge of the Air Force side of the operation in our sector, said that we couldn’t fly at night and that we would start flying again the next morning. That really upset the army—they had not planned anything about who was going first and with what equipment. They were not even sure of what or who had gone so far. All the helicopters had been filled up as the soldiers arrived and the army had the idea that we would keep flying until everything and everyone had been moved.

There was a big discussion between the brigadier and the group captain. Eventually, after nearly five hours, it was decided that one helicopter would go and if it came back the others would be sent.

Gp. Capt. Chanan Singh asked me to get a crew for the flight. I came to our rest room and asked for a volunteer to join me. Every one of my forty pilots wanted to come. I picked Flying Officer Kanth Reddy. We filled the helicopter with essential radios and other equipment, along with the soldiers. For our protection we had a .38 revolver and a lungi, which is a piece of cloth you wrap around your waist (the Bengalis wear it). In case we were forced to land, we were to pretend we were Bengalis! We didn’t know a word of Bengali.

We always carried a flight engineer, so that he could do all the handling on the ground and our time on the ground was kept to a minimum.

I loaded up the helicopter—the army made sure they were sending all the essential equipment this time. We took off at around midnight, and it was pitch dark. Our only navigational aid was a compass. We set course and as we got closer we heard our air force liaison officer, who had gone along with the army, on his handheld radio. He told us that it was all quiet and that he would light a fire for us so that we would know where to land.

As the fire was lit, the entire Pakistan army started shooting at that fire. We could see the tracer bullets, hundreds of them. The poor soldier who lit the fire got hit on his thumb. He was lucky he didn’t get killed.

We landed and dropped everything we had as fast as we could, then picked up the soldier who had been hit and got airborne in a second. After all the excitement of bullets, I asked my flight engineer to have a look at the helicopter and see if we had been hit. He checked and told us not one bullet had hit us… amazing. On my way back, I radioed the base to get all the helicopters ready so that we could continue flying right through the night.

I landed back, picked up the next load and went and dropped them. We then came back and picked the third load before the rest of the helicopters got ready. On the way back from our third trip, we noticed that our fuel gauge was showing zero fuel. We knew we had taken off with enough fuel, so either we had a leak or the gauge was not working. Since our engine was still running, we obviously had fuel going to the engine. We had our fingers crossed, and were praying to whoever is up there to get us back to base. 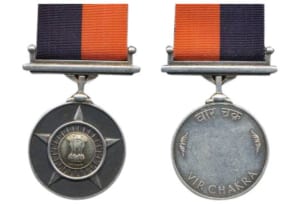 “Awarded for acts of conspicuous gallantry in the presence of the enemy.”

We were lucky and we got back to base safely. At base we discover that the cable to the fuel gauge had been hit. This was mended and then we continued flying with the rest of the helicopters right through the night until we had dropped the entire brigade at Slyhet.

For my above action, Gp. Capt. Channan Singh sent my name for a Vir Chakra, and I had received the notification within a few days that I had been awarded it.

Two days later, I went with Gen. Sagat Singh to scout a helipad we were going to use that night, in an Allouette helicopter. There were six of us in that helicopter and on our way back we heard phut, phut noise. Someone was firing at us and bullets were going through the helicopter. The pilot was hit, so the co-pilot took over and climbed quickly. We returned to base, and on landing we discovered there were 38 bullet holes in that helicopter. Only one person was hurt: somebody was keeping an eye on us that day. We were very lucky.

During the operations against Pakistan in Dec 1971, Flt Lt Pushp Kumar Vaid was serving with a helicopter unit deployed in the Eastern Sector. On one occasion it was decided to transport an infantry element to the sector by air. Flt Lt Pushp Kumar Vaid, knowing fully well that the helicopter landing area would not be adequately lit and that he would come under heavy enemy fire on landing, volunteered to undertake this mission, and successfully completed the task. Subsequently, he flew 34 more hazardous missions deep behind the enemy lines. Throughout, Flt Lt Pushp Kumar Vaid displayed gallantry, professional skill and devotion to duty of high order. Pushp Vaid
Pushp Vaid flew helicopters for 44 years and logged over 17500 hours in helicopters. His career began in the Indian Air Force in 1963, where he accumulated have over 3000 hours on the MI-4 Russian helicopter, mostly flying in the Himalayas. He left Indian Air Force in 1974 and migrated to the UK and joined British Airways helicopters, where he logged over 2500 hours in the Chinook. In 1993, he left British Airways helicopters and joined a Dutch company called Shriener helicopters, operating out of Nigeria. He now enjoys golf, cooking, and yoga.

Sustainable aviation and the trouble with high performance airplanes