General aviation’s less-than-stellar environmental record has always been the elephant in the pilot’s lounge: everybody knows it’s there, but nobody wants to talk about it. While the industry has repeatedly fought and won the battle against air traffic control privatization, it has never really admitted there’s a battle to be fought when it comes to emissions. Perhaps surprisingly, that strategy of playing dumb has worked remarkably well over the years—at a time when many large companies are announcing ever more dramatic environmental pledges, GA airplanes continue to burn leaded avgas like they always have.

Some of that is due to size. The entire aviation world, from trans-Atlantic airlines to small flight schools, represents less than two percent of worldwide greenhouse emissions, far behind other sectors like road transport or steel production. And at least the airlines have made significant progress over the last three decades: per-passenger emissions have dropped by half, offsetting some of the strong growth in international air travel.

Unfortunately, that’s not enough anymore. For many environmental activists, politicians, and even public company CEOs, the goal is not to limit the damage but to achieve net zero emissions. This campaign is starting to achieve real results: the European Union is expected to ban internal combustion engines in new cars by 2035. So whether you think climate change is an existential threat or a hoax doesn’t really matter—it is a serious issue for the aviation industry, at least from a public relations standpoint. And right now we have an image problem. 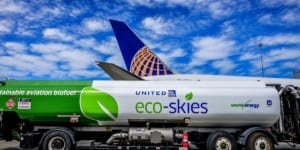 Get ready for the “greenwashing” of the airline world.

Trade groups are starting to notice: at the recent European Business Aviation Conference, hosted by NBAA, sustainable aviation was topic number one. Erik Lindbergh delivered a keynote of sorts, promoting his vision for an environmentally aware aviation industry, and he has some serious support behind his project. Many other speakers offered a similar message.

A plan for jets

One reason for all the excitement is that the turbine world finally has a story to tell: Sustainable Aviation Fuel (SAF). This uses materials like cooking oil and wood waste to reduce total carbon emissions by up to 80% compared to traditional Jet A. SAF has received a surge of investment recently: energy giant BP is ramping up production, engine maker Williams has flight tested its FJ44 engine on 100% SAF, and FBO chain Signature has made it available at a growing number of locations. Even United Airlines, in announcing its deal with Boom Supersonic, felt compelled to mention it is “The world’s first purchase agreement for net-zero carbon supersonic aircraft.” Such a sentence would have been completely nonsensical just a few years ago.

SAF is gaining fans mostly because there are no other realistic alternatives for airlines and business jets: there simply aren’t any powerplants that can provide the power and efficiency of a jet engine. For all the artists’ renderings on tech websites, Delta isn’t going to fly 300 passengers to Europe with batteries and solar panels. SAF is also (hopefully) a drop-in replacement for Jet A, so it doesn’t require a completely new supply chain.

As exciting as this sounds to many airline PR departments, it’s important to keep some perspective. IATA, the global airline organization, is hoping to use 26 million gallons of SAF in 2021. This sounds impressive but accounts for less than 0.5% of global jet fuel use. The price will also undoubtedly be higher than Jet A (some are lobbying for a tax break to help). Still, there is at least a plan with real targets and real airlines using the new fuel.

What about light airplanes?

At the other end of the aviation spectrum, electric motors are getting most of the attention. While the hype has consistently run ahead of reality, look past the Silicon Valley “flying car” startups and you’ll find a few companies making real progress with electric airplanes, notably Bye Aerospace and Pipistrel. Both are focused on a realistic goal: building a traditional two-seat airplane that can fly a one-hour training flight (no eVTOL science fiction here). That mission seems to be achievable with current battery and motor technology, and I expect to see some larger flight schools adopt these airplanes in the next five years. 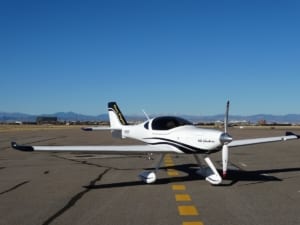 Can this technology scale up to 6-seat airplanes?

That means flight schools, business jets, and airlines all have a plan to tackle emissions, at least on paper. But there’s one category of airplane that is conspicuously absent from this list: high performance piston airplanes, the ones with four to six seats that cruise at 150+ knots and can fly 300+ nautical miles. These may be fewer in number than training airplanes, but they fly many more hours per year and fulfill some very important jobs in aviation.

What’s a Cirrus, Bonanza, or Seneca owner to do? There are plenty of possible scenarios, but none of them look very promising right now:

Unfortunately none of these ideas have the easy appeal of SAF, which requires neither new engines nor new ground infrastructure. Most of the ideas above require huge certification efforts, and even if one of these ideas gets certified it will take many years before the typical GA pilot sees one at their airport. The average piston airplane is over 40 years old, so replacing the entire fleet is a truly daunting task (the car market is not a fair comparison here). Maybe someone will make a business out of re-engining old Cessnas, but such an upgrade would probably cost more than the airplane itself. 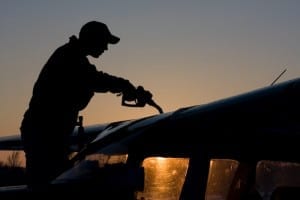 Nothing to see here…

In the meantime, the chances of finding an unleaded avgas solution will only get worse. The FAA’s Piston Aviation Fuels Initiative has been a disaster so far, and it shouldn’t be surprising—energy companies have little incentive to develop a new fuel, since avgas accounts for less than 0.1% of transportation fuel consumption in the US. If electric airplanes become a reality, that number will get even smaller.

Worse yet, the current business climate is openly hostile to new fossil fuel investment. ExxonMobil recently lost a high profile shareholder vote with activist investors who want the oil giant to take climate change much more seriously. BP and Shell—oil and gas companies, mind you—are targeting net-zero emissions by 2050. For an executive at a public energy company, spending time and money on unleaded avgas is a laughably bad idea. Not surprisingly, Shell’s unleaded avgas project looks dead and the latest update from Phillips suggests it is in hospice care. Wouldn’t it be ironic if the greening of aviation makes unleaded avgas harder to achieve?

It appears some parts of GA will be caught in the middle. Expect to see airlines boasting about their carbon neutrality, and large flight schools showing off their “zero emission” trainers. If the typical high performance piston airplane is still burning leaded avgas, we won’t fly under the activists’ radar for long. Even if we do, our dependance on a single supplier for lead additive puts us in a precarious situation.

Does that mean every Bonanza will be grounded? Hardly. I’m a strong believer in the “muddling through” theory of history: inertia is a powerful force, so even when it feels like a trend can’t continue, it often does. General aviation can and will survive as a niche activity, with an environmental exemption in much the same way antique cars can avoid emissions testing—”we’re too small to matter!” But that’s not a very inspirational vision. Are we willing to admit that GA will always be a small group of antique airplanes? Shouldn’t we dream bigger?