Blog - Latest News
You are here: Home1 / Article Archive2 / I was there3 / Coming Full Circle—Finding Your True Calling

I was one of those lucky kids who grew up with a “flying dad.” Just about every Sunday afternoon, you could find the two of us hanging out at the Mattituck Airport, located on the eastern end of Long Island. Back in those days (for me the weekly forays began in 1960), if Dad wasn’t inside the FBO shooting the breeze with his buddies, you could generally find us flying around the East End in a rented 1946 Aeronca 7AC Champ, with me in the back seat. The whole flying experience was quite intriguing, and the proverbial seeds had thus been planted. Before long, flying became about as normal an activity for me growing up as going to the ballpark was for other kids my age. 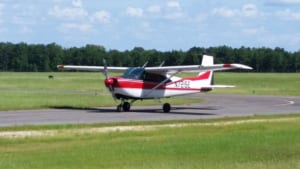 Sometimes the best way to build a career in aviation is to start flying—in whatever airplane you have access to.

When I made the decision to enlist in the Marine Corps in 1973, the aviation journey just continued onward. My first solo happened in a Schweizer SGS 2-33 while stationed in the hot desert sands of Twentynine Palms, California. I was only 18 at the time and thought the whole concept of flying without an engine to be very cool indeed. Orders “back East” found me scratching that flying itch at Marine Corps Base Quantico’s Aero Club. I easily made the transition to powered planes and subsequently earned my Private Pilot certificate in early 1976.

After flying for a few years and even starting to train for both Commercial and Instrument privileges, I ended up being bitten by a different kind of bug: love. For the next 21 years flying simply became a “thing of the past,” an interesting conversational topic. Between the demands of marriage, work, raising kids, and trying to make ends meet, there simply wasn’t any time or money for flying—so I wrote it off. But as is true with so many other things in life, circumstances change. The marriage ultimately took a hard turn south, and after 21 years I was faced with the reality of starting all over again.

Very fortunately, the woman I should have married the first time around happened along, and thus started a pattern of going on impromptu dates at a couple of local general aviation airports in Virginia’s Hampton Roads region, kickstarting the second chapter of a story that began a long time ago. It’s a story which in the aftermath I’ve heard numerous times since from others. Now at age 65, I’d like to share a few highlights of that second chapter, with the hope that someone out there might be encouraged to perhaps pursue their dream and find their true calling, without dealing with all the drama and seeds of indecision.

Everything started out so quickly. Following a five hour flight review, there I was, sitting behind the yoke of a Cessna 172 again. This was late 1999, and my flight instructor at the time implored me to start preparing for a career in aviation. But what kind of career? I only had about 300 hours in my logbook. In those pre-9/11 days, aviation was booming but I needed to finish up the Commercial, Instrument, and Multiengine ratings. I did have a good paying job, so the cost of acquiring all of those ratings wasn’t too big a deal.

By the time I had all of the required ratings complete, 9/11 happened and everything changed. Flying jobs for a low-timer were just about non-existent. If you were fortunate enough to land one (through a good connection), it was very likely to be a super low paying job or perhaps even no pay! Back then “indentured servitude” was common practice. The struggle I had was seeing my way clear of walking away from a job that paid exceptionally well to one that paid next to nothing. I reassured myself that “I’d be flying,” but in the end I just couldn’t bring myself to do it. Not only that, I didn’t want to drag my new wife through what would surely become a financial quagmire.

The solution ended up being a simple one. We purchased a 1959 Cessna 182B, and for the next 16 years we flew “Old Girl” all over the country. I added a bunch of hours and practical experience to my logbook. It ended up serving me well down the road. This was my way of having my cake and eating it too.

Somewhere in that time period I became obsessed with the notion of doing something useful with aviation. I got involved with Angel Flight and the Young Eagles program but something still was missing. It occurred to me that becoming a CFI might very well fit that bill. After procrastinating for several years, I finally got it done in July of 2009 (my new part time career was more of an undertaking than what I figured). By then I had nearly 1200 hours or so in my logbook and I really thought quite highly of myself. Why with that kind of time it should be easy finding a part time gig. 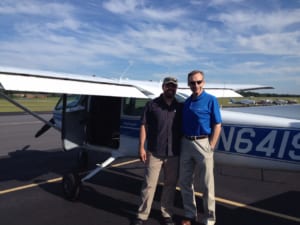 The rewards of flight instructing go far beyond the paycheck.

It took some doing but finally I found my first CFI job, or should I say it found me. Being the “super salesperson” that I was, the call came one day from a local flight school I had previously canvassed. Their regular CFIs all found employment elsewhere and a replacement was desperately needed. I took the job, and as the saying goes, let the learning begin. Indeed, I learned quite a bit from that first flight instructing job—enough to know that I truly had a lot more to learn.

Since that first paying gig as a CFI I’ve moved a couple more times, first to South Carolina and then to Colorado. With those moves came more opportunities in aviation. I had a couple of misses, but looking back now I’d say the hits outnumbered the misses.

In reviewing the path I took I came away with a few notable observations:

Here’s what else I learned: there’s no greater path to joy and satisfaction than being able to utilize your gift and passion in terms of helping others. Specifically, I’m referring to becoming a professional flight instructor. I had a lot of false starts and took a number of unnecessary detours. It wasn’t until I was finally able to retire from a profession that paid the bills and allowed me to save enough for the life I really wanted that I found my true calling. It took a long time to get there, but I did have plenty of fun along the way. The 182 belongs to someone else now and I get paid to fly other people’s airplanes and teach folks how to fly, all without worrying about losing my shirt in the process. How good is that?