To file, or not to file, that is the question… This familiar soliloquy with a play on the verb “file” is something that has piqued my interest for a number of years now. I once had a hangar neighbor who oftentimes would say that “he filed” to such and such a place. His intent was to inform me that he had ventured out into the world of “hard IFR.” Because I was a newly minted instrument pilot at the time, that reverential statement generally left me somewhat awestruck.

Beset with that indelible image of IFR adventure, I too began “filing” shortly thereafter. Ahhh, the pure joy of filling IFR was now realized, albeit not into the “hard stuff;” that came later. Truth be known however, it didn’t take me long to realize that when the DPE on my instrument checkride handed me my temporary certificate followed by the statement, “this could be your death certificate,” he really wasn’t kidding around. So, I moved along minding my Ps and Qs, never missing an opportunity to file, even in severe CAVU. 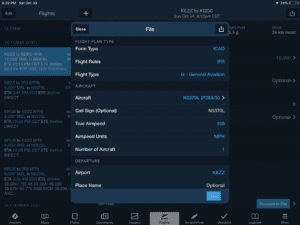 New tools make it easier to file—should you do it more often?

Given the fact it’s not always the quickest way to get from Point A to Point B, it does add that extra layer of safety and protection while enroute on a cross country flight. It also keeps you “legal” should you venture inside one of those puffy white obstructions in the sky, along with multiple options for extrication, should that need arise.

For those of you who have been there and done that you also know pre-planning is absolutely essential. Weather, weather, and more weather—it’s all part of the game. Not to be remiss, time doesn’t permit mentioning all the other finer points and details. One just wouldn’t think of leaving home without it. Period.

In tightly knit social groups such as can be found in GA, there’s not too much that remains a secret for very long. As time went by, I happened to take notice that some of my VFR-only buddies kind of eschewed the notion of filing a VFR flight plan. “What in the heck is up with that?” I asked.

“It’s a pain in the derriere,” they’d reply. “If you pick up Flight Following why bother with a flight plan?” Someone once made this prophetic statement: “filing a flight plan is like telling someone you’re going on a long hike in the woods. Getting Flight Following is tantamount to taking a buddy along.” So who’s right? Why not do both?

When you boil it all down to its simplest form, you can easily find the answer. It’s not a legal requirement to file IFR or VFR on a CAVU day, but if your preflight planning reveals that you will be unable to maintain minimum cloud separation requirements, you must file IFR if so rated. Otherwise if you’re only VFR you stay home or plan a different route. Is “get-there-itis” the reason we see so many examples of continued flight from VFR into IMC mishaps?

Why don’t more pilots file a VFR flight plan on CAVU days when IFR pilots do? I wonder if some of us, myself included, are perhaps haunted by the notion of, “if we forget to close it we’ve got some tall ‘splainin’ to do.” Never mind the cost of that practice SAR exercise. I’m not exactly sure, but it’s the only reasonable explanation I can come up with. Given how simple and painless Leidos has made this process (see more on this below), it certainly does beg the question, why not?

When I started working full time as a flight instructor, it became apparent that many student pilots were uncomfortable with the whole filing thing. I don’t think most ground schools do such a great job teaching how to do this. But alas, along comes the knights in shining armor: Leidos (1800wxbrief), ForeFlight, FlightPlan.com, FlyQ EFB, and many more. My personal favorites are Leidos and ForeFlight. One can virtually go through the entire process without any personal communication or intervention whatsoever. Those who are reticent and reluctant to speak to a briefer are the ones that love that option.

That said, I do literally require my students to dial in and make that call to a briefer for their first dual cross country flight. Then, being the meanie I am, I have them open and close that first one in the air using Flight Service. Simply put, it is my responsibility as a CFI to show them every available option, the same as planning that flight using paper charts and the E6B is.

Once we get through that, I’ll present other options to them, such as closing their VFR flight plan by calling 1800wxbrief on the ground, while remembering (to my earlier point) not to forget to do so. I should also mention that it is absolutely necessary to establish an online account with Leidos and set up a personal profile along with that of the training aircraft. Subsequent VFR flight plans then become very simple once the system recognizes you.

Leidos has made the process of opening and closing flight plans a lot easier.

I have to say that Leidos has literally transformed the flight planning/filing process into a quick and easy experience. When filing using your cellular device you will receive a text message and an email from Leidos the moment you hit the file button and the flight plan has been accepted. Once you reach that point, opening and closing the VFR flight plan can be accomplished in just a few seconds using your cell phone or tablet right inside the airplane. It just couldn’t get any simpler, and both my students and I love the straightforward and streamlined process.

ForeFlight has made filing IFR a simple process too. Perhaps it’s the overall visibility of the iPad, combined with the feature-rich flexibility of ForeFlight that allows for such user friendliness, but I have to submit that I find the briefing aspect somewhat more digestible and concise as opposed to the previously mentioned platform. There again, the way I see it, it’s a matter of personal preference. John Zimmerman wrote a great piece about the finer points of using ForeFlight on iPad Pilot News—I’d highly recommend that all users of ForeFlight check it out, it’s a very worthwhile read.

Bottom line: whether you are a VFR or IFR type, technology has really come to the rescue, and irrespective of your personal preference (self briefing, or calling a briefer), it’s way better than it used to be and that brings a smile to my face!

As for that “touch of humility,” I would really like to share the following story with y’all. A few months ago, while enroute from Cameron, Missouri (EZZ), to Dodge City, Kansas (DDC), I heard a most unlikely exchange between a controller from Kansas City Center and a pilot on his radar screen. On the air, in the presence of God and every other pilot on that frequency, I heard that controller openly apologize for his so called “rude behavior” while speaking to that pilot on an earlier landline call. He literally took at least a full minute to express his remorse for whatever misdeed he felt he had committed. I was totally in awe of this controller’s absolute strength of character in making that open air act of contrition. If left me feeling like, “wow, perhaps there still is some hope.”

To whoever you are sir, if you happen to be reading this, my hat is definitely off to you. Thank you for sharing that great lesson in humility! Humanity became a better place on that day and time.

A spur of the moment decision, and a missed NOTAM

First flights, for young and old
Scroll to top