Blog - Latest News
You are here: Home1 / Article Archive2 / I Can't Believe I Did That3 / A spur of the moment decision, and a missed NOTAM

Years ago, as a low-time, VFR-only pilot, flying a borrowed Cherokee 140, I invited a coworker along for a flight from Concord, New Hampshire (CON), to Carrabassett, Maine. There is a small, unattended field there, Sugarloaf Regional (B21), into which I had flown before. Another coworker had a camp in the Bigelow Preserve, and we hoped to overfly his camp and take him for a scenic flight over the Flagstaff Lake area.

As the day of the planned flight drew nearer, I could see that the weather might not cooperate, with a scattered cloud layer forecast over that area but with good conditions south and west. On the day of the flight, I decided to launch and see what developed, knowing that I would be above the clouds with plenty of fuel to get to home to CAVU conditions.

Sure enough, as we got closer to Sugarloaf, the cloud layer was filling in below us, and even though there might have been a chance to get through one of the big holes, I was not about to play around like that, especially with the terrain in that area. I was, and still am, a very conservative and safety-conscious pilot (though the rest of the story may suggest otherwise).

We flew around a bit, and then headed for home, deviating a little to the east to avoid some clouds at our altitude. Not wanting the day to be a disappointment for my coworker, I remembered a small airport into which I had previously flown, Limington-Harmon (63B), which has a nice little restaurant on the field. I suggested we stop there for a late breakfast.

Ten miles out I made my first call on the CTAF, followed by another call five miles out. I didn’t hear anyone else on frequency, which wasn’t too odd, as this was a fairly quiet airport. But I double-checked the frequency and made sure my radio was functioning. 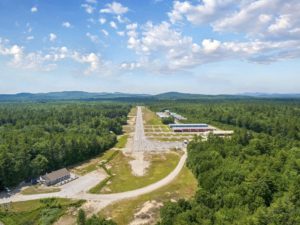 We entered the traffic pattern, and on left downwind to runway 29 we saw an area in the grass at the edge of the woods surrounded by yellow caution tape. Huh… wonder what that’s about. We landed and back-taxied, and could now see it was a wrecked plane that was cordoned off. No one around, just the plane. Curious.

We parked down at the approach end of the runway and went into the restaurant. We were sitting at the counter enjoying our breakfast, and the woman serving us was chatting us up. She asked where we were from, and we told her that we had flown in from Concord.

“You landed here?” she said. “The airport is closed! There was an accident here this morning and the FAA is on their way!”

Panic. A barrage of thoughts bombarded my brain all at once: What do I do? What’s going to happen to me? Will I lose my certificate? Maybe I can quickly depart, and no one will know (I quickly rejected that thought). As I sat with my mind racing, the TV behind the counter was showing the local news, with the big story being the accident at the airport. Oh man. How could I have done this?

I decided the best course of action was to wait for the FAA to arrive, ‘fess up, and face the consequences. A black car arrived and drove down to the accident site, and we set out walking beside the runway toward it. The walk, while only about half mile, seemed much longer as I pondered my fate. When we got there, there was one man sitting in the car beside the plane (I can’t remember if he was FAA or NTSB). I explained what I had done, half expecting to be slapped in cuffs, but he just shrugged and said, “We didn’t close the airport, the airport owner did. You’ll have to ask him if you can leave.”

We walked back to the airport office, but the owner had apparently left for a bit. We went back to the restaurant, where the woman asked us what we discovered. We updated her and explained that we were going to wait for the owner to return, and request permission to depart. She said, “Well I’m his wife, so I can make that decision. You guys can take off.”  We wasted no time getting out of there.

I spent a lot of time reflecting on my mistake. I hadn’t planned on landing there, so I hadn’t done any of the pre-flight planning I would ordinarily do, which would include checking NOTAMS. It was a spur-of-the-moment decision; the sort of thing you can do on a road trip, but not when flying.

I later discovered that the accident was a fatal one. And I could have caused another fatality, had someone driven or walked onto the runway, knowing that the airport was NOTAMed closed. Never again would I be so cavalier in my decision-making. John Cotton
John's father was an Air Force pilot, flying C-119s in Korea. John became fasciated with flying from an early age, taking his first flight in a small plane at age six, which was his birthday request. Adult life got in the way of any aspirations of flying, busy with three kids and wrestling with college expenses, but finally he got his certificate at age 52. He is now retired, after 40 years of running a high-tech manufacturing firm, which affords him time to pursue his hobby. In 2017 he purchased a Cherokee Six and obtained an instrument rating to enable he and his wife to travel to see the grandkids.

Filing, dialing, and smiling—and a touch of humility
Scroll to top