Blog - Latest News
You are here: Home1 / Article Archive2 / I was there3 / An unexpected cross country challenge

It was the spring of 1969, with graduation from Indiana University and the next step toward my lifetime goal of becoming a fighter pilot approaching at a maddeningly slow pace. I was a cocky 22-year-old with 40 hours and a Private Pilot certificate compliments of the AFROTC program, and I was blissfully unaware of all those things yet to be learned about the amazing world of flight.

A couple of my co-ed friends had—with little difficulty—convinced me to show off my new skills by flying them home from Bloomington to Detroit. “No problem!” It is said that God smiles on drunks and fools. Well, my guess is that he was laughing out loud as I strutted around the rental Cessna 172, showing off my preflight skills and helping them stuff their things into the nooks and crannies for what was to be a two hour new adventure for all of us. Neither of them had flown in a light plane before.

Now you may think this is going to be just another story of mechanical problems, low fuel, inadvertent IMC, etc. But no, in fact the flight up to DTW went remarkably smoothly, though as I look back on it I am embarrassed at my performance and surprised I didn’t hear from the FAA for some of the thoughtless mistakes I made. Ignorance is bliss! 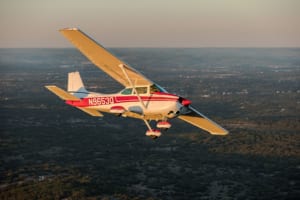 An airplane is a great way to impress a young lady… at least that’s what young men often think.

Flight training 50 years ago was considerably less demanding than today. My logbook shows that the checkout flight in the 172 a couple days earlier had lasted all of 40 minutes. If it had a transponder (which my 150 trainer didn’t) no one ever told me what it was nor how, when, and where to use it.

Arriving in the DTW area with the ATIS written down, I called Approach—probably well within the TCA (forerunner of Class B). I was clueless as to how patient the controllers were being with me at the time, though one exchange still sticks in my mind:

The landing was good enough to impress the girls and the FBO was a short taxi away. After parking and unloading, we walked in to meet their parents while the plane was refueled. It was past lunch time so I grabbed a sandwich and soda from the available vending machines. Here is where the real adventure begins.

After eating half of the tuna sandwich I had bought, I threw the rest in the trash because it didn’t taste very good. With my mind on the “big airport” challenges, I quickly put it out of my mind. I was absorbed with patting myself on the back about how well things were going. I was oblivious to the chuckling echoing through the firmament.

Taxi, takeoff, and departure were uneventful. I leveled out at 2,500 ft. and proceeded to backtrack on my original route.

Finally clear of the Detroit area, I tried to settle into the routine of following roads and railroads back to Indiana and things were going pretty well. Then, sometime after passing Toledo, I started to feel a little queasy.

It was a typical spring day with the usual level of convective bumps along the route so initially I figured I might be feeling the effect of those and gave it no serious thought—for a while. Maybe 15 minutes or so later, my stomach really started to revolt.

Of course I hadn’t ever thought of including barf bags for my passengers (I had never carried passengers before).

Back in the late ’60s, the scenery between Toledo and Ft. Wayne consisted almost entirely of corn fields. Large corn fields! When there was no question as to what was going to happen next, I slowed down, opened the—thankfully large—window and emptied my stomach into the crop below me.

I thought this would ease my troubles. WRONG! I continued further into dry heaves, which imposed some difficulty in controlling the plane while leaning out the window. Just about the time I was thinking I would start to feel better I began to get light headed and develop tunnel vision. Honestly, up to this point I was not worried, just physically miserable. Now, with my vision fading it occurred to me that I could pass out. That could be fatal! 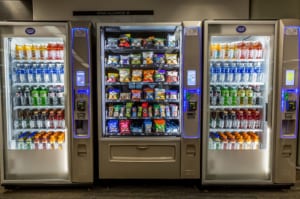 I decided it would be better to set down in the nearest corn field rather than have the plane crash on its own. So slapping myself on the cheek I slowed, put out full flaps, and aimed for the softest looking spot ahead of me. Taking big gulps of air, I let down to about 50 ft. above the tassels (now plainly in view). At this point I added some power and stopped the descent. I thought, Am I feeling a little better? After about 30 more seconds, I was sure I was! I added full power and began a go-around. I started a climb back up, but then things took a turn for the worse. Again the same symptoms began to return. Once again I headed back down for the corn. The same scenario pretty much repeated itself. Climbing back up again from this second aborted landing, I felt a little better and proceeded direct to the Ft. Wayne VORTAC and airport. My mind was set on making it all the way back to BMG.

I called FWA tower, requesting overflight at 2,500 ft., and was cleared as requested. More laughter from the heavens. This time I must have heard it because just then another round of nausea hit: without hesitation, from directly over the airport, I requested to land immediately. Tower cleared me to enter downwind for runway 23 and asked if I needed assistance. I think my voice gave them a clue. Of course I turned them down. Probably wasn’t my best landing, but after parking I was able to walk—barely—away. The line boy took one look at the side of the plane, then at me, and said not another word.

I walked directly into the FBO office, found the pilot lounge, lay down on the floor under a table, and went sound asleep (passed out?). Four hours later, I awoke feeling considerably better. I have no idea if anyone there ever checked on me. Following a short trip to the bathroom to splash water on my face, I walked back out to the plane. Someone had rinsed it off, but I didn’t even bother to thank anyone—the arrogance of youth!

If I had actually set the plane down in the corn, it most likely would have flipped, then been lost to view among the rows of stalks. Because I had no flight plan on file, no one would have had any idea where to search. These days, I always file a flight plan. Now, ForeFlight eases the whole process considerably.

There is always more to learn about flying. Take the time to listen and read about the experience of others.

Go or No Go: summertime in Florida