Blog - Latest News
You are here: Home1 / Article Archive2 / I was there3 / Aerobatics in a 1946 Auster—and a lesson learned

Some years ago, having left England for my French retirement, I imported an Auster from the UK with a view to displaying her at regional southwest events over the summer months. After several years of displaying in the UK a Nanchang CJ6, a superb radial engine plane that was used by the People’s Republic of China to train their recruits on before going on to fly Mig 15s, I thought it was time to try my hand at a something slow for a change, a plane with robust flying capabilities. 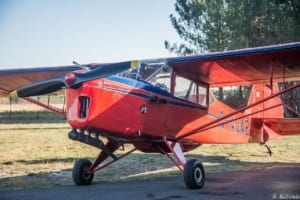 The Auster’s specialty is low and slow.

This J/1N Auster was a 1946 continuation of the type used during WWII as an artillery spotter, notably during the Italian campaign in 1944. It acquired a great reputation for flying low and hovering above German targets, chasing Panzers hiding amongst farm buildings or in the deepest forests before calling the shots, after which it was time to go back to camp at nightfall, landing on incredibly short strips surrounded by trees. Great fun, I imagined.

Let me tell you what makes this plane so incredibly fun to fly: it is a 900 kg, four seater cabin with a big prop fed by a 130 hp Gipsy Major (of the sort seen on Tiger Moths), its huge flaps when lowered to 40 degrees let you bring the speed down safely to 30 mph (28mph stall) to take off or land—shortly indeed in less than 100 metres. These are numbers that a microlight would struggle to achieve, should they be able to carry four adults.

So, I applied myself to develop a little routine around her flight qualities. J1/Ns are not cleared for aerobatics, so a display concentrating on a series of low passes at “top speed” (90 mph!) would, I thought, only achieve turning the crowd’s attention to their frites. It was therefore obvious that the six to eight minute display would be centred around slow flying. Conscious of the security recommendation I received a long time ago from my mentor, Brendan O’Brien, to never do more than 50% of what you and the plane can achieve, it would go as follows: after a short take off with mid-flaps and a climb at 60 mph, I would turn downwind at 80 mph and present her top and bottom. Then I would turn upwind slowing down, with full flaps, at 40mph and proceed to make a series of tight left and right orbits. I would do the same again while climbing and descending.

If the wind was kind enough, I would do a series of flat turns followed by slow climbing turns. At a good height, I would regain speed and proceed to do a couple of lazy eights and chandelles. Then I would work a series of approaches, as described earlier, touching down and up again with full flaps to impress on the Auster’s ability to climb steeply at 40mph. A very short landing preceded by a falling leaf completed the routine. 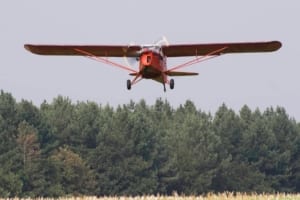 Short final is not the time for a wing to drop.

Everything had been rehearsed to satisfy Bob Hoover’s motto: “Know what you can do with your airplane and then, when you’re caught short, you’ll be successful in saving that airplane.” A good thing I always keep in mind. In that first summer, we produced a handful of displays for a public eager to discover a plane they’d never seen before.

During the last display of that first year, this happened: at approximately 300 ft, reaching the end of downwind and getting ready to start the first of my slow orbits to the right, without any warning, the right wing fell abruptly 90 degrees and the nose pitched down, an incipient spin if anything. I had never experienced this with Miss Piggy (her affectionate name) before. The trees at the side of the runway were coming up too fast for my liking. Immediate full application of left rudder fortunately prevented serious aggravation of the situation.

I decided there and then to abort the display and to land at once. I radioed in and, on short finals just before touchdown (still at about 20 ft), the same happened again! Same event, same reaction, and I managed to land safely. Upon cursory examination of the tail plane, elevators, ailerons, struts, and a look at the wings themselves we couldn’t find anything obviously wrong to justify such severe occurrence. In cases like these, one always questions oneself whether the flight was handled properly, but I knew I had done everything as usual.

In fact, during a rehearsal, prior to the display, everything had happened as expected and nothing unusual was noted. As my routine involves operating at or near stall speed, I am particularly sensitive to the plane’s behaviour. I rely on, and rightly receive from Miss Piggy, slight buffets from the controls to warn me of impending loss of flight. When this happens, it is just a case of reducing slightly the angle of bank or of adding a little power to put things back to normal. Everything is gentle, no problem.

I remember discussing this event with friends and colleagues before departure. Some put it down to possible weather or previous traffic occurrence on this dull, drizzly day, with no wind over the trees bordering the runway. Somehow, I doubted this was the reason. During the return flight, I was particularly attentive to any unusual behaviour and we landed at base without further problem. Just in case, I had added 5 mph to my approach speed. 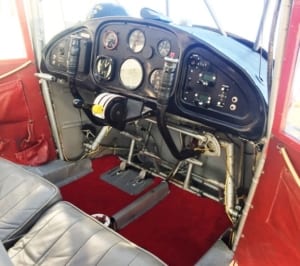 There’s no glass panel to give real-time angle of attack information here.

Very perturbed by this incident, I did further stall tests at altitude. On every occasion, the right wing would drop massively. I no longer recognised Miss Piggy in this violent behaviour and, literally, I was feeling disappointed, if not plain angry, with her as if she had broken the bond we had managed to build together. I had to find out what was wrong with her. Many an engineer had inspected the structure of the plane, the angle of the wings, etc., and I realised that no one had fully investigated all possible causes of the problem.

Having borrowed a stepladder, I wanted to look in detail at the wings themselves. I didn’t have to go far. As I was passing my hand over the leading edge of the right wing, my fingers felt what appeared to be a fine, eight inch wide, slit in the fabric right behind and parallel to the edge. It didn’t take me long to understand what had been happening. As speed neared the stall, the disturbed airflow would lift the fabric and form a pocket and the air would rush inside the wing, thus creating a violent gush and precipitate the stall. The sudden distortion of the fabric had happened at the worst possible place in terms of lift. I had found the culprit. Of course, on a low wing aeroplane, this would have been spotted earlier.

Paradoxically, I felt relieved that my flying was not the cause of the incident. Some will say that a series of cursory pre-flight checks over time was responsible, and I have to admit it. A simple glance at the state of the fabric from the back of the wing is quicker than climbing a stepladder before each flight but would have not spotted the thinning of the fabric. I have learned a lesson from this and now, being tall enough, I do pass my hand over the leading edges before each flight. The slit was promptly covered with duct tape and a further flight confirmed only a benign stall. Things were back to normal. The bond was reformed. The previous owner had assured me that the fabric, not at its best, would last another two years before needing replacement. And how right was he. Didier Keller
Didier Keller, now 73 years old, was born in Paris, France. He spent 40 years working in Canada and Britain and traveling the world. Logbooks show an excess of 2500 hours, but do not mention same again spent with his dad in the air and the mountains. He took Didier up one day a in a Fairchild F24 at the tender age of 4 and that injected the bug in him for life. His father enjoyed 70 years and 6500 happy hours, never having been a commercial pilot and that is rather rare. Didier enjoyed flying in the US, Canada, Africa, Britain and the glaciers of French Alps. Latterly he became a great classic and ex-military planes lover and displayed them over the past 15 years. All along, he has strived to keep his son in the loop to confirm what was learnt so young: that there never is a better co-pilot (or pilot) than your own blood.