I was back in the sim for annual recurrent training which, naturally enough, includes flying lots of instrument approaches, typically in pretty low simulated weather conditions.

A standard procedure in crew flying is to “brief” the approach before beginning the procedure. Single pilots are taught to do the same thing, though the “brief” amounts to talking to oneself.

Several years ago, Jeppesen created and trade marked the “briefing strip” across the top of its approach charts. The briefing strip includes all the basic information such as navaid frequency and indent, inbound course, final fix crossing altitude and decision altitude. It’s all very convenient for one pilot to read aloud and agree with the other pilot on how the procedure will be flown.

In the meantime, I selected the approach procedure from the menu on the flight management system (FMS). The system tuned the ILS frequency, identified it and showed me the ident letters in plain English, set the inbound course on the HSI display, and posted the crossing altitudes for the fixes involved in the approach. I could see this this critical information on the HSI, on the moving map, and on the active flight plan. 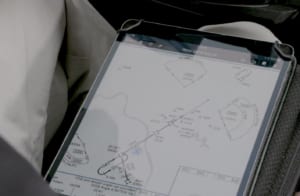 It’s still just a digital version of a paper chart.

So why did we as a crew, and even more critically a single pilot, spend valuable time reading from an approach chart information and functions that the FMS had accomplished automatically, and clearly displayed, with a single entry? Because the approach briefing from a chart is a leftover from the days when we had no other options to obtain the necessary information to fly an approach.

Remember when you had to actually reach for knobs to dial in the ILS frequency? And then reach for another knob to set the inbound course? And if you were very careful you listened to the Morse code beeps to confirm the identification of the localizer signal? And then clipped the approach chart to the control wheel in front of you to refer back to the various crossing altitudes because that was the only place to see them?

That seems like eons ago for most of us—in piston singles or turbine airplanes—flying IFR with fully integrated nav systems, and electronic display of approach charts. But in the training system it’s still 1980 and no automation has happened, or at least been fully accepted, and we still spend time staring at replicas of paper charts displayed on one of the many screens that are now in nearly all cockpits.

My sim instructors told me that some pilots they had trained recently even dug into the nav system to make sure it displayed the same five-digit channel number shown on the chart for a GPS based LPV approach. I wonder if they were trying to impress the instructors with their diligence, or actually did that in real life flying.

But, you say, we need to consult the approach chart to be sure the FMS has not made a mistake in tuning the frequency or setting the course. Really?

Guess what? I just loaded both the nav database that feeds all the approach information to the FMS and the new approach chart updates into the system. And both databases were on the same memstick. The nav database came through the Collins system, maker of our avionics suite. The charts came directly from Jepp. But do you think Collins generates its own nav data? Of course not. Collins, or Garmin or Avidyne are in the hardware business, not nav data business. The nav data and charts are both created from common sources of electronic data. And the entire process is electronic, no matter if displayed only electronically, or directed to a printer to put ink on paper.

But, you say, the chart shows lots of extra information such as nearby obstructions. Yes. But the TAWS (terrain awareness and warning system) found even in panel mounted GPS/IFR navigators shows me obstructions on the moving map. Get too close the obstructions displayed change color to alert me. Get really close and a voice yells at me to take avoidance action. Can the chart do any of that?

The approach chart clearly shows missed approach instructions. Some formats use arrows to show which direction to fly and when to turn. But any FMS worthy of the name does much better. Click the go-around button and you get lateral and vertical guidance to fly the miss, including where and how to enter any hold in the procedure. And that info is on the active flight plan display if you want to review it before starting the approach. Engage the autopilot on the miss and it will fly the procedure automatically, including altitude and heading changes, and entering the hold. 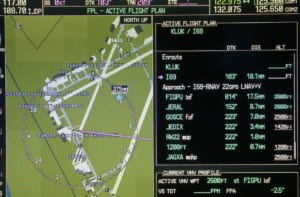 Most modern GPS navigators display all the essential information, including altitudes.

When electronic displays of approach charts first become available, we all marveled at the convenience. No more filing chart updates, no lugging around big binders of charts, and no need to take out a chart page and clip it to the yoke.

It all became even more magical when we could see our little “own ship” airplane moving across the approach chart. What great situational awareness.

But those advantages only lasted a few years. The terrain avoidance systems came along and show us the location and our proximity to obstructions. Synthetic vision systems (SVS) really sealed the deal by displaying the terrain and actual runway so we could not only see approach guidance, but where we we’re aimed and what we needed to miss.

Several major flight departments I know have changed their SOPs to not show the approach chart on the multi-function display (MFD) during the approach. They found it to be distracting and not adding useful information. Charts are, naturally, displayed north up which, when approaching a runway in any direction but to the north, is in visual conflict with the SVS, moving map, and TAWS displays which are shown course up.

But there’s still one reason we have to look at approach charts—to find our specific minimums. So far, no system I know of in general aviation airplanes, shows minimum altitudes and visibilities for your specific situation. The reason is there are many variables. For example, approach minimums can vary with approach speed category, or available altimeter setting, or failure of some equipment such as approach lights. Minimums are really a matrix, so we need to consult the lower portion of the approach chart to see our actual descent and visibility minimums for that approach.

I’m hoping that soon the avionics companies will automatically show the minimums approach matrix when we select an approach to fly in the same way it automatically dials frequencies and sets the course. That would save the time of having to call up the chart just to check mins.

I know most pilots won’t give up approach charts anytime soon. But having spent a career creating publications on paper I can tell you that no matter how much proofreading one does, mistakes make it into print. So charts hold no sanctity of accuracy for me. At least no more accuracy than to trump the electronic database that was the source for the charts anyway.

Briefing the approach is still an essential element in crew coordination and safety, but instead of looking at a chart, we can brief the procedure right from the graphic and text displayed right in front of us. Jepp’s briefing strip is great, but seeing the plan mapped out for you is even better.