It was not a dark and stormy night—rather a dreary, overcast day, late morning; call it ceiling 1200 ft. and 5 miles viz with a temperature-dewpoint spread of two degrees. It could easily burn off in an hour or go down to 200 and 1/2 in fog. Typical January in Fairfield, CA, at Travis AFB (SUU). January 1976 actually. I was the Instructor Pilot (IP) for the 301st Military Airlift Squadron (AF Reserve) on this transition (approach and landing practice) local flight. Each pilot was required to make two approaches and two landings (2&2) every 30 days to maintain landing currency in the C-5A. We were flying 69-00012 which today rests in area 22 in the boneyard at Davis-Monthan AFB in Tucson, AZ. I plan to visit her one of these days.

On our fourth ILS approach to runway 21L, we completed our fourth touch and go landing and were climbing out to prepare for a pilot change and more approaches and landings. We retracted gear and flaps and just before entering the overcast we slammed into a flight of Canada Geese, in classic “V” formation I assume—we never saw them. We sucked several of the large, 12-15 pound birds into the engines. Number one fire handle illuminated red. Numbers two and three engines began vibrating violently with rpm fluctuating 500-1000 revolutions. 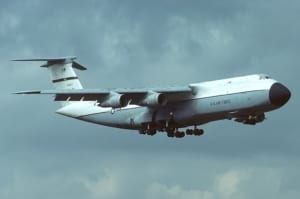 The C-5 can fly with an engine out—but how about two?

Butch Hollins was in the left seat, having just completed his two-and-two for the month. Butch was a 10,000-hour furloughed Pan Am First Officer. Most of our Air Force Reserve Squadron pilots were furloughed, highly-experienced airline pilots. “That’s not good,” said Butch, reaching for the fire handle and waiting for my nod to pull it and discharge the extinguishing agent. “Shall we pull back two and three?”

“Yes,” I said. “You stay in the seat and keep flying. Declare an emergency with approach control. Ask for vectors for another ILS with no left turns! I’ll deal with the engines. Jump Seat (third seat occupant), you call the Command Post. Tell them we’re shutting down engines one and two after a bird strike and landing ASAP. Tell them we’re IMC. Give them souls on board and three hours fuel!”

I pulled both number two and three engines back close to idle until the vibration stopped, or almost stopped. Then I pushed number two back up slowly until the vibrations started again. Back to idle. Number three came up to nearly 40 percent before serious vibration was evident. I left it there. Engines number four and three would be our source of thrust. The Jump Seat said, “The Command Post is calling Lockheed and wants us to fly an extended pattern ‘til they get back to us!” That didn’t sound very likely to me.

I had never pulled Command Post duty but a close friend had while recovering from eye surgery. He described it as hours of near catatonic boredom interspersed with brief moments of stark terror—a lot like overwater flying. He said there were times when they were talking with Ramstein (Germany), Lod (Israel), Yokota (Japan), and Diego Garcia (Indian Ocean) all at the same time about the same issue. The duty he described sounded like a series of career make-or-break decision challenges. Someone had to make tough decisions to keep the cargo moving and departures and arrivals happening on time. When you got it right your OER (Officer Efficiency Report) had you walking on water. When you got it wrong, well… you didn’t. There was a huge responsibility when handling in-flight emergencies even though final authority rested with the PIC. You didn’t want to be the Command Post weenie who told the Aircraft Commander to take off with a failed hydraulic pump if it later proved crucial to the mission.

Butch was flying the Galaxy well. He had solved the asymmetric thrust problem with the rudder trim and a touch of aileron trim and the airplane was actually quite stable flying in the very slightest of skids. Engine number four was likely undamaged, lucky for us, and number three at 40 percent was helping, too. We were fortunate to be at a gross weight of less than 450,000 pounds, pretty standard for the local training flights. It would be an entirely different story at 650,000 or even 700,000 pounds—more typical mission gross weights. The Flight Engineer placed wing/engine watchers on both sides of the airplane to report smoke, fire, debris—whatever—coming out of the engines. The flight controls all felt normal.

As fate would have it I had just completed required annual simulator training a month prior. We finished early and the instructor said, “Anything you want to try? It’s your nickel!”

“How about two engines out on one side?” I suggested. “Is the simulator set up for that?”

“You bet! How about Clark Air Base in the Phillippines, ceiling 200 ft., viz 1/2. Numbers one and two engines shut down for fire?”

“Bring it on!” I said, anticipating the enormous right rudder input required to fly straight with numbers one and two engines both caged. I was shocked. The Galaxy’s good manners were nowhere more in evidence than with engine(s) out. At medium power settings the rudder pressure could be almost totally trimmed out. “That’s Lockheed,” said the simulator IP. “There’s a reason the rudder is as big as Nevada. It’s a pilot’s airplane.” The simulator approach to minimums, hand flown, was totally anticlimactic. The ensuing missed approach was more exciting with lots of rudder needed to compensate for no left wing thrust but the rudder was there, even at near full power on three and four. The memory was still vivid and I knew we could easily bring 00012 back around, land and walk away from it. 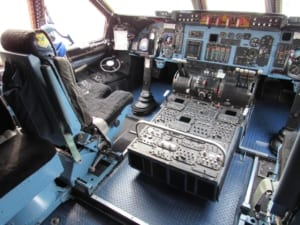 The guys on the ground can give advice, but it’s up to the PIC to make the right call.

“Command Post wants to talk to the IP,” said the jump seat. “They are getting Lockheed on the line!” At precisely that moment we slipped into a break in the clouds—one, two, three seconds in clear skies. Straight down I could see the intersection northeast of the base with the duck club turnoff, the water tank, the little corral—unmistakable! I had driven that road 50 times. As we slipped below the clouds I had a brief second of clarity—rare for me—but never more welcome. I see the ground. I know exactly where I am. I am PIC and know beyond the faintest shadow of a doubt that we can land safely on runway 21 right.

“I have the airplane—copilot has the airplane,” I said, shaking the yoke gently and beginning a gentle descent. I corrected my verbiage for the Cockpit Voice Recorder. “Butch—I know exactly where we are. Cancel IFR with approach, call the the tower, declare the emergency and tell them we are VFR turning a two-mile final for 21 right, two engines out, 12 souls, three hours fuel. Run the Before Landing Checklist—hold the gear until we start down!”

“Roger,” said Butch. “Copilot has the airplane, checklist working. Command Post on two wants to talk to the IP. I told them we’d catch up with them shortly—really busy right now.”

“Excellent. Give me flaps twenty. Loadmaster, ensure everybody’s strapped in and prepped for quick exit if necessary. We’ll clear the runway and turn it over to maintenance on the ramp. Butch—pilot—it’s your airplane on rollout at 50 knots. Check brakes but keep momentum up for the right turn off the runway—we have no thrust on the left side to help you turn.” (Only the pilot has nosewheel steering on the C-5A so taxiing is a left seat activity.)

The landing, rollout, and exit to the ramp were routine. Fire trucks and maintenance were waiting with a marshaller and tug just at the ramp’s edge. We shut down per checklists and exited the airplane with the maintenance book. The crew was checking out the feathers and blood smeared on the TF-39 engine inlets, each big enough to house a Volkswagen Beetle. Maintenance would eventually change three engines and return 00012 to service. She retired to sunny Tucson in 2014 after 45 years hauling cargo worldwide.

The takeaways? Obviously, I had a well-trained crew of professionals operating a machine that performed as advertised in every parameter. There were certainly no heroics by any of us. Tension in our voices? Certainly! Concern that the engine fire could spread? Of course. But the hammered-home procedures in our various checklists covered it all.

As for the PIC aspects, there is perhaps a tendency to seek help when lives are at stake, that maybe someone, somewhere out there is going to have been there before. They’ll have the brilliant idea that solves the problem instantly. I admit to hoping that a Command Post call would generate a, “Hey! I just had that same damn thing happen to me last week! Here’s what I did…” Total fantasy. It’s always good to have outside help and advice—especially experienced help and advice. But in the end the Pilot In Command is the one ultimately responsible for getting the guys (and now lots of gals!) home safely. It’s worth reminding one’s PIC-self while strapping in on every flight: “I gotta get these folks back home safe!” J.D. Lodato
J.D. Lodato soloed at Reece AFB, Lubbock, Texas, in November 1966—a few years back. His 24-year Air Force and Reserve career included tours in KC-135s, O-2As in Laos, and lots of overwater hours in the C-5A. Blessed with good health and a canny memory of the typical medical eye chart, he is still performing flight reviews and instrument proficiency checks at Pangborn Memorial Airport in Wenatchee, Washington (EAT). He is currently Chief Pilot for the Spirit of Wenatchee Project, who built and fly a replica '30s-vintage Bellanca CH-400 Skyrocket to honor the first nonstop flight of the Pacific Ocean, which landed in East Wenatchee in October, 1931. Clyde E. Pangborn and Hugh Herndon, Jr. were the pilots.