Blog - Latest News
You are here: Home1 / Article Archive2 / I was there3 / Witnessing an earthquake from the air

Chile is a long and narrow country in South America, some 4500 km long and only 450 km at its maximum width. This peculiar geographical feature is just one aspect of the very special situation in Chile. In particular, the fact that the continental tectonic plate enters below Chile, at about 40 km depth, makes the tectonics of this country one of the most active in the world, producing the most intense earthquakes and eruptions around the planet (hundreds of volcanoes around the 4500 km).

As a matter of fact, the most powerful earthquake registered worldwide took place on May 22, 1960, in Valdivia, some 850 km south of the capital, Santiago. The magnitude of that event, 9.0 on the Richter scale, is equivalent to thousands of atomic bombs, destroyed the city of Valdivia, and generated a huge tsunami. This affected the nearby coast, killing hundreds and devastating industry and seashore as far as the Japanese coast. Still today, one can see remains of that earthquake in the Valdivia region. 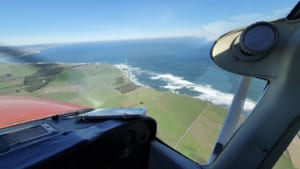 The coastline is beautiful, but it hides some major tectonic action.

On February 27, 2010, another major earthquake occurred, this time 8.8 on the Richter scale and with a hypocenter at 30 km depth, onn the coast north of Concepción, a city some 500 km South of Santiago. Although this time the energy liberated in the hypocenter was lower than the one in Valdivia in 1960, the damage was larger in the country, since a big slab of the plate moved. The earthquake was quite strong, covering almost the entire country, and generated a tsunami along the whole coast of Chile. Some 600 people perished in the event, and new measures were taken to prevent the population from being affected by tsunamis.

Although these are impressively strong earthquakes, Chile has learned to build cities accordingly, and so few buildings collapsed in the 2010 event. I lived at that time in a 4th floor apartment with my family in Santiago, and believe me, the experience was terrifying with this 8.8 earthquake. Honestly, I was quite sure that the building would collapse at any moment. You barely can be standing during the quake. Fortunately, the building did not collapse and only minor damage occurred.

This major earthquake produced many “replicas” or smaller earthquakes for the next few months, and one of these is the center of this story.

On March 11, 2010, less than one month after this traumatic earthquake event, I was a fresh new private pilot, with a certificate obtained some 3 months ago, and eager to fly as much as possible. The planned flight was in a Cessna 152 II, two seats and plate CC-KSG, an old trainer from the Club Aéreo de Santiago, the principal flight club in Chile and one of the largest in South America. It is also the largest and perhaps oldest flight school in Chile (since 1928), with more than 35 airplanes. The club owns the so-called Aeródromo Tobalaba, with the official name Aeródromo Eulogio Sánchez (SCTB), the largest general aviation airfield in Chile, and the second busiest runway in Chile, after the international airport in Santiago. In spite of this, the runway, oriented 01-19, is only 1000 m long and does not have VOR or other navaids—only an abbreviated PAPI plus very efficient tower controllers. It is also in the middle of Santiago, with houses all around (see this Friday Photo).

The aforementioned flight was intended to overfly the coast of the Pacific Ocean, some 55 nm to the west, and return. An easy and nice sightseeing flight from above.

An interesting moment of the flight was, as usual, before takeoff, during the preflight and planning, when calculating the fuel for the trip. Consider that the airplane does not have a super performance (near 90-95 kt at 65% power), although a reasonably good endurance of four hours. So, 200 nm as total distance has to be carefully considered. I thought that it was enough to have only 45 min of reserve and no more. So, no plain fuel tanks, for a trip of two to two and a half hours maximum, including an overfly along the coast. However, I remembered the local saying, “no fuel, no life,” so this time I chose to fill up the tanks to the top, and thus have a larger fuel reserve. I was traveling alone, so there was no problem with the maximum load. With full tanks, I was still a little bit under the maximum takeoff weight. 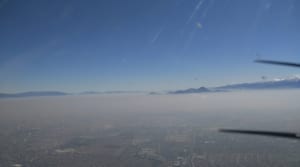 The flight was very nice, almost no clouds, visibility around 7 to 8 km (due to a typical inversion layer at the season, see pictures), sunshine during a wonderful South American fall, more than 10 km slant visibility, all computed, all considered. The airplane did its best, the engine roared smoothly, the coast overfly was wonderful. In the words of Richard L. Collins, an almost “perfect flight.” Too good to be true. After almost two hours over the coast, it was time to come back.

As the return trip now headed east, about 20 nm from the metropolitan airspace and flying at 4500 ft AMSL, I noted something odd in the landscape. Some clear amount of dust was being elevated from the soil. In 10 minutes, the visibility went to almost nil. What happened?

Just at the moment I decided to call the metropolitan flight information center, to ask what was going on, I received a call from the same center saying that a major earthquake just happened minutes ago. All airports were momentarily closed and flights would be rerouted and/or have to wait for instructions in the air. Indeed, too good to be true. My major concern was the visibility, since it had begun to really deteriorate, and I had almost no IFR training. I decided to go up for a better horizon line, which finally happened at 5500 ft, pretty much at the inversion layer altitude that fall season in Santiago.

I flew to SCTB waiting for instructions. Then I was instructed to wait above a determined zone south of SCTB for more than 20 minutes, then other 20 to 30 minutes, and so on. Meanwhile, they were checking the runway from damage. The earthquake I did not feel at all… but could see with my eyes. It was a 7.0, also a major event. While circling, I remembered what a good idea it had been to fill up the fuel tanks to the top.

Eventually, the dust subsided and the visibility improved, but still no landing authorization came. When I was thinking about going to a nearby airfield at the edge of my fuel reserve, I received the radio notice that the authorities had reopened the airfield. Shortly, I received my landing clearance. I landed with a 35 min reserve. Had I not filled up the tanks, which was the original plan, I would have had a reserve for only 10 minutes of flight! A good lesson from the earth to the air. Air, land and sea: connections exist sometimes far from our imagination, and when possible to foresee, we must take them into serious consideration.