Blog - Latest News
You are here: Home1 / Article Archive2 / I was there3 / Familiarity breeds? Engine failures, real and imagined 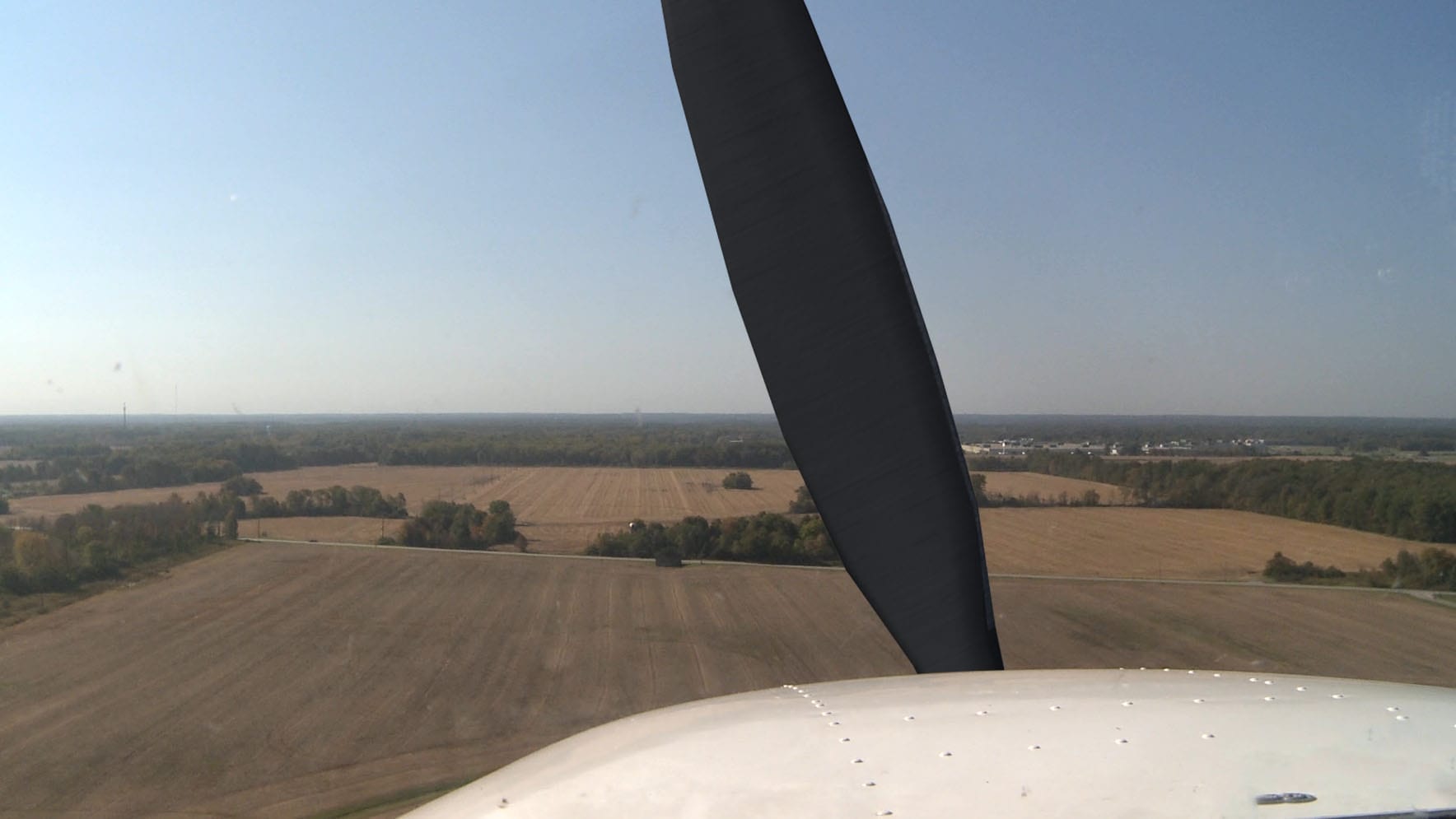 The British poet and philosopher Geoffrey Chaucer (~1340 – 1400) was a brilliant man, well before his time, for he coined the phrase “familiarity breeds contempt” some 500 years before it was needed and popped up stuck in my throat during flight training.

With a lifelong burning desire to fly, finally in middle age I set out to find a flight instructor. I needed one who wasn’t obviously too young, or looked at me and started laughing. I picked out a candidate, took him out for a really nice dinner, and told him I had two weeks’ vacation, and wanted to learn to fly and get my license. The bizarre look on his face took me aback, but I persisted. He asked what gave me the idea that a fat 47-year-old surgeon wannabe could learn to fly at all, let alone in two weeks? He said he didn’t like it, and whatever happened would be my fault, not his, etc., etc. But I kept pushing.

Finally, finishing dinner, he relented and we set a date to start. What he didn’t tell me was that he was joining the FAA, leaving for training in Oklahoma two weeks later, and I’m sure he thought I would become his last, unfinished, and obviously worst student. 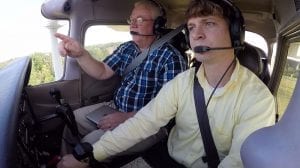 Every instructor has their own areas of emphasis.

My “flying lesson #1” began right on time, well before I was really ready, as we hustled into the plane. He called it a “trauma-hawk” I think, and it appeared much too small for the 6’2” instructor and me, his aged overweight victim. But no time to think: “left hand on the wheel—right hand there, that’s the throttle—push it, steer with your feet—go straight, now pull back, more—not so much, no, damn it—straight I said…”

Then a little while later, when I had managed a minute or two of level flight at what seemed really high (likely 2000 feet AGL), and had calmed down a little, he turned to me, almost sweetly, and said, “I’m real sorry to have t’ tell you, but you just lost your engine.” The engine noise dropped, along with the nose of the plane. What?? No! I’m not ready for this! I’d only just done one tentative turn, poorly, lost altitude, and had to climb back up. I wondered if that had set him off, and this was revenge.

I looked and saw land ahead, couldn’t get the glide speed right (more hollering), and he occasionally revved the engine, reminding me it was there but I couldn’t have it. In the end I thought I did fair, for the very first time—maybe?—maybe not. As I recall, I just made it to shore, coming in over the marsh at about 100 feet, when he took the plane away from me completely, gave us back the engine, and we were saved!

Back up at altitude and back on the controls, there were a couple other things he requested, and my performance seemed to not upset him at all—but I was wrong. Here we go again! Three more engine out simulations followed, over different fields, miles apart; one even had decent grass instead of marsh or corn stalks. My first flight finally ended with my bouncing, white knuckle first landing. He got out, mumbled that I had hurt his back (maybe because I am a spine surgeon?), walked around, checked the landing gear and the prop, and then drawled, “See you back after lunch for another flight.”

I said a weak, “Sure,” and then turned back to ask, “do we have to do that engine out thing again?” But he was gone.

The damn engine out drills continued, and then “familiarity breeds contempt” popped into my head, plus some anger and frustration. But much later on, toward the end of the two weeks and what seemed like 200 or so of these favorite “drills” of his, my fear had diminished, I was losing my contempt, and started telling friends I was cool about the maneuver (yeah, right).

Happily, I did go on and finish training, got my Private license (not in the two weeks), and finally got my own plane, a sweet Cherokee 6-300. I began flying with my wife Pat to my nationwide medical assignments, and over the years slowly moved up thru the certificates to finish ATP—many thanks to my long-suffering instructor who stuck with me (but don’t mention the word “back”). In the 400,000 or so miles we flew in the US and Canada, only a couple of times did we have to do my instructor’s “favorite” maneuver for real.

Most notable was returning to Dulles one afternoon after finally passing my CFI checkride, with the FAA examiner sitting left seat. We were assigned 1300 AGL direct to runway 1R. Busy radio traffic blocked contact, and the trainee controller finally picked us up when we were nearly over the numbers and about to squawk and run. Suddenly we heard the immortal words, “Shit! All planes stand still! 73 Xray, hard left 360, cleared to land 1 right.” 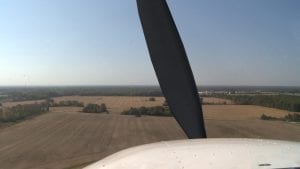 When it happens for real, it feels very different.

I dumped the power, and, sadly, was much too busy dead stick landing to catch the unique scene of all those planes in the sky. I wondered why, despite a perfect dead stick landing, the FAA guy was in such a big hurry to get out of the plane and run inside.

Our very last flying trip delivered the final exam, literally out of the blue. We were headed for Hilton Head at 8000 in clear skies, with tops 6000 and IFR below, when I pulled the throttle to start our descent—and nothing happened! After further checks, throttle control was gone and the engine stuck at full power. I declared an emergency, requested direct Savannah for the ILS to runway 1, and then tried other ways of reducing altitude and airspeed. Twin training for emergency rapid descents came to mind, and the maneuver worked well to quickly lose altitude, but speed increased even more. It was clear that shutdown well before touchdown was mandatory, to avoid gear failure and possible fire. I requested distance callouts when on the localizer, stayed well high, and, when the field was made, shut down the engine.

The reality was supremely different from all the practice, almost sensory deprivation. It’s way too quiet: no engine sound at all, and you know you won’t get it back. You see nothing but pure white and the backside of a dead prop, and know you are nowhere near safe on the ground. But as we glided through the whiteout we slowed down, and finally white gave way to broken at about 500 AGL, and my extensive “fright” training came through. A short slip, and we landed on the numbers, made the first turnoff, crossed over, and just cleared the parallel taxiway when we finally rolled to a stop.

I heard tower clear the first of the long line of “big iron” waiting on the taxiway to position and hold. I called tower and said, “73 Xray—we need a tug.” RC Thompson
Robert “RC” Thompson deferred flying while finishing college, medical school, marriage, children, and establishing a surgical practice. But when his oldest daughter went far away to college, he began flight training. Later he practiced as a traveling physician with his nurse/wife, Pat, and flew in every lower state and all the Canadian provinces. He gradually worked his way up the ratings over the years, ending up with ATP and Flight Instructor. He was very active with the Flying Physicians Association (past president), and did research on pilot visual errors and the “Black Hole Visual Landing” issue. He retired from flying in 2006, and still misses it.

Witnessing an earthquake from the air

Fun and games at 14,000 feet: reflections of a jump pilot
Scroll to top