Many years ago, there was a young boy of four or five, standing with his father, his left hand locked into the larger grip, looking ahead. His eyes were peeled to see the giant Boeing 747 from afar as it revved up its engines. He could hear the whine and then steadily the roar grew as the magnificent beast neared the middle of the runway opposite the viewing platform, then gently and effortlessly lifted off the surface of the earth, carrying hundreds of passengers within its cavernous fuselage. He could feel the gentle, reassuring pressure on his hand from his father’s grip. With his mouth open and his eyes saucer-wide, he had to be gently pulled from this awesome mechanical beauty even minutes after the aircraft was miles away and barely visible. The seed of the love of flight took root that day.

I still remember that day as I sit in the cockpit of a general aviation aircraft. There is a certain majesty to these machines that Otto built without power and Orville and Wilbur flew with power. We have come a long way baby—a long-forgotten term, but it is true. From barely flyable projectiles to things that hover, climb straight up, and then zip along the air at many hundreds of miles an hour without a human at their controls. But that is not what this is about. It is about the human control and the ecstasy of those magical moments. 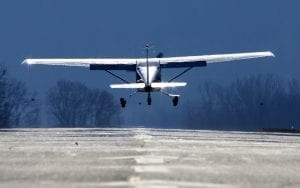 The moment of magic.

When you push the throttle in and initiate that gentle shudder of anticipation, and motion blurs in a receding landscape, there is potential, there is anticipation, there is the raw feel of something magical in that moment. You look at the landscape speed past and then with a gentle tug on the yoke, the moment of pure joy is realized. The aircraft lifts off the surface of the earth and the runway and grass recede quickly in the foreground and the buildings and trees fall away on all sides, as you climb straight ahead into the sky.

It doesn’t matter if it is blue or gray, the aerodynamic forces are in control and they yield only to thrust and lift to counter the drag and weight. The roar of the engine becomes a constant and welcome hum. The aircraft responds majestically to the pilot’s control. There is a certain magic in the flight of any aircraft. It is felt, it is imagined, it is experienced at a deeper level and then captured in the treasury of the pilot’s memory locket.

I have flown many thousands of hours and seen many magical things that mere land-lubber mortals have never witnessed. I have flown under an overcast with a setting sun behind me lighting up the undulating underbelly of the clouds brightly with gold. I have ventured countless times under the instrument guidance through the gray, featureless clouds, listening to the constant rumble of the engine. And I have climbed above those clouds and seen the rising sun peek above this soft, cottony canopied undercast where only a few buildings dared protest and break above the clouds to gasp for air. There is magic, pure and simple, in those moments. Nothing matches, compares, or equals.

Under the blue sky, I have seen the honeycombed green forests of packed trees gently move to the invisible breezes. I have seen the steeple of churches poke and peak above the green canopy below, in a desire to reach and touch the face of God. I have seen buildings enriched with brightly colored lights and one-way opposing streets with red and white lights demarcate the blocks. There are vistas and views from above that are incomparable, that are limited on the surface. The world appears different, calm, quiet, and almost magical from that vantage point. Humans disappear from view, then the buildings, but the natural majesty of mountains, forests and lakes, the seas and the barren landscapes, remain.

You look below you at this wonder of nature, crafted over thousands of years, and marvel at the ability to see them in all their natural beauty. It is truly an awesome view to behold. I can see the rake of the mountain as the tectonics lifted it above the surface, and the crashing boulders and dirt that cascaded down to create a gently sloping surface. I have seen the jutting hills raised in what we can conjecture must have been a seismic event of unparalleled angst. I have seen large oval lakes shaped by the impact of meteors long ago; the heavy star dust that might have been the source of the first inkling of life on our planet.

I have seen narrow pathways like pencil drawings curve around a mountain, reaching to its very peak, and seen miles and miles of seemingly endless paved roads crisscrossing the surface engaging commerce and land travel within the nation. I have seen smog and limited visibility and clear skies and beautiful landscape spread out for hundreds of miles. There is majesty on this planet, and it is the privilege of being a pilot that brings home the many gifts of such comforting views. 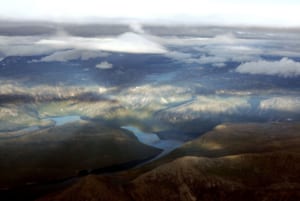 There are winds aloft, sometimes brutal, bucking against the aircraft at 30 to 70 miles an hour, slowing you down and perhaps at times helping you zip along the earth’s surface at a pace described perfectly by Maverick as a “need for speed.” Although flying under a blue sky barely gives you that discernment of speed, it is mostly when you are barely above the clouds, rocketing through and above their ragged surface, when it feels like you are surfing with unimaginable swiftness.

It is relatively quiet up there. The only chatter is between Air Traffic Control and the pilots flying. The communication to non-pilots sounds cryptic, but it is concise and directive. Most communication either initiated by the pilot or ATC starts with a “Good (time of the day)” wishes. There is politeness even among the harried controllers handling simultaneous arrivals and departures. Everyone seems to love what they do in aviation, and that is a great blessing while flying.

As the aerodynamic forces of thrust overcoming drag and weight levitate the aircraft off the surface of the earth, the same forces under the pilot’s control, in reverse, bring it down. Pulling back on the throttle and adding drag in the form of gear, flaps, and slats helps gravity bring the aircraft to its desired destination. The buildings start growing in comparative size, the trees that looked like a green undergrowth become taller, and the roads now become populated with commerce once again.

The pilot lines up for the distant runway and, drawing on hours of experience, manages its energy to gently bring the aircraft safely down onto the runway. The flight ends with the chirp of the tires as they rub against the friction of the asphalt, and sometimes the gentle union between those disparate materials merges without even a sound. the rapid turn of the wheels and the decelerating speed of the aircraft on the asphalt reunited to gravity’s grasp. But the pilot’s work is not done until the aircraft is emptied and secured. Then the memory banks get filled from that recent flight, from the experiential wisdom.

From that holding of my father’s hand and the gentle, reassuring grip at the moment of flight came the dream to fly. And even though he never realized it for himself, his son one day would become a pilot and soar into the skies. The image of his square, military jaw observing the miracle of flight still lingers to this day. I am glad he is looking down from above and feeling proud of his son’s realized dreams.

May we all have dreams, and may we all live fruitfully to achieve them.