Blog - Latest News
You are here: Home1 / Article Archive2 / I was there3 / Go Goodyear—mixing it up with the blimps 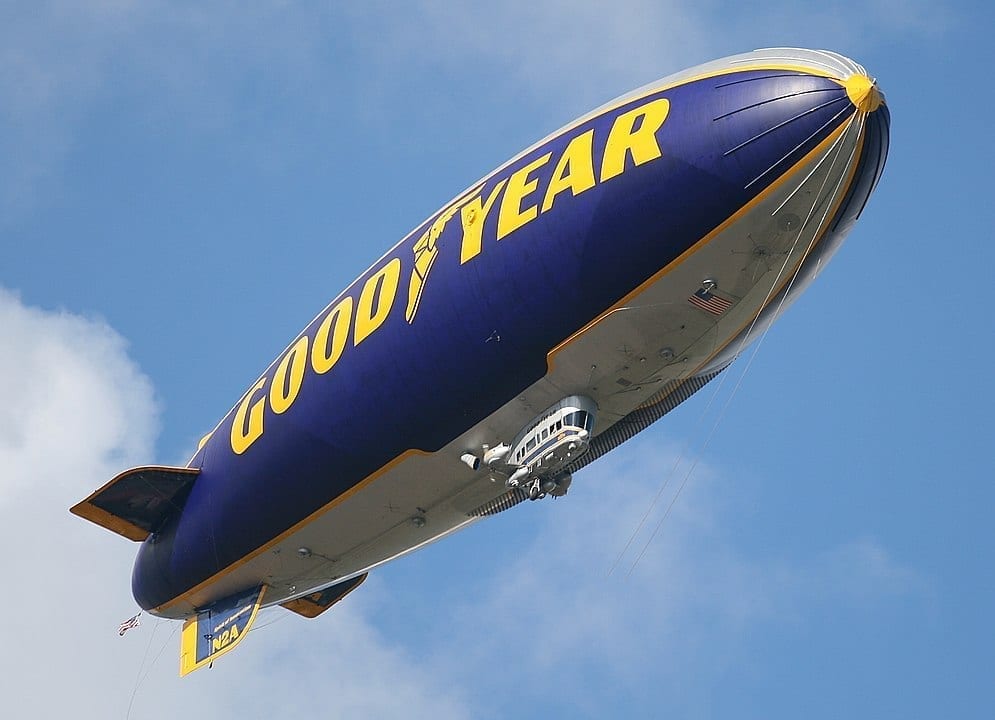 On Tuesday evenings, if the weather was decent enough for John and I to fly the Fulton Flying Club Mooney 201, we would practice instrument approaches. From the Akron VOR (ACO) there were approaches into Akron-Canton Airport, Akron-Fulton Airport, Kent State Airport, Portage County Airport in Ravenna, and Miller Airport in Deerfield. They provided the three main types of approaches that were available at almost all airports. We practiced all of them: ILS, localizer, VOR, and NDB approaches. All of these airports were within a thirty mile radius.

It was a good area for training and maintaining instrument currency. ACO VOR had a lot of traffic and required extra vigilance. Unfortunately two aircraft met there one day, resulting in four fatalities, while I lived in that area. Only one was talking to approach control. ADS-B could have prevented that.

John and I would take turns flying the approaches using only the aircraft instruments with no outside reference. One would fly and the other would watch for other aircraft. We would be in contact with Akron-Canton Approach and flying according to their instructions. This would fit us in safely with other local traffic under their control but there was also other traffic that was not under their control, so visual vigilance was necessary from the person performing watch pilot duty in the right seat of the plane.

Since we mostly flew after work and often after dark, there was not much other aircraft traffic that was not in contact with Akron-Canton approach control. At night it is easier than in daylight to see other aircraft as it is required for all aircraft to be lighted. They stand out against the dark sky unless they are below you and mix with lights on the ground.

When you fly near Akron, this is just part of the traffic pattern.

When flying in the Akron area in daylight, one would occasionally see one of the slow flying Goodyear blimps. Wingfoot Lake grass airport and hangar, a few miles south of Akron, was the location where Goodyear built the blimps and trained new crews. The blimps appear quite large to most people on the ground but when flying near them they do not seem as large. I had seen the German dirigible Hindenburg when I was a small boy in New Jersey. The Hindenburg was the largest aircraft ever built and a little more than four times larger than the Goodyear blimps. The blimps were certainly much larger than the plane John and I were flying when doing approach practice, but appeared small against the memory of the Hindenburg.

After flying, John and I would head home to heat our late dinners in our family microwaves. It was either what our wives had prepared that night, leftovers, or something the Stouffer family in Cleveland had whipped up in their nearby plant. Instrument flying was fairly intense so we were hungry enough to enjoy whatever we put in the microwave.

We flew weekly as often as the weather allowed. Our area had frequent opportunity for flying in clouds, in rain, and in snow, and we often did but there were times that we were grounded or chose not to fly by thunderstorms, severe turbulence, high winds, extremely low clouds, or ice. There are many sayings in aviation, one of them is, “Any fool can fly an airplane but knowing when not to is crucial.” In our area of the Great Lakes there were many times “not to.” Northeast Ohio has more overcast days than any place in the country. Weather bureau statistics verify this. We did this over several years until both John and I sold our shares in the club airplane. John retired and headed to a new home in the South. I retired and decided to build my own homebuilt kit aircraft.

We would occasionally email each other and reminisce about our many flights. Two nights, both in the fall of 1999, are still vivid in our memories and both involve blimps, maybe the same one. We got a call from Akron-Canton Approach asking us if we had seen the blimp. It was missing. We did not see it that night but the next morning we learned that we had probably flown over it on one of our approaches. It had a control malfunction and slowly spiraled to the ground, landing in treetops in Suffield about two miles from its base. No one was injured and very little damage was done.

The blimps were equipped with lighted signs that had running messages along the full side of their hulls, advertising Goodyear products. They were not something one could easily miss over your town so it was quite an effective means of advertising. Night flying was also done for TV coverage over stadiums for night sports events. They would often train crews in our area for night flying and we would see one, but usually off in the distance. Approach control kept them well separated from other traffic. That night they were not running their lighted sign and no other aircraft had seen them either.

Another night earlier in the year, just as we had finished enough approach practice for the night and were returning to our base, we were both flying visually. John said there was something strange off to the left at about 11 o’clock on an intersecting path. There appeared to be lights at our altitude but too far apart to be a plane. Although we could not see clearly as it was too dark, there seemed to be a darker mass in between the lights. Approach control had not notified us of any traffic in our area either.

John said, “I’m turning on our landing light, so we can be seen better.” Almost instantly the dark mass began flashing GO GOODYEAR in twenty foot high letters! This was followed by various other running messages about how good Goodyear tires were and what was on sale at the time. Every available light on the blimp was on as well. Their cruising speed was about 45 miles an hour and ours was 180. We were on an intersecting course and not far from them. It was up to us to avoid them; they were too slow to maneuver. They had to get our attention, right now, or it would have been equally bad for both of us.

John instantly turned to the right and we missed them by about two hundred feet—which is quite close in the air at our closing speed. It’s hard not to think of that night any time John and I see the words GO GOODYEAR. We almost had GOODYEAR wrapped all around our airplane. We definitely would have gone, but it would not have been a good year.

A great day of flying—solo to Santa Barbara