Blog - Latest News
You are here: Home1 / Article Archive2 / Technique3 / Bridging the gap – why we need to teach pilots how to use electronic... 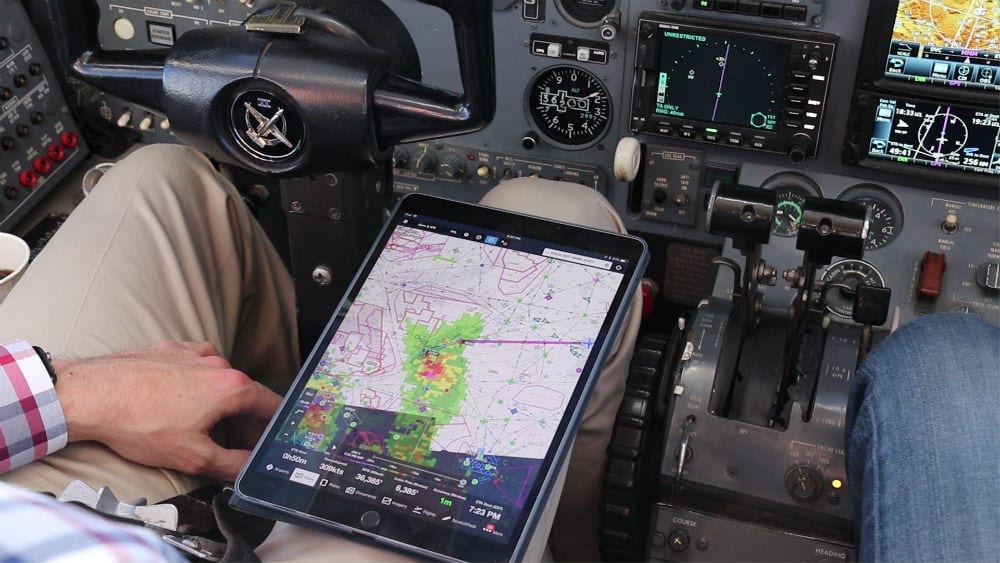 On July 20, 2007, the FAA issued Advisory Circular 91-78. It states that pilots can replace paper charts with an EFB (Electronic Flight Bag, FAA-speak for tablets running flight management apps) for most Part 91 operations as long as the application and chart data are kept up to date. It recommends that you carry a backup source of data, like a second tablet or phone or paper charts.

Today, tablets running EFB applications (i.e. ForeFlight, FlyQ, Garmin Pilot and others) are common in cockpits. However, students wanting to become proficient with EFB use are left to search for training videos on YouTube and to experiment with it in flight. They are hard pressed to find a CFI who will not only teach them how to use an EFB, but also how to manage its use in the cockpit.

A few months ago, Justin Cleland, co-owner of JB Aviation, and Mike Nowakowski, CFII and the Chief Flight Instructor at JB Aviation’s Flight School at Galt Airport, sat down to update the school’s syllabus.

Mike recalls, “Justin and I sat in development and discussed what we’re going to put in the syllabus. We added items, and then we stepped back and asked, ‘Well, wait a minute… is this relevant anymore?’”

The concepts still apply, but the methods were outdated.

The iPad a reality for most pilots these days – why don’t many schools teach it?

Teletype limitations required coded weather reports. He asked, “How does that make someone a better pilot? Instead of spending an hour translating NOTAMs and METARs with a student asking, ‘What does this mean? What does that mean?’ and ‘I don’t understand that,’ we read the decoded weather briefings and ask more meaningful questions. The student is learning something important for the next hour. That’s a huge advantage.”

“There’s a sense that you’re not a good pilot if you don’t do things the way you were taught years ago,” Justin added. “That’s not the way it works. Technology moves forward!”

Transitioning from the PTS and adopting the ACS required a seismic shift in preparing students for their checkride. The ACS teaches “single pilot cockpit resource management.” A skills gap can exist between flight instructors and students, who come in expecting to learn how to use an iPad in the cockpit.

Mike says, “As a flight school, we have to answer that, otherwise we’re not going to be in this business for long. Some instructors feel they’re just here to teach you how to fly, not how to use a tablet. We don’t agree with that mentality.”

Justin recalled flights with students as a CFI: “We’d be on our way to Monroe and we’d tell them something has happened and we’re going to divert to Beloit. We’d ask, ‘How many miles is it to Beloit?’ Well, four minutes later after they look at their sectional and we’re already past Beloit, the student would say, ‘Seven miles. We’ll be there in seven miles.’ That question is fair game on a checkride. Now, they can just grab that magenta line in ForeFlight, drop it over Beloit and say, ‘Four minutes and twenty-two seconds.’ That frees us up as instructors to do more, to provide more complicated scenarios and add more depth to the training.”

The EFB reduces the workload, improving the safety and efficiency of a flight so the pilot can concentrate on the flying.

“When I get into an airplane now, I have ForeFlight connected to my headset and my ADS-B transponder. It’s a 3-dimensional volume of continuously updated, live information: weather, traffic, TFRs, runway closures, winds aloft, even fuel prices. It’s like having a co-pilot!”

He said, “You can’t tell me we should disregard those amazing benefits just to use a manual E6B and a paper sectional.”

But they knew it can prove distracting, too. And they had concerns about the potential for an EFB to make a pilot lazy. When students are taught to use it correctly, they agree that it can make for a more situationally aware, safer pilot. They wanted to close that skills gap.

The flight school needed to add EFB expertise on the team. Fortunately, that expert had an airplane and hangar right there at Galt.

Ron Friend is an Advanced Ground Instructor and a ForeFlight guru. He joined the discussions. They talked about how to incorporate ever-evolving EFB systems into the flight training syllabus.

Intro to ForeFlight, Ron’s first class, has been added to the syllabus. He uses a foundational approach that includes how to enter pilot and aircraft information, how to do a weight and balance computation, and basic flight planning.

Ron says, “You still have to populate ForeFlight with specific information from the POH before you leave the ground.”

As good as the iPad is, students need to start with the old sectional chart.

They decided to not allow students to use an EFB in the cockpit until they can prove to the instructor they can fly from Point A to Point B with a chart in their lap.

A DPE might not ask you to use a manual E6B, but you will probably be asked how and where ForeFlight got the performance information to do its calculations.

But a student learning just how to use an EFB won’t know anything about magnetic variation. That’s a built-in function of ForeFlight. You don’t want to get in the airplane with a DPE and have him or her ask why you decided to fly at 4,500 feet, with your only reply being, “Because ForeFlight told me to.”

“You still have to know the concepts,” Justin said. “As my math teacher used to say, ‘I want to see your work.’”

Ron created a second ForeFlight class titled, How’d it Go? He teaches it after a student has used ForeFlight in the cockpit and has had a taste of what it’s like to be a little overwhelmed by the information it provides.

A section of Ron’s hangar is set up as a classroom, complete with a large screen monitor and a Redbird simulator. Ron said, “I can take the iPad out of an airplane, mount it on my simulator, turn it on, and there’s no difference in ForeFlight between the plane and the simulator.”

“The new generation of students is very comfortable with the technology and we want to bring them in. That’s the future. The tools are already being used. JB Aviation teaches students to use them effectively.”