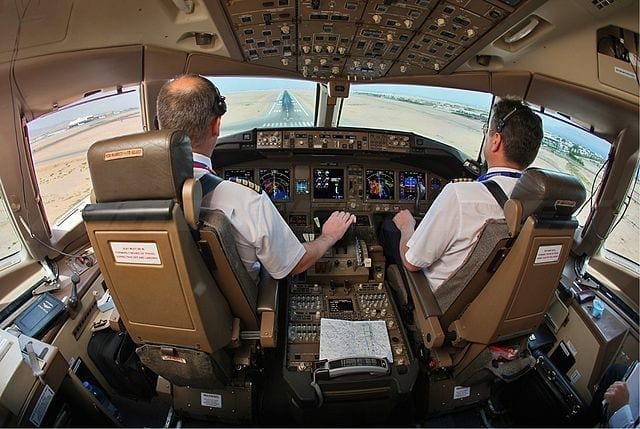 When I first upgraded to captain about seven years ago, I flew with a first officer who was senior to me (this has happened many times over my career, both at the regional I started at, and now at my major, because I took the first available upgrade both times). Though it was seven years ago and we only flew one trip together, I remember this person in particular because of her story and because I learned some valuable lessons from flying with her (that’s a story for another article. Thanks, Anne). Anyway, every time I fly with someone senior to me, I find that the reason they haven’t upgraded (though they could have) always seems to be for quality of life.

I used to believe that was a risky way to run your career. In a movie, when the characters celebrate too soon, you just know that as soon as they start celebrating or hugging, the danger is reintroduced, and someone usually gets taken out. So I always used to believe that choosing “quality of life” in this career was the same as celebrating too soon, but now I think about this differently.

The first time you fly with someone, there is always a “get-to-know-you” part of the trip, especially the first day or two, where we talk a bunch about our situations and our stories, and I always ask a lot of questions about the other person like, “Are you married? Kids?” “Where do you live?” “Who did you fly for before?” (which leads to a whole bunch of other questions), and, “How did you get into flying in the first place?” It’s really interesting to hear all of the different paths we all took to find ourselves at our current company, airplane, and seat.

Every first officer has a unique story to tell.

It’s fascinating to hear all of the different educations, family situations, cities people live in, companies people flew for, types of flying they’ve done, and skills or hobbies people have. Some people have had a smooth transition from flight instructing to a regional to their one and only major. Some people have been furloughed seven times or have worked for multiple companies that went out of business. I have flown with people with their Series 7 stockbroker licenses, people with doctor and lawyer credentials, rehabbers, people seriously into running, mountain biking, road biking, people who are currently famous on YouTube or Instagram, people who grew up poor, people who grew up rich, people who make movies, people who have been in movies, people who have had radio shows, people who code/hack, corporate guys, military guys, people into beer making, into cooking, into gardening and trees, into history, into politics, into economics, into world travel, and one guy that got run over by a car multiple times, wound up in the hospital, had a long time to think and I learned some valuable things from him too. In other words, it’s an amazing variety of people who we fly with.

These first officers are skilled, interesting, intelligent, and have a great work ethic and attitude. They are highly knowledgeable about the airplane and the industry. There are many who have been with the company six to 18 years and haven’t upgraded to captain. (Current upgrade time at my company in 2018 varies up and down and varies with base and airplane, but is about five years.) They often worked for a major before ours and were furloughed. They could be making twice the money that they make as first officers. They could have the “prestige” of being a captain, and having their spouse address them as “Captain (fill-in-the-blank).” They could have the ego boost at the cocktail party of being introduced as “a captain at airline X” (important to some). With the extra salary, they could have more availability of bank loans, a nicer car, a nicer house, and yet, they have chosen to stay first officers.

It’s important to remember that as first officers, they must become (what is termed in the industry) a chameleon, meaning… they have to make each new captain they fly with their “best bud” for the trip. It is a great first officer asset to have the skill to make your captain believe they are the funniest, wittiest, wisest, most-knowledgeable, and most-skilled person they’ve flown with in a long time. It has to be implied in such a way that they don’t appear to be sucking up at all. (No one likes a suck up.) This chameleon ability is a serious first officer skill; one that should be diligently developed, because it will be needed.

No matter how nerdy, dufus-y, angry, boring, non-standard, new, junior, young, old, or any other attribute that could be inserted to make a four-day trip hell, no matter what, their lives go easier if they convincingly make their captain believe that they are great. Why? Because the first officer has to work within three feet of their captain for hours at a time, in a tiny space, with no other person for conversation; and they have to do this for two to four days. They are also expected/required to mostly do what the captain wants unless it violates safety.

At my house, because we both work in the industry, we have a running joke that you know it’s time to upgrade when you just can’t stand flying with another “dufus” in the left seat – it’s time for you to be the dufus. (Don’t get offended, captains. Just a joke… but if you don’t know who the dufus in the room is… I’m just sayin’.) So why do some first officers put up with all of this and forgo the perks of captain-dom?

Being junior might mean some time spent at crash pads in remote cities.

In the beginning of my career, it was all go. Get as far as you can as fast as you can. I was young and single, the job was new and fun and exciting. It didn’t matter if I was junior – I could put up with a short callout on reserve, or red-eyes, or flying every weekend and missing all of the holidays (at my house, we have a true story about getting to a hotel on Christmas Day while working at the regional, only to find that all the restaurants were closed and the only food was the vending machine). I could put up with low-paying trips with long hotel or airport sits; in other words, everything that goes along with being junior.

It didn’t matter because the upside (new, fun, exciting, career advancement), outweighed the downside. I had always heard advice from the captains I flew with that you always take first available upgrade, because you don’t know when the music will stop (i.e., economic slowdown = hiring stops) and upgrades would be frozen, or a merger would happen, or you’d be furloughed and on the street looking for a job. Your chances were better in all situations if you had been captain. So I took that advice, and always took first available.

Suddenly, about a year after I took first upgrade at the major, I had this sudden realization that a person could go 30 years, their entire career, chasing the rabbit. Think of a greyhound running. It runs around and around without ever catching the rabbit. I looked ahead and realized that taking “first available” is probably good advice from a “protect your downside” mentality. (I am a fan of this with finances. Personal finance is a nerd-passion of mine.) But, it meant that before I got very senior on the first officer list, I went to being junior on the captain list. At my company, the captains are all relatively young and not going anywhere, so it meant I was in for another 10-15 years of first reserve, then red-eyes, four-days, weekends/holidays, low-paying trips, etc. That’s a long time.

At seven years after upgrade, I’m halfway into it now. Off reserve after the first 2.5 years, but still getting assigned inefficient four-day trips, working every weekend, can’t get most holidays off, can’t get the shorter trips, etc.

You can go your whole career chasing the rabbit; chasing the airline, chasing the airplane, chasing the seat, always being junior. You can go your whole career and miss everything. You can miss your kids growing up, your marriage, your friends, holidays, weekend events, miss your life. The first officers I fly with who choose quality of life over the other perks of upgrade have had this realization. Time is a commodity that is ever more valuable. Your future greyhound might say sometimes it’s better to just let the rabbit go and roll around in the grass for a while.

Threats: can they keep us safe?

Guy garbage: a woman learns to fly in the 1950s
Scroll to top