Blog - Latest News
You are here: Home1 / Article Archive2 / I was there3 / What are the chances? Jumpseating to get married 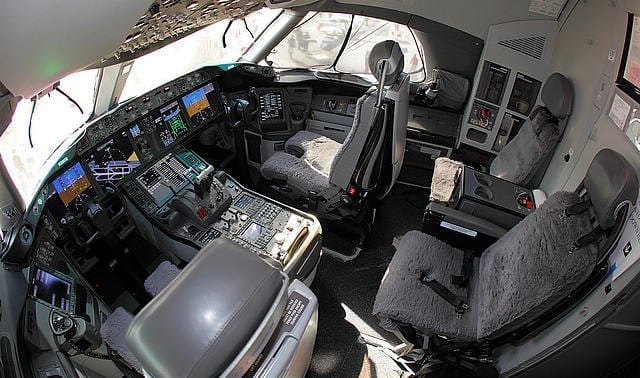 In 2003, my future husband and I were both commuter pilots at different airlines, and after dating for three years, we decided to hitch our collective wagons. We met each other at the wedding of two pilots. Apparently, two marrying pilots beget another set of marrying pilots, so the result was inevitable. (Wedding planners seat the single people together and near the bar… so it’s pretty much a plot.)

I was still flight instructing when we met, and my future husband was already an Airline Pilot (capital letters used to represent awe.) For three years, he was willing to do a three-leg commute on his days off to come see me. We were based in Richmond, Virginia, and Fresno, California, respectively. A man with no parallel, he was (and is) definitely a keeper. (Exactly zero sarcasm intended here.)

While dating and during our days at the commuters, we often used our jumpseating privileges to travel around, not only to see each other, but everything else as well. I jumpseated on an around-the-world trip once on United’s flight 1. The flight went from Los Angeles to Hong Kong, then to Delhi (got stuck there for five extra days trying to jumpseat out) then Delhi to London and then to Washington-Dulles and back to LAX. We were poor commuter pilots. My husband’s first year pay was $17.75 per hour, and a couple of years later, I started at $18.83 per hour. Even the taxes you have to pay in order to list for standby on a flight as a non-rev (which puts you slightly higher on the priority list than a jumpseater) were too expensive for us.

Those extra seats can be a major perk for traveling airline pilots.

As an additional perk when jumpseating, sometimes you even got to sit in business class and feel fancy. One way to get a meal that wasn’t ramen noodles was riding in business class. Sometimes the flight attendants would feel sorry for you and load you up with first class leftovers. Once, my husband was sent home with an entire sleeve of Biscoff cookies. Jumpseating for free (a great pilot privilege) was the way to go! In addition, when we sat up front, we found it fun and interesting to see how pilots at the other airlines do things. So, we thought nothing of it when we decided on a Hawaiian beach wedding for $800 all-in. We planned on jumpseating there.

Enter the ridiculousness, stage right. We had completed all the arrangements, so all that was left was to show up. We decided to go a day early and got ourselves to the airport in Salt Lake to start our adventure. There was a flight through San Francisco, and a different flight through LAX, both at the same time and with gates next to each other, both connecting to Honolulu. We planned the San Fran connection.

We walked up to the ticket counter and introduced ourselves to the ticket counter agent, explaining that we were both commuter pilots, jumpseating to be married the next day. We were excited and in high spirits and the agent was friendly, so we made jokes and small talk throughout the discussion. We requested jumpseat forms, so that we could get them done ahead of time and would not have to bother the gate agent for them.

The ticket counter agent was very nice, and excited for us. We discussed the flight to SFO and to LAX and she looked them both up to see which was better for available seats going to Honolulu. After looking up all the customer loads, she gave us boarding passes (with the seats on them!) and sent us off to the gate. Happily, the stress of wondering if we’d get on the flight was gone. We had seats! And, an even greater miracle, we had seats together!

Arriving at the gate, we went to the podium and politely waited until acknowledged, then introduced ourselves to the harried gate agent. The agent, too busy to bother with jumpseaters or standbys right at that moment, said they would call us at the end if we could get on. Knowing we had been issued seats already and that we already had our jumpseat forms, we said thank you, and stepped back. We did not want to take more of the agent’s time.

We then boarded the flight when our section was called. We knew that the agent would see that we already had seats when he got to the time of clearing standbys, and would be relieved at not having to deal with us. Upon boarding, we introduced ourselves to the cockpit and flight attendant crew, requesting a ride to our wedding, were granted said privilege, and handed over our jumpseat forms to the crew. We sat down in our seats—excited because we got on and we got two seats together!

Just before the door closed, that gate agent that had been so very busy when we said hello, stormed back to our row and lit into us for doing something wrong. We were not used to being yelled at (it’s quite embarrassing), and were a bit flummoxed. We were both very conscientious about acting on our best behavior, out of respect for having the privilege. Neither of us could understand what was happening.

The passengers looked on, and we stared dumbfounded (probably mouths hanging open), while the agent yelled at us about how we couldn’t just sit wherever we wanted, and we shouldn’t even be on the flight, and we should have known better. Confused, we tried to gather our thoughts and formulate a question, but there was no time. The frustrated agent said, “I’m leaving you on, only so I can get the flight out on time!” wheeled about and stormed off. We had no idea what had just happened, or what we had done wrong, but we were very happy they didn’t have time to deal with us and it appeared that we were still going.

The man in the aisle seat in our row was in it with us. He must have felt like he was getting scolded too, as when the agent left, he commented, “What a *&?$!” which relieved some of the tension.

It all worked out in the end.

We sunk down into our seats, trying to figure it out, and praying for the door to close so we would know we were staying on. After takeoff, we looked at our boarding passes, and yes, we were in the right seats. We looked and looked, and thought and thought. Finally, we figured out what in the heck we had done. We had boarded the flight we had originally planned on, but the ticket counter agent had switched us to the one she felt would give us better chances. She had undoubtedly told us which flight she put us on, but sounded like Charlie Brown’s teacher to us in our excitement of what we were doing and being handed boarding passes with seats! Together!

Both flights just happened to leave out of gates next to each other, at the same time, and both had the same row open (the row we had been given the boarding passes for), so we didn’t notice anything was wrong. They weren’t using scanners yet much at that time, so it wasn’t caught as we boarded. The gate agent must have thought that we somehow did it on purpose and just went and arrogantly sat in an empty row of our choosing. We were mortified, but snickered the entire way to Hawaii (and back) about the dumb, confused looks we must have had on our faces while we were yelled at, having zero idea what was going on.

Two flights leaving at the same time, gates next to each other, connecting through different California cities, with the same two seats open, to the city that we originally intended but not to the city we had boarding passes for, agent too busy to deal with standbys when we introduced ourselves, and no scanner to catch the error. Still funny to this day, to have started our marriage that way… with a ridiculous airline story, of course.

“No complaints” – how I stumbled into a thunderstorm