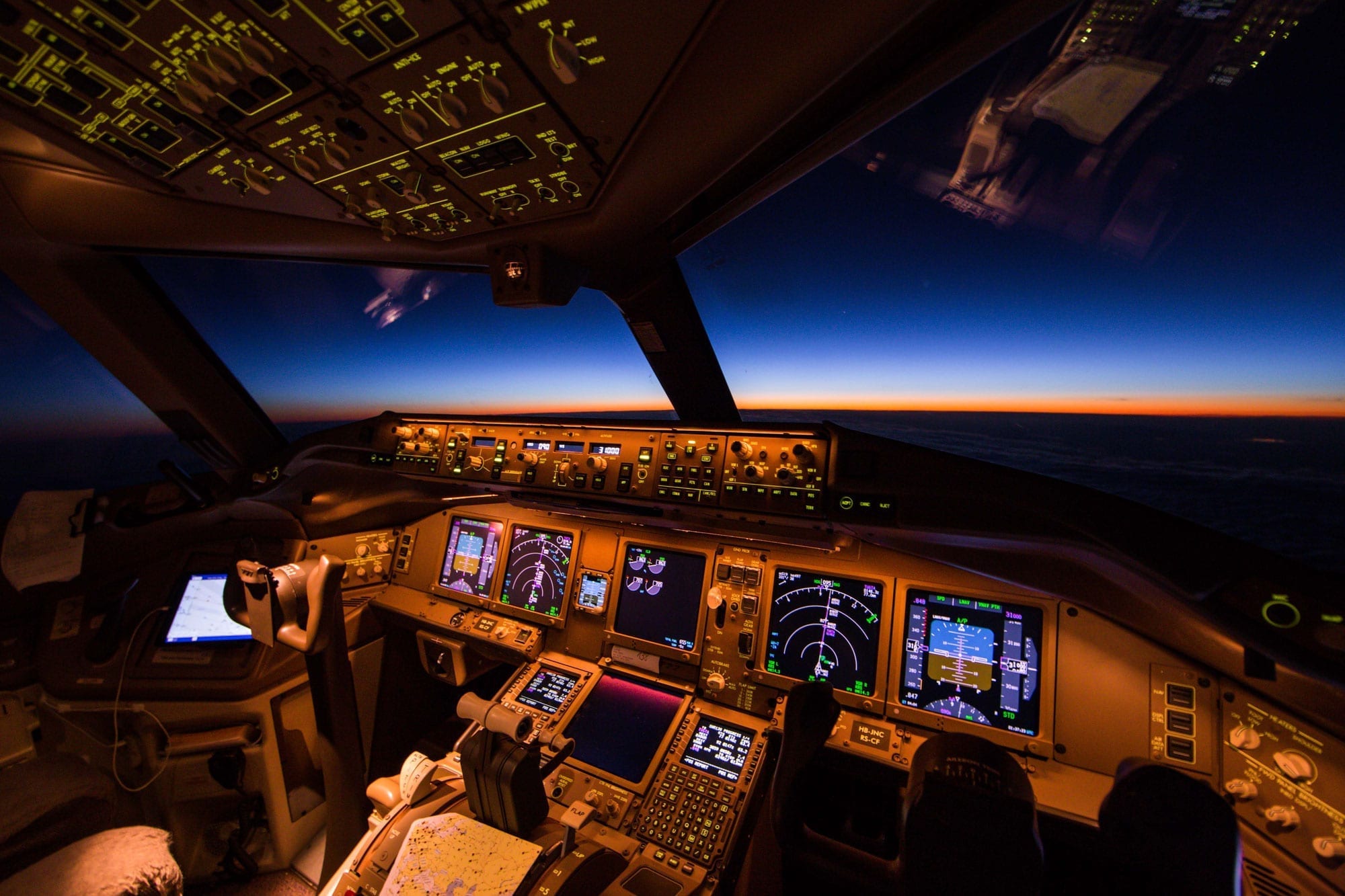 No horizon line. No lights. Black below; black above. You’ve left the comforting, glowing lights along the shoreline and set your track into the void over the black, depthless ocean.

On a moonless or cloudy night, over deep water, without visual reference and out of normal VHF radio communications range with air traffic control, you are alone. Having charge of all souls on board, while always a heavy responsibility, feels heavier.

If you’ve never flown the oceanic system, imagine piloting a lone sailboat striking out into deep water to sail to Europe. Or imagine leaving the warm, blue atmosphere into the cold dark for the Moon (for the record, I stipulate that space flight may be more complicated). As an airline pilot entering class II oceanic airspace, you have more of a feeling of being completely on your own than anywhere else in the system.

Over land, you’d usually have many more resources available. For example, flying most places domestically, you have several suitable airports to land at within your fuel range and within just a few minutes of the need arising. You also have quick and easy communications with air traffic control. They have you in sight on radar most of the time. They can provide valuable support in times of compressed decision making. But over water, your normal resources are much more limited.

Fire or smoke? Medical emergency? Loss of hydraulics or other mechanical failure? A line of thunderstorms has blown into your path with 70,000 foot tops, (and you at 35,000 feet)? Volcanic ash cloud blown over the flight path? You are at least an hour from the nearest suitable airport for landing. Deviating off course is limited by the oceanic airways and HF “communications” (the sarcastic looking quotes are meant to indicate that communication may be the wrong choice of words).

It can get very lonely out over the Atlantic.

Lack of close suitable airports, lack of communication, and as always, you are limited in your choices by fuel. If necessary, you have the option of declaring an emergency and doing the safest thing when you cannot get air traffic approval in time, but you are also taking the chance of flying into other traffic when deviating off of the airways.

Imagine the following scenario. You are sitting in the cockpit, preparing the aircraft for the flight as the passengers board. You load and check your flight plan and waypoints, check the weather, test the HF radio. You’ve checked the suitable alternate airports; fuel is legal and suitable for the planned flight and reserve.

Now you’ve departed. After reaching your first oceanic waypoint, you’ve left radar coverage, and entered the “no man’s land” of the oceanic system. You configure the HF radio to make the required position reports. The HF radio bounces a signal off of the ionosphere, sounds like it travels to Pluto, goes back in time to the 80s, and around the world seven times before it comes creaking back to your speakers.

While you mentally rehearse the required minute-long speech comprising your position report, 10 other pilots jump on the radio, trying to jam their position reports in, so they can go back to quietly pondering the depths of the ocean below. Listening for eons to other aircraft making their long and difficult-to-read position reports and the relay service reading it back to each one, requesting confirmations each way of the things that couldn’t be heard or understood. Each of your position reports can take anywhere from a minute (if you get on at just the right time), to 15 minutes if there is a long line and/or if communication is especially bad.

Imagine tuning into a radio station with barely a signal, mostly static, turning up the volume and shouting back and forth. Without the coverage of radar, these position reports are required in the oceanic tracks to keep airplanes separated by time crossing fixes, and altitudes. In other words, air traffic control can’t “see” you anymore; nor can they hear you on the normal VHF frequencies. You must relay your position on the HF radio through a service or middleman who goes between you and air traffic control. Because of the communication difficulty and time required to communicate, getting permission to actually do something takes forever. It has to be relayed by this middleman service from you to air traffic control and then ATC’s response to the relay service, and they back to you.

You are now two hours into your oceanic flight, with hours to go. As you prepare for your next excruciating position report, several incredibly loud, startling buzzers sound in the cockpit; an emergency call from the flight attendants. One row of your passengers thinks they smell smoke. As the flight attendants evaluate the state of that row’s mental health, and brief each other on the information, one of them points out a haze in the air. They conclude that there is definite smoke, and now believe that the cabin floor may feel warm. You are one hour from the nearest suitable airport.

Or, you are two hours off shore again, and they call. Someone is having a heart attack or stroke in the cabin. You are still more than one hour from any suitable airport. Or imagine that you are congratulating yourself on having made three flawless position reports with just the right amount of seniority in your voice, when your on-board radar picks up a line of red radar returns that now entirely covers your oceanic airway.

They’re called tracks, but sometimes they feel like prison cells.

At 500 miles per hour, you’ll be reaching that weather in 19 minutes. It can take 15 minutes to request permission to deviate and get an answer back from air traffic control through the middleman radio service. The minutes stretch while waiting for a response while you hurtle toward the red line. Fourteen minutes later, you receive a call to your aircraft’s HF radio, and the answer is “unable” to your request to deviate off of your airway to avoid the weather (possibly due to other aircraft on the airway in the direction you need to go). You are running out of time and options; a position no pilot is comfortable with.

As each airline pilot prepares for their overwater flights, they think about these scenarios. Because of the vast stretches of time and space without a place to land, sometimes “good” options don’t exist.

As companies add Satcom to the aircraft, faster and clearer communication becomes available to pilots overwater. Satcom is basically a phone in the cockpit with the ability to call dispatch for weather info and a host of other information, a telemedicine service to speak with doctors, and air traffic control. Communication is clear and easy to understand. Another invaluable resource that is being added to aircraft is Controller Pilot Data Link Communications, or CPDLC. This system allows the aircraft to be “seen” while overwater and out of radar coverage.

In an airplane with CPDLC, the archaic HF position reports are not needed. Altitude change requests and deviations off track can be requested with a text message. Response times are much faster and absolutely clear because they are in writing. In an environment of reduced resources like over water flights, these added resources are invaluable to pilots when needing to make decisions in a time compressed situation.

Companies adding these very expensive systems to cockpits should be lauded, as these resources don’t bring in revenue. They do provide the company with the efficiencies of increased communication abilities. For example, unnecessary diversions may be avoided and the best choice of airport can be used more often. With better communication to someone that has full access to all information in real time, we may be able to choose an airport for diversion that has customs facilities, fuel, gate space, handling abilities vs. just choosing the known close airport and not knowing if it has a gate or handling available.

Overwater flights may seem like just another day at the office, but like a lone sailboat on the ocean, or space flight, out over the water you are on your own with more limited resources and many things can happen. You cannot plan for the all of the vicissitudes of life. What you can do is consider the resources that you do have before and during the flight: your crew, telemedicine, your dispatcher, fuel, suitable airports, communications, air to air comm with other airplanes in the oceanic system, and others.

In my 19 years flying for airlines, 13 of those years flying over water, I’ve been fortunate to have never had more than minor customer medical issues and minor mechanical issues while in the oceanic system. But you can bet that I think about these possibilities every time.

Nine things I know about flying in Maryland