Blog - Latest News
You are here: Home1 / Article Archive2 / I was there3 / I have chosen my place well 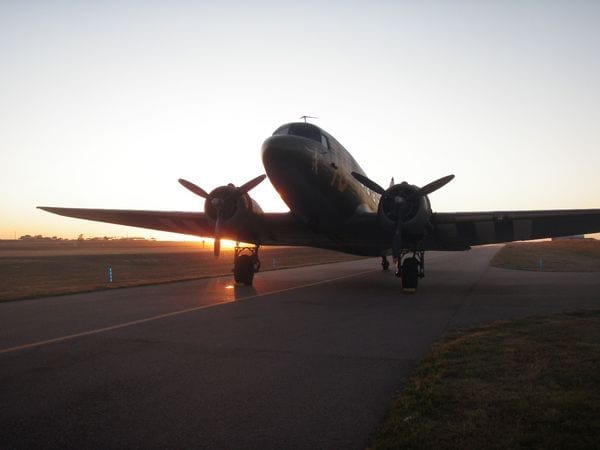 The stage is set…

Thinking about the position I’m in strikes me a little funny, and I imagine anybody who might see me would think it’s funny too: stretched out on the ramp with my head propped up on a tire of a C-47 reading a magazine. I must look like I just laid down and sprawled myself out! But actually, I planned it very carefully. I’m clear of the occasional drop of oil from the left engine but still in the shade.

I wonder about this stage I’ve set, but only for a moment because I’m not only keeping my flight suit spot free, but I can see a spectacular sunset about to unfold. It’s going to be just off to one side of my magazine and right under the wingtip. This spot will be perfect! All I have to do is wait and enjoy.

A quick glance at my watch tells me I have time for this theatre before we take off. Plenty of time to watch the puffy white clouds that drift slowly by, first turn yellow, then orange, and finally into black shadows as night sets in. It begins at the edges and slowly takes over the centers. First, it’s white on white, then orange on white, and finally gray on orange. I like to try and catch this change as it happens, but it’s always too gradual.

The house lights are slowly dimming as the show begins, the sun is setting and night awaits just off stage. I watch the curtain inch back to reveal the beauty of the twilight sky as day surrenders to night. It’s this last look that holds me so!

To fly in such a sky is to be at peace.

To fly in such a sky is to be at peace. And I will be at peace tonight as I guide my C-47 westward, home. I’ve already taken my turn on the jets. I’ve left my contrails way up high. For most of my life I had been up there because that was where I was supposed to be, flying the jets. All my boyhood hopes and dreams fulfilled. But I’m lucky now; that time has come and gone. Even after a lifetime of wishing and working for it, I’ve come to calmly let it pass. I’ve chosen to come home, back to the C-47. Back where I had only been briefly as a young man so many years ago with the call of the jets burning in my heart. Back while I still could. I didn’t know peace back then. I do now.

My copilot doesn’t know peace yet but maybe someday he will. For now, he listens to the call of the jets and waits impatiently for his turn. As I wait for sundown, he sits by the tail of the airplane throwing small rocks at an ant hill. When he hears the distant sound of the jets high overhead, he looks up and he wishes. I know he does – even an old man like me can still feel that pull. I watch him as he watches them. He eyes them until they are out of sight and I remember it was once me, wishing and wanting.

But I don’t envy him now, nor will I tomorrow.

Lately he’s been ribbing me about the way I feel. He accuses me of “has-been” thinking… I think I like that idea. I brandished youthful drive and ambition once, just as he does now. But like the jets passing high above us, that too has passed. No more struggle, no more striving… just me and the “Grand Ol’ Lady.”

From over my ears comes the crackling sound of cooling metal as my engine gives up its heat to the cool breeze of evening. The drops of oil are few, and they’re missing me. I have chosen my spot well. I have chosen my place well.

Mark Martin
At sixteen Mark started as a lineman at a local FBO and started flying lessons. By the time he was a sophomore in college, he was flight instructing. Flight instructing didn’t last long because he "landed" a job as a copilot flying the night mail on a Beech 99. He flew the night mail and carried a full college load until his senior year. From there, a stint with a few non-scheds until a thirty one year career with a major airline. Since retiring, Mark was SO lucky to find my way back to the DC-3 and intends to have the last logbook entry he ever makes be on the "Grand Old Lady."

One heck of a checkride