Blog - Latest News
You are here: Home1 / Article Archive2 / I was there3 / Dreaming of jets while flying a DC-3 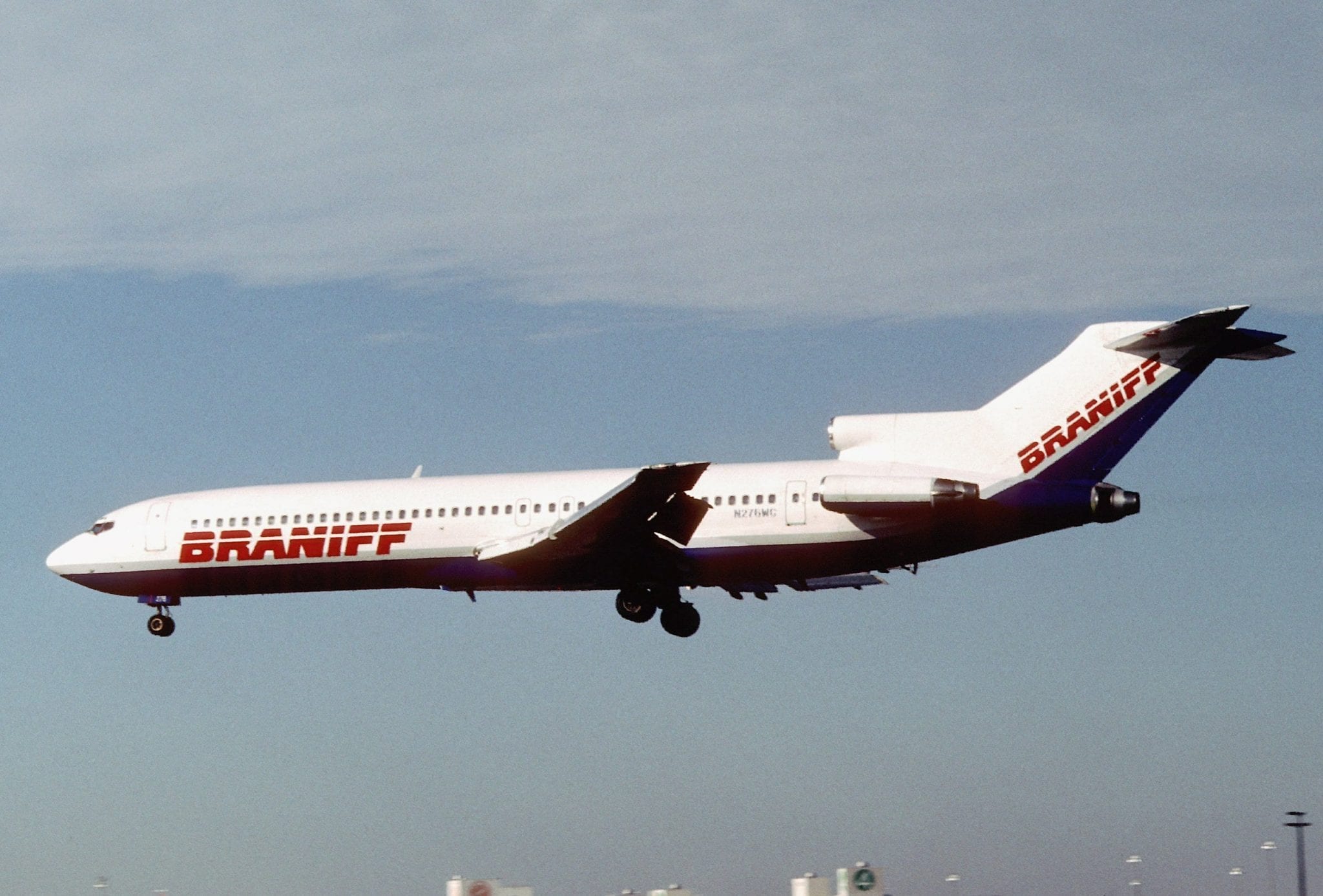 The snow was still on the toes of my boots, my fingers still numb as I tossed the Omaha freight up the sloped deck to the copilot. He stacked them on the pile we already had from Des Moines, heaviest ones forward.  A quick glance to the night sky and I was instantly thankful; a clear night and good flying weather. No moon trying to one up the layers of stars on stars.

It was clear, it was fresh with only a faint odor of exhaust from the nearby Braniff jet’s APU to remind us there were easier ways to fly for a living. Over there was hot coffee, hostesses, snacks from the galley. Over here, we could see our breath in the cabin. When will I be warm while flying airplanes? Not soon, I knew. How long before it’s my grabbing a snack from the galley instead of loading boxes? Not soon, I knew that too.

Flying freight in a DC-3 with a broken heater isn’t very glamorous.

But, this wasn’t the time for such thoughts, I had to get 462 back in the air again so maybe, just maybe, I could coax the ram air heater cuffs to give us a little warmth. My Beetle could spit out more heat than 462 and its heater was feeble at best. One more leg and I would be snuggling up with my nearly dead feet under the covers of the Hotel Muehlebach. I did a quick walk around inspection of our ship and the copilot strapped down the load. I hated 462! Next, Kansas City and the sanctuary of a warm bed.

My airline’s recent performance had been so abysmal, our contractor cut my route back to two legs instead of three. We wouldn’t proceed on to Memphis as usual. Rather, we’d overnight in the “Paris of the Plains” and I wasn’t too worried about whether 462 would obey my commands and do as I told it; we were light.

Like most of the DC-3s in our fleet, 462 had no heater. Like most DC-3s in our fleet, 462 had no business flying, let alone flying for hire. But 462 did have one distinction. It was the only DC-3 in our fleet of eleven whose landing gear could not be trusted to retract when the appropriate levers, latches, handles, and crossed fingers were actuated in proper order. Nope, 462 would sometimes obey and snug her big tires up into the nacelles when commanded after takeoff, or sometimes, just thumb her nose in defiance of the fretful pilots and let her Dunlops dangle.

Empty, a DC-3 could get away with a mutiny like that if the air was cool and the crew was quick. But a loaded DC-3 freighter would not fly if a stubborn landing gear was accompanied by the self-assassination of an engine. Many cockpits of loaded DC-3s have filled up with trees and dirt when a crew asked too much of it in such sad states of affairs. If that happened tonight, I figured I’d have a fighting chance at least. And I figured I was just good enough if I had to find out if I was good enough. I hated 462!

Inside the cramped Douglas cockpit, the copilot vigorously pumped the fuel wobble pump as I brought the DC-3 back to life. Outside our Douglas deep freeze, Braniff 405, a Boeing 727-227 stretch had started up and was smoothly pulling away from the gate. Even though our cockpit windshields were frosting over from our breath, I could see that sleek, beautiful Braniff jet’s silhouette gliding her way off the ramp. I hated 462!

Less than two years before, I had written a $5,000 tuition check, trained and then qualified on Braniff jets as a flight engineer, or Second Officer as they called them. As it exited the ramp, my mind was on that flight deck, not mine – I was “there” so to speak, and I knew exactly what the Second Officer would be doing then. Still facing sideways, he or she would be bent over the work table, microphone in one hand while copying down numbers radioed to the flight with the other.

With envy, I knew the SO would soon wrap up that duty and slide the seat left down the floor rail and swivel it to face forward for takeoff. Checklist in hand, the final items of the Before Takeoff checklist would be completed and all eyes would then focus ahead. I knew it because I had done it many times in the simulator. And for a moment, in my mind, I was there doing just that instead freezing in a tramp freighter and wiping frost from the inside of my windshield. I hated 462, especially tonight!

We were a fair distance behind the Braniff tri-jet when they powered up for takeoff and the business end of its engines made my Plexiglas sliding window shake and rattle. Enough that I thought it would jump off its tracks and land in my lap. Puffs of breath backlit in a flashlight beam brought me back to reality and we completed our checklist. Nevertheless, my mind was in that 727 cockpit. As the big Braniff jet climbed away, the twin white tail lights blended in with the brilliant stars of the cold Nebraska night beckoning, “This way, follow us if you can.” We couldn’t, not like that. How I hated 462!

The heater most definitely works on that 727. So does the coffee pot.

When we were cleared for takeoff, Braniff was already off my left shoulder climbing and accelerating fast. My mind flashed to the Second Officer duties that I knew were being performed as I watched it pick up speed. After the After Takeoff, Climb checklist was completed, the Second Officer would call in their times and it would have sounded like this:

“ARINC, Braniff 405 off report.” ARINC would then take the report down and send it to Braniff dispatch. In a few moments, we would be making the same report from a tramp freighter. It would sound like this:

“ARINC, Air Dallas 838 off report.” Same report, same purpose only transmitted by a hypothermic and frustrated Braniff wannabe. Because it was the copilot’s turn to fly, I would perform the non-flying pilot duties on his command. Duties that included the off report and checklist items, etc., etc. And “big deal” was all I thought. My sad mental soliloquy continued, “I’ve worked hard and long, it should be me using a Braniff call sign!” I wanted to be center stage in jets, not off to the side and cold, wrestling with an accumulation of airplane parts flying in loose formation.

When we were cleared for takeoff, it was all routine. Had there been anyone right behind us waiting, we wouldn’t have rattled their windows regardless of how close they might have been to us. But it was only us and Braniff sharing the cold sky that night. I looked again at Braniff and pretended to be there, not where I was. And I knew they would be busy at that very moment adding close to another one hundred knots to their climb speed. I knew it because I had done that too several times in the simulator. My current stage in life was clearly beneath me and I hated 462! Even though the DC-3 should have had all my attention right then, I slipped back to envisioning myself flying the Braniff jet. Then came this call:

My pomposity was now in full bloom when I dutifully made the next radio call. Just then, reality body checked me and I became the frustrated young actor who, in full Roman guard regalia and insulted when only granted one line for his stage debut, turns “Hail Caesar!” into “Sail Heeser!”

Instead of saying, “Omaha departure control, Air Dallas 838 is on runway heading,” I said, “Omaha departure control, Braniff 405 is…ah…ah…” I had just speared my sandal with my javelin; there was no face-saving recovery for the sin I had just committed. I was instantly back on the Braniff flight deck and I could see the three Braniff pilots looking at each other in disbelief. I could almost hear their belly laughs. I just knew the captain was saying, “Did you hear that moron? He thinks he’s us!” Oh the humanity! In a lineup of steely-eyed pilots, I was Mr. Bean.

As the row of Roman guards would have been focused on the murderer of that Emperor’s greeting, my copilot leaned over and asked, “What was that?” I said I didn’t know and made the correct call using the correct airline and correct flight number. But the damage was done. By this time, the Braniff jet was probably climbing out of 10,000 feet and accelerating to the next speed limit. I knew they were still shaking their heads and giggling. I just knew it!

But there was good news throughout this self-induced professional wedgie: 462’s landing gear had answered the call and retracted properly and snugly, and I was starting to get the feeling in my fingers back!

My Advice: Fly one airplane at a time!

Mark Martin
At sixteen Mark started as a lineman at a local FBO and started flying lessons. By the time he was a sophomore in college, he was flight instructing. Flight instructing didn’t last long because he "landed" a job as a copilot flying the night mail on a Beech 99. He flew the night mail and carried a full college load until his senior year. From there, a stint with a few non-scheds until a thirty one year career with a major airline. Since retiring, Mark was SO lucky to find my way back to the DC-3 and intends to have the last logbook entry he ever makes be on the "Grand Old Lady."