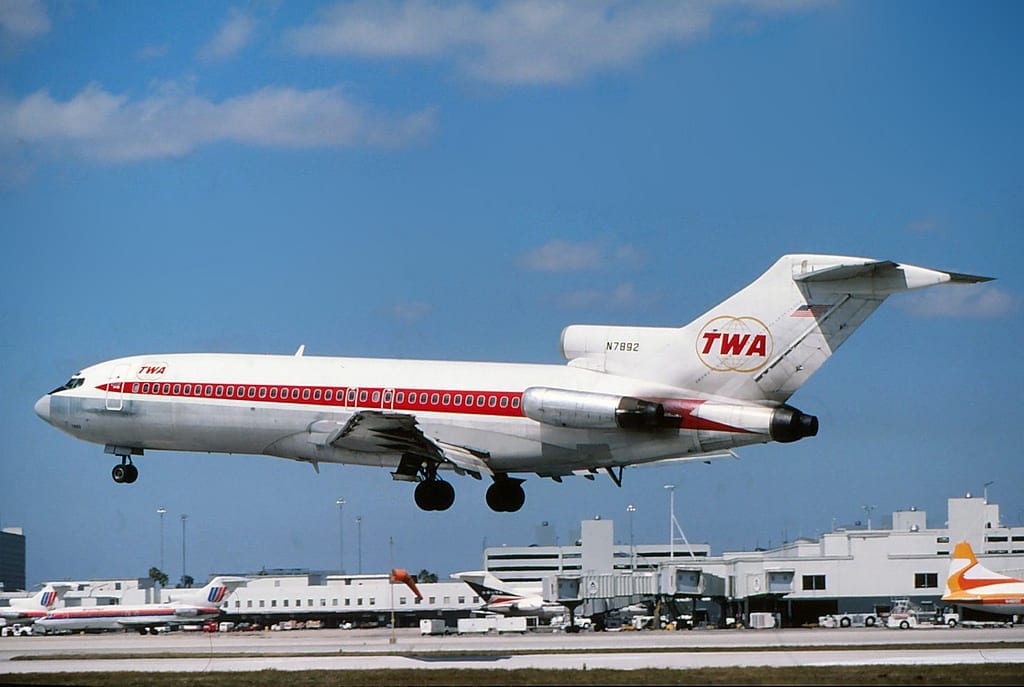 Captain Don Brown was involved in the Air Line Pilot’s Association (ALPA) many years during his career at TWA, spending much of that time as a member of ALPA’s System Grievance Board. Now that I think of it, membership on that board might have contributed to his very dry sense of humor. He wasn’t opposed to a bit of levity now and then, but something needed to be genuinely amusing before he’d laugh! Like most TWA captains, he shared flying duties with his co-pilots.

Please permit a moment of digression here. Among pilots who flew that aircraft frequently, the 727 acquired the nickname of “Miss Piggy,” and deservedly so! In thousands of hours in 727, I’ve seen some excellent pilots fly the machine, but only a precious few seemed immune to Miss Piggy’s revenge – the firm landing.

How bad can this landing be?

Captain Brown gave me the leg into St. Louis that day, and I flew the approach to 30R carefully, planning a good landing. The airspeed was exactly where it should be, the power settings were stabilized, there was little or no crosswind to correct for… the airplane was poised just inches above the runway centerline, in the touchdown zone! All that remained was to gently spool down the three engines, while waiting for the coming “greaser.”

After what seemed like an eternity, the 727 smacked the ground with a resounding thud. Immediately my mind pictured an ant struggling to remain afoot on a freshly stuck tuning fork: boooiiiinnnnggg! Miss Piggy had logged another pilot humiliation.

The firm landing didn’t knock any electrical generators offline or drop any oxygen masks, but the sudden silence it created in the cockpit was profound. Having landed on the outboard runway, each crew member focused on the busy-work of completing the after-landing checklist and getting safely into the parking area – carefully avoiding the urge to comment on the touchdown.

For me, the landing began an ego-reduction process. By the time Captain Brown parked the brakes at the gate it had shrunk to minuscule proportions, with additional shrinkage likely. While the engines whined down we completed the secure cockpit checklist. The Flight Engineer followed his usual practice of opening the cockpit door and telling the passengers goodbye.

The business-like atmosphere of the cockpit was suddenly disrupted by a woman standing near the engineer’s chair, carrying a small infant underneath a blanket on her shoulder. Her appearance was not at all attractive, but someone must have seen otherwise – hence the infant! In an elevated, almost hostile-sounding voice she exclaimed, “That was a horrible landing… it was so bad it made my baby puke on me!” Having vented her spleen, she and the infant stormed out of the cockpit and disappeared up the jetway.

At that moment I glanced across the cockpit to see Don Brown slumped over his yoke in laughter, and my now nonexistent ego had retreated into the minus figures.

A cabin attendant overheard the cockpit conversation, and accurately identifying a need for some comic relief, she inquired, “Wayne, did you make that landing?”

“Yes,” I answered reluctantly (expecting salt to be poured into the wound).

She answered, “In my opinion the landing jarred the infant’s eyes, and they focused for the first time on the mother!”

Since that day, whenever our paths would cross somewhere in the TWA system, Captain Brown would sidle up to me and whisper, “Hey Wayne, have you made any babies puke today?” His appreciation for the unscripted humor in that story is well received. It has, as a matter of fact, become a treasured memory.