Blog - Latest News
You are here: Home1 / Article Archive2 / I was there3 / A new kind of open cockpit – first flight in a Breezy 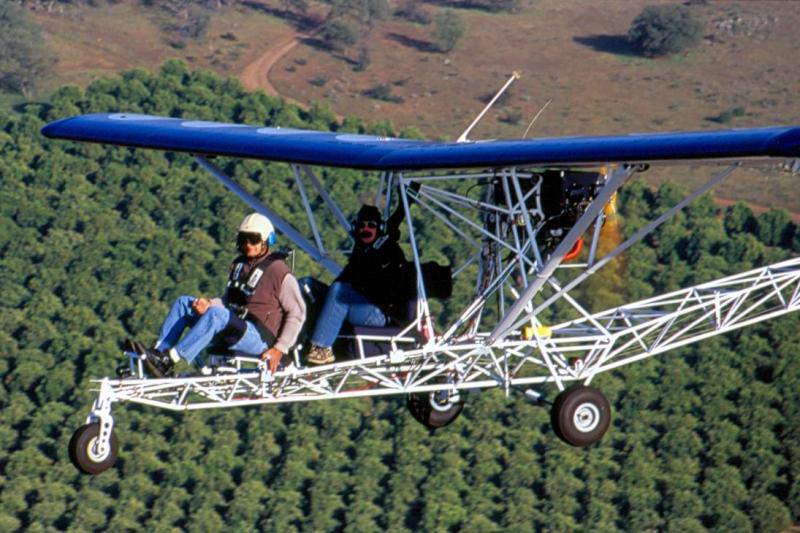 A home at Highcrest airport provides abundant opportunities to pilot a wide variety of flying machines, and my first flight in a Breezy was here… it is also one I am not likely to forget! An airport neighbor owned one, and on occasions I would watch him fly his airplane, and wonder quietly about flight without a windshield – or even a cockpit! That’s what was happening one blue-sky summer day when several airplane owners gathered beside our grass runway to watch our neighbor fly the Breezy. After landing and parking it in our midst, very little salesmanship was required to talk me into flying his airplane.

Had someone never seen a Breezy beforehand, it would have been very reasonable to ask why that name was chosen. Having looked at it, however, the answer to that question becomes plainly obvious. Its uncovered fuselage brings to mind immediately (except for the bubble) a MASH helicopter!

The pilot and passenger seats are tandem. A proven engine (Continental C-90) is mounted directly behind the two seats, in a pusher configuration. The control yoke is attached to a column which rises through the fuselage between the pilot’s legs. The throttle is conveniently installed near the pilot seat. A pre-flight observation of flight control integrity can be made, and a before takeoff check of control response can be observed from the pilot’s position. Standard rudder pedals, with toe brakes, are in normal locations. Nose wheel steering is readily available through rudder/brake application, making ground handling very predictable. Cessna 120 wings in their usual strut-braced, high wing configuration completes what is the finished flying machine. Well, finished in the builder’s eye, if no one else’s!

The stark openness of construction makes for easy inspection of areas like welded joints and other items critical to safety. This was a well-built machine. So, I was prepared to fly the airplane… but first, the owner’s briefing.

He stressed expected items like climb speeds, cruise RPMs, and approach speeds. I was somewhat surprised that his briefing also included making sure the helmet is securely attached to your head, the goggles are firmly strapped on and, to prevent pants legs from flapping wildly in the wind, the use of several strong rubber bands around each leg. With the briefing items firmly in mind, I fired up the Continental and was soon accelerating down the runway for my very first Breezy takeoff!

Following an uneventful lift-off, I paid close attention to maintaining the suggested climb speed of 70 miles-an-hour. On that subject, with absolutely nothing in front of me to use as a pitch reference; I quickly self-taught the relation of “tennis shoe” position, the horizon, and indicated airspeed. (First time I’ve ever needed to include footwear in an instrument cross-check!)

Everything feels different when there’s no cockpit.

The altimeter and the airspeed indicator were attached to the leading edge of the pilot seat, both easy to read with a quick glance between the legs. I was still climbing straight ahead to what I sensed was a “dizzying altitude;” a brief glance at the altimeter indicated I’d only gained about 400 feet since take-off! Perhaps a perception error caused by having no cockpit?

Establishing the bank angle for the first turn was an unexpected test of fortitude. Seeing nothing but ground beneath me during a bank is not something to which I was accustomed.

Continuing the climb, I eventually became more at home with the complete lack of structure surrounding me, and familiar with the peculiar instrument locations. I was even more relaxed making turns. When back within sight of the airport, I could see the group alongside the runway (which now included the owner) – and then it happened.

Unknowingly, the helmet strap had gradually loosened itself in the continuous wind and the helmet departed my head! In a nano-second my free hand grabbed the helmet, preventing passage through the propeller arc of the rear-facing engine directly behind me. Fortunately, the goggles remained in place. There I sat in a 90 mile an hour wind, helmet in one hand, and a control yoke in the other.

In that much wind I could barely keep a grip on the helmet with one hand, much less place it back on my head and fasten the strap. Any relaxation of the grip on the helmet was likely to cause it to strike the prop arc of the pusher engine – with dire consequences. Clamping the helmet between my legs appeared to be an acceptable solution, until I realized it would block my view of the airspeed and the altimeter. And my very first Breezy landing would be without those aids.

Finally I decided the safest option was to ditch the helmet in such a way that a prop-strike would not occur. During a low pass above the grass runway, in plain view of my friends, I threw the helmet briskly downward over the side so as to avoid any possibility of a prop strike. The multiple bounces it absorbed put some serious grass stains on its surface, but otherwise the helmet was undamaged.

Elimination of that distraction freed me to focus on landing the airplane with the aid of supporting instrumentation – normally. It was a non-event. That memorable flight is now a logbook entry, and vividly etched in my memory!

Helicopter techniques – (not) for dummies