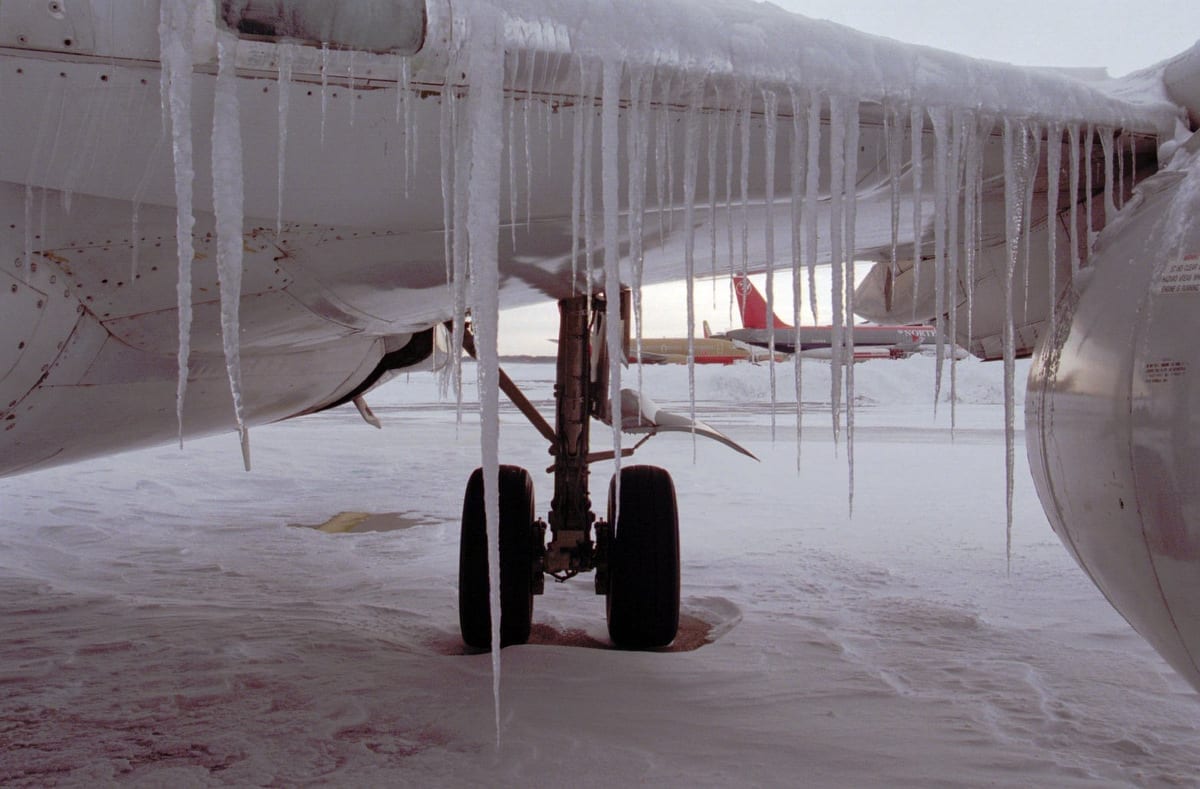 As the blizzard of 2016 was raging on January 23rd I, like many, watched a little TV. Also like many, I looked at the video of stranded motorists, stuck cars, cars in ditches, and traffic snarls and wondered what in the world possessed those people to make them try to go somewhere. It was a well-advertised storm and there was plenty of time to take cover after the NWS warned of incoming.

What possesses people to go out in conditions like this?

Then I scratched my head and remembered what possessed me when I used to challenge snowstorms in little airplanes. I was big on running the traps as scheduled and a blizzard was no excuse for not being there. So, having lived in the northeastern United States, in the Washington/ Philadelphia/New York corridor, for most of my life I had ample opportunity to do this. I’ll tell you about three blizzard encounters. There were many more but these seemed the best illustrations.

When the day started in Kerrville, Texas where I was visiting Mooney, there was not much hint that an April blizzard was coming. The same was true in Europe, where airlines were preening their fleets for North Atlantic runs. Never the twain shall meet. Just wait.

​Berl Brechner was on the FLYING staff at that time and was with me. He was ferrying a Mooney 231 from Kerrville back to the Baltimore area, to a small airport. I think it was Freeway. To juice up the trip we were going to make it a cross-country race between my P210 and the Mooney 231.

I’ll get the race out of the way first. It was close except on gas where the 231 was the handy winner.

We picked Nashville for a fuel stop and as we cruised along at Flight Level 190 and 210 my curiosity about the weather was piqued. Something was brewing. The reports and forecasts were going downhill. A thorough check while on the ground at Nashville suggested that the last part of our trip would be eventful. A coastal low had formed and was making mischief.

​Berl wanted to deliver that Mooney to the little strip but it would be dark, there would be a ceiling, and the wind would be howling out of the north. I prefer a lot of acreage and navaids for weather like that so BWI became the destination.

The forecast didn’t disappoint. The bumps were really big on the approach into BWI and the airplane squirmed around a lot on the taxi in.

What was this? It looked like there were airliners all over the place, parked on available ramp space and on a runway that had obviously been closed. Two of the airliners were Concordes and most of the rest were 747s. The April blizzard took everyone by surprise and all these flights had diverted to BWI when JFK was shut down. I started in Kerrville, they started in Europe, and we all wound up at BWI.

Ground control told us to contact the FBO before reaching the ramp and they politely asked what we wanted and told us they were quite busy. All the passengers were stuck on the airliners and there was demand for fuel so they could run the APU and keep people warm. There was also the business of emptying something but I avoided getting the details on that.

Berl left the Mooney at BWI, to be picked up the next day. We flew on to Mercer County Airport in New Jersey, my base at the time, almost missed the approach there because of blowing snow, and got some late evening exercise moving snow to get the airplane in the hangar and the cars out of the hangar.

I was headed from New Jersey to what we called the helicopter show in Long Beach. The original plan was to go all the way that day. Patrick Bradley of the FLYING staff was with me so I’d have help with the flying.

We almost didn’t get from the New York office to my home in New Jersey the night before because they shut the northeast corridor rail service down right after our train left Penn Station.

The first airplane out of the blizzard? 40RC.

The next morning, on what should have been a stay home day, Patrick dug out the car at home and we headed for the airport. It was closed with snow removal in progress. We worked on the hangar for a while and then I went and talked to the airport crew.

They said they hoped to get the airport opened by mid-afternoon. That meant the primary runways and the taxiways to the airline terminal. My hangar was pretty close to one runway and I pled my case.

We went home for a while and were back at the airport at three in the afternoon. I did some more lobbying and, as it was getting dark, a front end loader showed up and freed my little green airplane from the surly bonds of snow and a plow made a path to the runway. We took off and flew into the night, all the way to Tulsa before stopping for a rest.

As we flew along we were solo, as in the only airplane flying. Several controllers asked if we knew we were the first, and, so far, the only airplane out of the whole area. $20 dollar bills had done wonders on that snow. It would probably take $100 bills today.

We flew on to Long Beach the next day and when we got to the convention we were the first (other than the advance parties) to arrive from the east coast. The airline travelers straggled in over the next day or so. Score a big one for private air transportation.

Why not N40RC? This was after that last really big blizzard, twenty years before the most recent, and old 40RC was still snowed in at Hagerstown. Frederick airport had a runway and some ramp cleared and Frederick Aviation had that Piper Saratoga that I could rent.

This was a far more important trip than when I was running the traps for business. My wife Ann was in Westchester County to be with our daughter Sarah who was recovering from surgery. They had been snowed in at Sarah’s one-bedroom apartment since the storm shut everything down on Monday. Ann called me and said I had to come get her not later than Saturday. Period.

If you know what you’re doing, general aviation can fly before the big boys even get de-iced.

Bill Caudell at Frederick Aviation told me I had to get back before dark because the runway lights were buried under several feet of plowed snow. There had been another 12 inches on Friday, on top of the earlier 32 or so. The road to the airport was barely passable and I asked my Mooney-owner friend and neighbor Michael Boyd if he’d like to go along for the ride. That was the least I could do after asking him to take me to the airport in his 4-wheel drive GMC pickup.

​I called the FBO at Westchester and was told that the airport and especially the ramp was marginal. Yes, I could pick someone up but I had to leave immediately. Worked for me.

​The airport was a mess as was the ramp. The runway had been cleared, probably many times, but blowing snow had left patches of all types of frozen stuff on the surface. The takeoff was not without footwork because when you go from frozen stuff to bare pavement it is important to have the airplane pointed and going in the same direction when the transition is made.

​I flew between Maryland and Westchester many times but the beauty of the snow cover that day was incredible. The heavy white mantle almost made features indistinguishable.

​Landing at Frederick, maybe 30 minutes before sunset, was pretty special, too. With the snow piled high to each side and the runway itself covered with packed snow, it was like landing in an all-white hallway. I felt like I had done a day’s work.

As we were taxiing in, Ann said, “Thank you, Richard.” The way she said it made my day’s work perfect.